Storms head for the United Kingdom 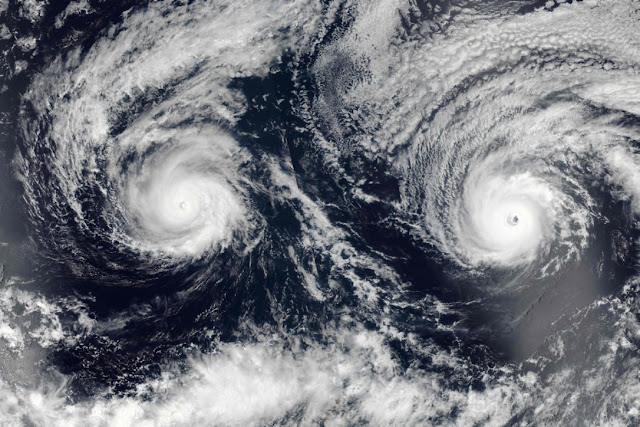 The British Isles could be struck by 2 hurricanes that merge into one in about a week, if the remnants of Atlantic hurricane Maria fuse with another hurricane named Lee.

Violent gales and torrential downpours will bring chaos across the country with power and transport networks facing severe disruption.

The latest weather models show Hurricanes Lee and Maria – currently located off the east coast of the United States – merging in the mid-Atlantic Ocean to form a colossal new storm.

Hurricanes Maria and Lee are currently both at Category 1, in the mid Atlantic Ocean. The projected path of the storm, which will be renamed Brian if it hits the UK mainland, is to strike Ireland first and then Britain.
Reports on “Storm Brian” before the hurricane became a reality are strange. UK Media was writing enthusiastically about it, naming “Brian” before it even became a storm, and several articles seem to be anticipating it with a sensational delight.

Atlantic storms are named by an entity called the Met Office. They released the names of the next 6 expected storms to hit Britain this year in advance (Brian, Caroline, Dylan, Eleanor, Fionn and Georgina).

According to Jim Dale, forecaster for British Weather Services:

Both hurricanes are located around the northeast coast of America but we expect them to get together around Sunday. The jet stream is powering up and as it swings southwards towards the end of the week it will help steer the remnants of these storms towards us

Both of these are powerful systems and when they get caught up in the jet stream they could be given more life.

Britain could easily have seven storms named by the Met Office by Christmas. Storm centers will travel just north of Scotland, leading to rain to batter much of Scotland each time they pass through. Storms’ impacts are likely to be significant.

A more active autumn and early winter storm period is expected this year, due to a positive North Atlantic Oscillation.