Stephen Cohen: Why no opposition to the New Cold War?

" ... the systematic demonization of Putin several years after he came to power in 2000." 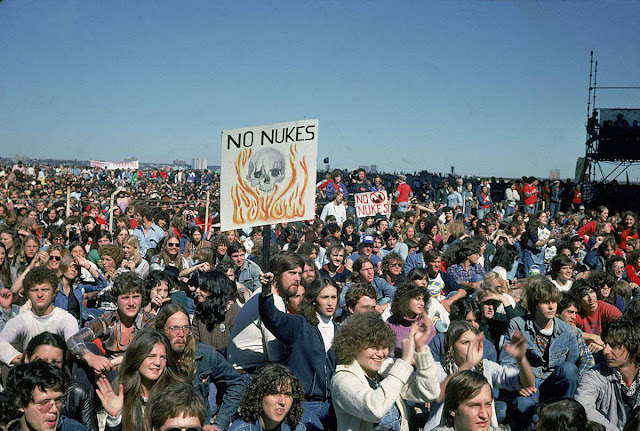 Why, unlike during the preceding 45-year Cold War, is there no significant American mainstream opposition to the new (and more dangerous) one? Cohen poses this question as a kind of paradox for tonight’s discussion and formulates it as follows:
During the preceding Cold war, especially from the late 1960s through the 1980s, there were many anti–Cold War, or pro-détente, voices in the American political-media mainstream.

Part 1 of the podcast:

This was the case in Congress, the White House, in the most influential print and broadcast media outlets, at universities and think tanks, at the grassroots level, in elections—and even in major US corporations. (CEOs founded the original American Committee for East-West Accord decades ago, which Cohen and others recreated not long ago. See eastwestaccord.com.)

That is, public discussion and debate about US relations with Russia were the norm during the preceding Cold War, as befits a democracy. As an example, Cohen recalls that the first President George Bush convened at Camp David, in November 1989, virtually his entire national-security team to attend a debate between Cohen, then at Princeton, and Harvard professor Richard Pipes on the pressing issue of whether détente with the Soviet Union under Mikhail Gorbachev should be expanded or reversed.
Today’s Cold War is even more dangerous in important ways. Its epicenter is not in faraway Berlin but directly on Russia’s borders, in Ukraine and the Baltic states. Mutually restraining rules of conduct, developed after the 1962 Cuban missile crisis, scarcely exist, as illustrated by ongoing tit-for-tat sanctions that could lead to a full rupture in diplomatic relations between the world’s two nuclear superpowers.
Cooperative relations and institutions nourished over decades are unraveling or already nullified. A renewed nuclear-arms race, once thought relegated to the past by Reagan and Gorbachev, is already under way, along with provocative conventional-arms maneuvers on both sides.
Today’s Kremlin leader is demonized irrationally in the United States in ways that Soviet leaders were not. And, of course, neither Russia nor its political ruling class is any longer Communist but instead professed capitalists and, mostly, religious believers.
And yet, today there is no significant anti–Cold War opposition in mainstream American politics—few, if any, such voices in Congress, in the most influential newspapers or on leading television/radio broadcasts, in either major political party, at universities or most Washington think tanks. Even the once large-scale, well-organized grassroots anti-nuke movement that animated pro-détente politics in regional elections has all but vanished.

Public debates and political struggles btween “hawks and doves” on Russia policy no longer exist in mainstream America. Everywhere, hawks prevail and the doves are silent, even in corporations with major investments in Russia.
Cohen cannot explain this exceedingly dangerous paradox, only comment on some possible or partial explanatory factors:
§ Most recently, widespread hostility to President Trump and demonizing of Russian President Putin have become major factors. Mainstream American political, media, and other figures skeptical about current US Russia policies worry about being labeled “pro-Trump,” who campaigned in favor of more US-Russian cooperation, or “pro-Putin.”
That anyone need worry about such slurs is deplorable, but that they do is perhaps understandable.

But the new Cold War began long before Trump, as a bipartisan policy with little if any opposition, and the systematic demonization of Putin several years after he came to power in 2000. (Cohen refers here to the latter chapters of the expanded paperback edition of his book Soviet Fates and Lost Alternatives.) So this alone is not an adequate explanation.

§ Neo-McCarthyism, which has grown considerably since Trump’s election in 2016, has certainly stifled anti–Cold War opposition. As official investigations into alleged “collusion with Russia” grow more promiscuous and well-funded campaigns to ferret out purported “Russian disinformation” in the US media unfold, a self-censoring chill has descended on political life.
No one wishes to be suspected of “collusion with the Kremlin” or of conveying “Russian propaganda”—or worse. (In this regard, Carter Page seems to be the first to have filed a defamation suit against a major American news outlet.)
This is not, of course, merely self-censorship. Major media outlets regularly exclude critics of US Russia policy and proponents of alternative approaches from their news reports, op-ed pages, and TV and radio panels. This, too, is not, however, a full explanation.
Media often reflect currents in the larger political establishment and in society.

§ There is considerable talk about a “deep state” that has thwarted semi-détente initiatives first by President Obama and now by President Trump, an invisible power that may even have created “Russiagate” for that purpose.

Cohen, however, is not certain about what is meant by a concealed “deep state,” since high-level cold warriors are amply visible and audible, from Hillary Clinton and her well-funded acolytes to Obama’s intelligence chiefs and the editors and producers of leading media outlets. “Deep state” may just mean America’s most powerful political elite.
§ On the other hand, some have argued over the years, and again today, that the persistence of Cold War politics and weakness of anti–Cold War opposition is best explained by a nativist American social tradition that “needs an enemy,” and more often than not Russia has been assigned this role.
Having grown up in Kentucky and lived in Indiana, Florida, and New Jersey, Cohen finds no evidence for this “blame the people” explanation. The fault lies, he is convinced, with America’s governing elites.
§ This is a separate, longer discussion, but Cohen points to two recent developments, both subsequently blamed significantly on Putin. The first was the collapse of US political-media elite expectations that post-Soviet Russia would become, during the “transition” of the 1990s, Washington’s junior and compliant partner in world affairs.
When those expectations and related US policies ended in disaster in the late 1990s and Russia took a different course after 2000, Washington elites blamed not their own illusions and ill-conceived policies but Putin. And they continue to do so.
More recently, but similarly, as the US-led international “order” created decades ago crumbles, from Europe to the Middle East, with disparate symptoms from Brexit to Trump’s election—again, US elites and “thought leaders,” rather than consider profound historical changes and their own prior policies, resort to blaming Putin’s Russia.
However explained, Cohen concludes, the near-total absence of significant anti–Cold War opposition in American politics today is a grave threat to democracy and international peace.
Stephen F. Cohen is a professor emeritus of Russian studies and politics at New York University and Princeton University.
Source: The Nation