The results of the Iraqi Kurdistan referendum on secession are in, with over 92% of the voters in favor of seceding from Iraq. Iraq’s Prime Minister Hayder Abadi has threatened military action in retaliation. 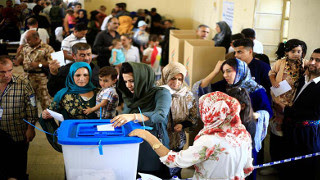 In fact, Abadi is now demanding that the Kurds totally cancel the vote, even though it’s already taken place and the results are already in, saying he will “never discuss” the results of the referendum because Iraq’s parliament didn’t give them permission for it.

Iraqi officials seem to be throwing everything at the situation in Kurdistan now and seeing what sticks. Demands for the Kurds to surrender their airports have been spurned, and Kurdish officials had ruled out returning to Baghdad’s rule before Abadi’s latest demands were even made.

Abadi’s threats are getting increasingly bellicose, however, ruling out any negotiation and vowing to “impose Iraq’s rule” in all parts of Kurdistan, amid reports both Iran and Turkey are negotiating to get involved in an anti-Kurdish war.

Both Turkey and Iran have Kurdish minorities, and both fear having their own secessionist movements as a spillover from this vote. At the same time, a general war against Kurds seems likely to exacerbate tensions internally for all nations involved.

Where the US is going to end up remains anyone’s guess, as the Trump Administration has come out against Kurdish secession, but their long history of supporting the Iraqi Kurds likely precludes endorsing a regional war against them to prevent their self-determination.

Posted by seemorerocks at 19:15