Severe weather, crop failures will get worse and worse "faster than previously expected" (by just about anyone other than Guy McPherson) and we may know nothing of the underlying changes. 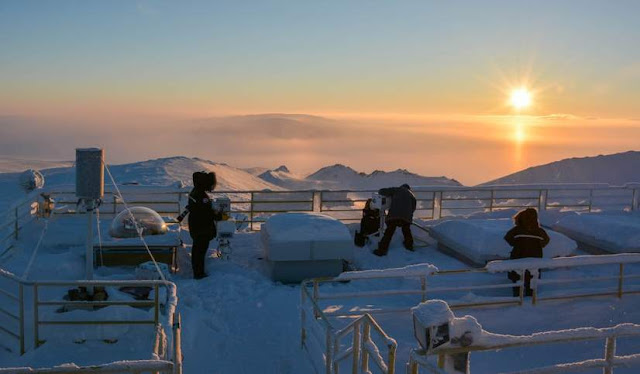 Essential information on Arctic climate change, ozone depletion and pollution reaching the Arctic from B.C.’s recent forest fires will be lost unless the federal government comes through with funding to save Canada’s unique high Arctic research station.

After years of funding cuts to scientific and climate change programs under the Conservatives, the Liberal government’s emphasis on making science-based decisions in response to climate change was a welcome relief to researchers, but some are now shocked that crucial projects are about to be lost because the 2017 budget did not renew the five-year Climate Change and Atmospheric Research (CCAR) funding which expires this year.

Unless the Trudeau government comes up with approximately $7-million a year, six projects, including the Polar Environment Atmospheric Research Laboratory (PEARL) on Ellesmere Island, will close down next year. A seventh — Canadian Sea Ice and Snow Evolution Network — will shut down the following year.

The projects, in addition to providing vital information about climate and atmosphere, serve as training grounds for up-and-coming researchers at Canadian universities.

If funding is not renewed it will mean gaps in data that has been painstakingly collected over the last 12 years and will also mean an exodus of young scientists, predicted James Drummond, PEARL principal investigator.

“I can’t imagine how many researchers will be looking for positions in other countries. This would dislocate research programs and mean we can’t progress with the knowledge we have been working on. The time sequence of measurements will be lost,” Drummond said.

In addition to PEARL, other threatened projects are the Network on Climate and Aerosols, Canadian Arctic GEOTRACESProgram, Ventilation, Interactions and Transports Across the Labrador Sea (VITALS), Canadian Network for Regional Climate and Weather Processes and the Changing Cold Regions Network.

PEARL has operated in Nunavut, about 1,100 kilometres from the North Pole, since 2005 and research has focused on ozone gaps and pollution and, most importantly, climate in the high Arctic, where changes are taking place at a much faster rate than in the south.

Lab team members out for a hike near the PEARL research centre in Nunavut. Photo: Dan Weaver via CREATE ArcticScience

“We are one of very few stations in the high Arctic. We are right at the top of Canada. Some maps cut off before they get to us,” Drummond said.

“We are also one of the very few stations operating 365 days a year… I think the government needs to get a grip on this and realize how important it is,” he said.

Without funding, mothballing plans will get underway early next year and the operation is already being affected as it is not known whether new equipment should be purchased and shipped up to the station, Drummond said.

It is not the first time PEARL has faced such a crisis. Mothballing plans were underway in 2012 when the Harper government cut the previous program, the Canadian Foundation for Climate and Atmospheric Services. However, at the last minute, after an outcry by scientists and the public, the CCAR program was announced.

Stable funding is needed in order to do good research, said Drummond, adding that he is an optimist and believes that the Trudeau government will come through with the cash once the importance of the programs is understood.

The budget set aside $73.5-million over five years to set up a Canadian centre for climate services, but that funding does not appear to support networks funded by CCAR.

In an emailed statement, in answer to questions from DeSmog Canada, Minister of Science Kirsty Duncan said the Liberal government is doing more to combat climate change than any other government in history.

“While the CCAR program has reached the end of its funding cycle, officials are working with researchers to find other avenues of support, including through the approximately $50-million in climate change research that the Natural Sciences and Engineering Research Council funds annually,” she wrote.

“As a researcher who led an expedition to the Arctic, I know we need a thoughtful, comprehensive approach to Arctic research — one that includes indigenous voices and the role of traditional knowledge. I am working to deliver on this ambitious vision,” Duncan said.

But time is running out, according to Duncan and she is pleased that PEARL is now getting a boost from the group Evidence for Democracy, which has launched a petition asking Duncan to reinstate stable funding.


“With the impacts of our changing climate already being felt in Canada and around the world, investing in climate science is a necessary part of ensuring that our decisions and actions around climate change mitigation and adaptation are based on up-to-date science and evidence,” says the preamble to the petition.
Katie Gibbs, Evidence for Democracy executive director, said the group was surprised at the funding cuts.

“(The projects) seem to fit very well with the government’s stated priorities acting on climate change according to science. That’s exactly what this research does,” she said.

The funding appears to have fallen through the cracks and government initially seemed to be taken by surprise. However, months after it was brought to their attention, no solution has been presented, so it is necessary to let Canadians know what is being lost, Gibbs said.

The petition was launched Friday and already has over 1,500 signatures, including many scientists, she said.

“I have been in touch with a number of the principal investigators of the networks that are going to have their funding cut and they are very alarmed… We are losing a whole funding stream dedicated to climate research and it doesn’t seem there is any other funding to replace that,” she said.

In the grand scheme of federal government finances, $7-million annually is a relatively small amount to spend on unique and important research, Gibbs said.

“Over 300 students have been trained at these research networks over the past five years of this grant, so it’s not only paying for the current professors, it is also necessary for training the next generation of climate scientists,” she said.

Posted by seemorerocks at 20:17