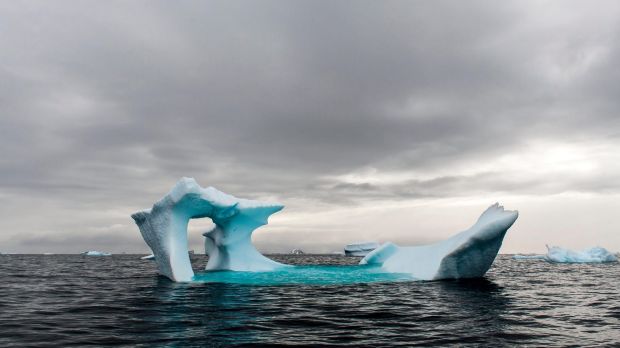 Blue iceberg floating in the sea near Cierva Cove on the Antarctic Peninsula.

Sea ice around Antarctica has shrunk about 2 million square kilometres in just three years, swinging from a record large maximum area covered to a record low, in a shift that could have implications for the global climate.

While a late burst in ice cover this spring cannot be ruled out, it appears the sea ice around Antarctica has peaked for the sea at about 18.013 million square kilometres, the smallest maximum extent in the 30-plus years of satellite readings, Jan Lieser, from the Antarctic Climate and Ecosystems CRC, said.

As big as Bali, the loss of the Larsen C ice shelf will require maps to be redrawn and could ultimately cause sea levels to rise.

"It looks like we have passed the peak," Dr Lieser told Fairfax Media, adding the sea ice "is being attacked from two sides", from above and below.

For Antarctica, the lowest maximum extent, recorded on September 12, follows a record low minimum sea ice coverage recorded on March 1 after the summer thaw, he said.

As with the Arctic, the warming oceans are undercutting sea ice from below, while the warming atmosphere is melting ice from above.

Antarctica's variability, though, makes it a more complex problem to understand than its polar opposite.

For instance, the freshwater from melting land-based glaciers more readily freezes than salty sea water, increasing sea ice in some regions of the continent.

Zack Labe, an ice researcher at the University of California, Irvine, cautioned against a definitive call that maximum sea ice coverage had been reached this year.

Melting is going on at both ends of the planet, with Antarctic and Arctic sea ice extents reaching record lows in the past year. Photo: Richard Harker\

He noted the first week of October in 2015 had a large net increase of sea ice after an extended retreat. (See chart below from the US National Snow and Ice Data Center.) 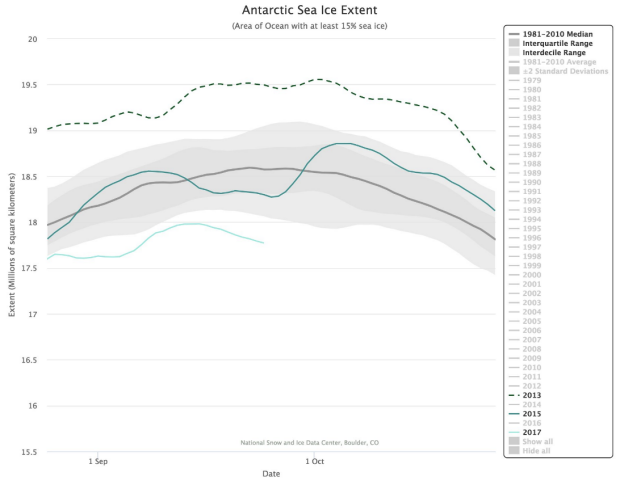 "Antarctic sea ice extent is particularly variable day-to-day, given weather conditions, and it's worth waiting another week," Mr Labe said.

Those conditions include wind and wave action that can bunch sea ice or spread it out.

"This year's maximum is a far cry from the 20.201 million square kilometres record maximum we had in 2014 and shows the highly variable nature of sea ice around the Antarctic continent," Dr Turner said.

"[On 25 September], the ice extent had fallen to 17.689 million square kilometres so it's highly unlikely that the extent will increase by much over the next few weeks and we can assume that we've seen this year's maximum."

Even if the record low maximum wavers slightly, the Antarctic sea coverage is well shy of the average of about 19 million square kilometres over the past three decades or so, Dr Lieser said.

(See the latest NASA satellite image of Antarctica below.) 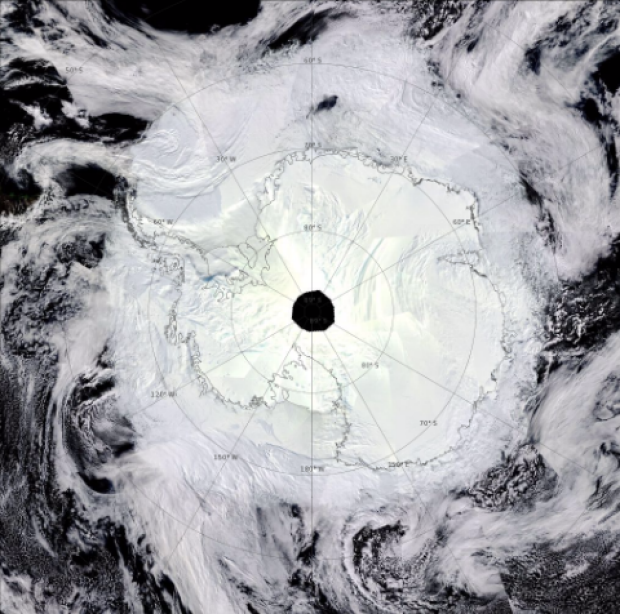 While the climate change signal is much clearer in the northern latitudes - where longer-term records show a relatively steady retreat of Arctic sea ice - evidence of global warming's impact around Antarctica is also showing up in the observations.

"We see an increase in the storminess of the Antarctic, and that's obviously redistributing the sea ice around" the continent differently, Dr Lieser said.

"Maximum sea ice extent is attributed to that change in wind patterns."

The storms can also have an impact "far and wide", including on Australia's weather, he said.

Scientists are less sure of the trends in sea ice volume in the southern hemisphere than in the north, given the difficultly satellites have in distinguishing sea ice from the snow that has accumulated on it, for instance.

Understanding such processes, though, is "critically important to understanding the climate of the earth" because of the way sea ice formation works as the initial driver of the global ocean "conveyor belts", Dr Lieser said.

When sea ice forms, brine from salty sea water is expelled. As it sinks by gravity, it draws in surface water, helping to disseminate warm tropical heat towards the poles.

There is no sign yet of a slowing in the major over-turning circulation belts, such as the Gulf Stream that transports warmth from the Gulf of Mexico to northern Scandinavia, keeping that region much more habitable.

Disturbing one variable in such complex systems can have "major implications" on the global climate, he said.

(See US National Oceanic and Atmospheric Administration chart below of percentage changes of sea ice concentration in September, compared with previous years in the satellite era.) 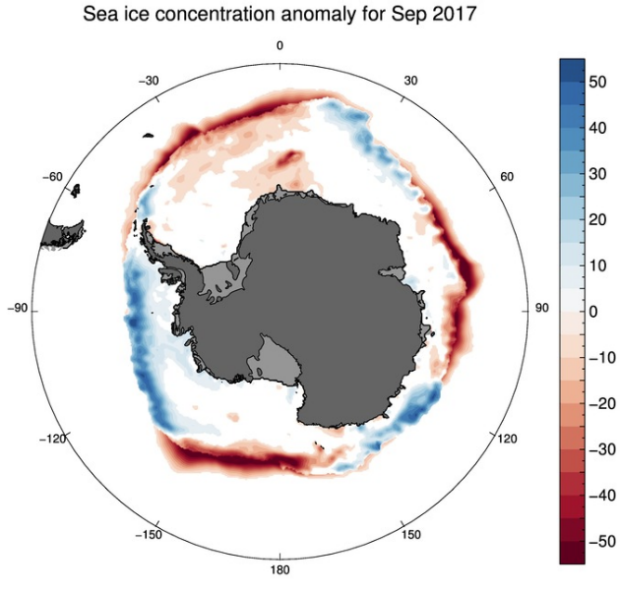 Dr Lieser is one of more than 60 representatives from 12 countries gathered this week in Hobart to discuss sea ice, including how it is beginning to affect ship traffic


"We have seen a number of private and commercial ships becoming stuck in the Antarctic sea ice in recent years, which have led to costly rescue operations that can delay scientific work," he said.
Posted by seemorerocks at 12:37