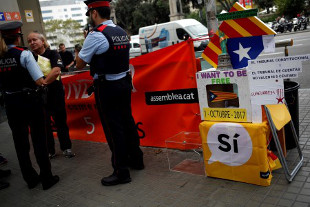 The Catalan government has sent a letter to the European Commission asking them to support an open Internet across the union, after the Spanish government blocked websites related to the October 1 secession referendum.

The blocking of the websites is the latest in a long line of Spanish police efforts to undermine the upcoming vote. On top of taking down the sites, Spanish police also summoned 14 people for “disobedience” for having mirrored the referendum website.

All indications are that the referendum will take place irrespective of Spanish police efforts to prevent them. The Spanish government, however, maintains that they’ve discredited the move enough that the vote won’t count.

Despite ever-growing national police operations in his region, Catalonia’s Foreign Minister Raul Romeva has echoed the sentiments of other top Catalan officials, vowing the October 1 referendum on secession will take place as planned.

Spanish officials continue to step up the crackdown, and now say it is there intention to have national police physically occupy every voting station in Catalonia to ensure that no votes are cast. How practical this is remains to be seen, as ballot papers have already been passed out en masse for days.

Catalonia remains confident. “I don’t have any doubt,” Romeva insisted, adding that Catalan officials have found ways around everything that the national government has done so far, and that they can print as many ballot papers as needed.

Spain has sent thousands of additional national police into Catalonia, and has tried to nationalize all local police therein. The effort with the local police has had mixed results, with the Catalonia Interior Ministry resisting such demands.

Posted by seemorerocks at 19:45

Email ThisBlogThis!Share to TwitterShare to FacebookShare to Pinterest
Labels: Spain