The US declaration of war on Russia

The U.S. Central Command in the Middle East wants the oil fields in east-Syria under control of its proxy forces to set up and control a U.S. aligned Kurdish mini-state in the area. The Syrian government, allied with Russia, needs the revenues of the oil fields to rebuild the country. 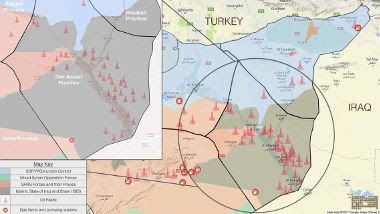 Yesterday the Russian Ministry of Defense accused the U.S. military in east-Syria of direct collaboration with the Islamic State:

“Despite that the US strongholds being located in the ISIS areas, no screening patrol has been organized at them,” the Russian Ministry of Defense said. 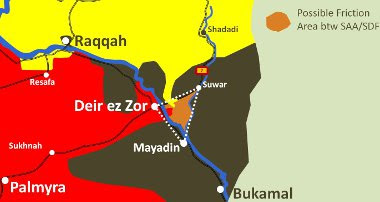 The accusations are plausible. Large parts of ISIS in Deir Ezzor consist of local tribal forces from eastern-Syria. U.S. special envoy Brett McGurk recently met tribal leaders who had earlier pledged allegiance to ISIS. Deals were made. As we wrote:

The U.S. diplomat tasked with the job, Brett McGurk, recently met with local tribal dignitaries of the area. Pictures of the meeting were published. Several people pointed out that the very same dignitaries were earlier pictured swearing allegiance to the Islamic State. 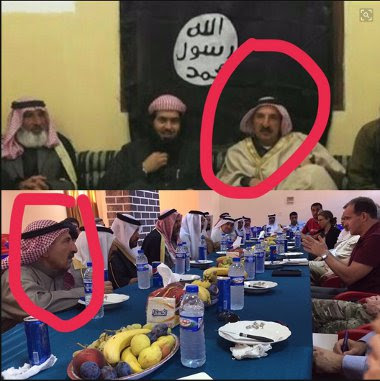 Just like during the "Anbar Awaking" in its war on Iraq the U.S. is bribing the local radicals to temporarily change over to its side. This will help the U.S. to claim that it defeated ISIS. But as soon as the payments stop the very same forces will revert back to their old game.

The local criminal Ahmad Abu Khawla, who had earlier fought for ISIS, was suddenly installed as commander of a newly invented "Deir Ezzor Military Council", set up under U.S. special force control.

Last night a Russian three-star general and two colonels were killed in a mortar attack while they visited a Syrian army headquarter in Deir Ezzor:

Lieutenant-General Valery Asapov, of the Russian armed forces, has been killed after coming under shelling from Islamic State (IS, formerly ISIS/ISIL) militants near Deir ez-Zor, the Russian Defense Ministry has announced.

In its statement, the ministry said that Asapov was at a command outpost manned by Syrian troops, assisting commanders in the liberation of the city of Deir ez-Zor.
...
Lieutenant-General Valery Asapov is the highest-ranking Russian officer to be killed in the Syrian campaign. He was a commander of the 5th Army in Russia’s Eastern Military District, one of the four strategic commands in the Russian Armed Forces. The army is based in Russia’s Far East, in the city of Ussuriysk, some 98 km (61 miles) from Vladivostok.

For three years ISIS had besieged Syrian troops in Deir Ezzor city and its airport. It had not once managed to successfully attack the Syrian headquarter or to kill high ranking officers. Now, as U.S. proxy forces "advised" by U.S. special forces, have taken position north of Deir Ezzor, "ISIS" suddenly has the intelligence data and precision mortar capabilities to kill a bunch of visiting Russian officers?

That is not plausible. No one in Damascus, Baghdad, Tehran or Moscow will believe that.

The Russian military, as usual, reacts calmly and officially attributes the attack to ISIS. Doing so avoids pressure to immediately react to the attack. (The U.S. will falsely interpret this as a face-saving Russian retreat.)
But no one in Moscow will believe that the incident is independent of other recent maneuvers by the U.S. forces and independent of the earlier accusations the Russian military made against the U.S. forces.

Nominally the U.S. and Russia are both in Syria to fight the Islamic State. The Russian troops are legitimately there, having been invited by the Syrian government. The U.S. forces have no legal justification for their presence. So far open hostilities between the two sides had been avoided. But as the U.S. now obviously sets out to split Syria apart, openly cooperates with terrorists and does not even refrain from killing Russian officers, the gloves will have to come off.

"Accidents" and "incidents", like an "ISIS mortar attacks", or unintentional bombing of troop concentration of the other side, can happen on both sides of the front. Cars can blow up, bridges can collapse. Any U.S. officer or civilian official in the larger Middle East should be aware that they too are now targets.