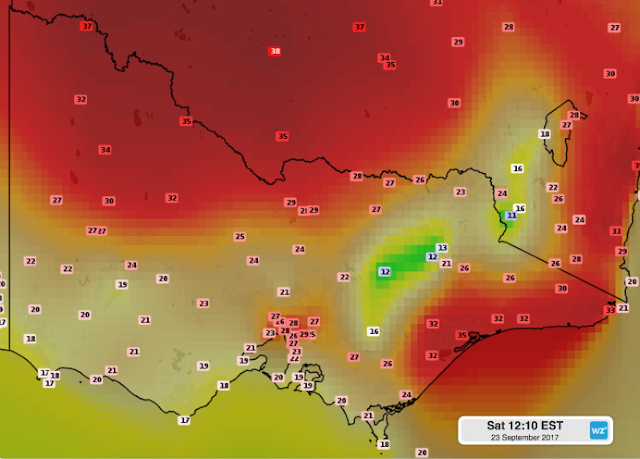 Mildura's 37.7°C yesterday ( Saturday ) was the highest temperature ever recorded in Victoria during September. 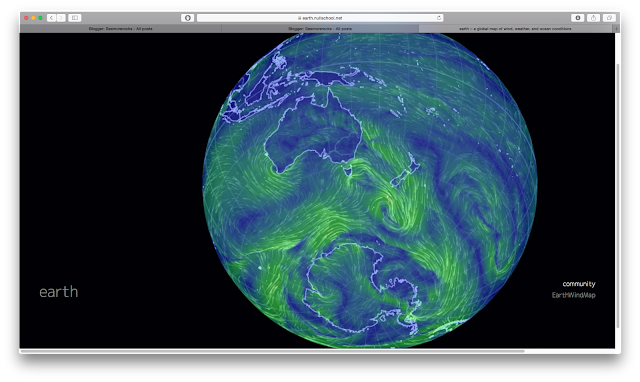 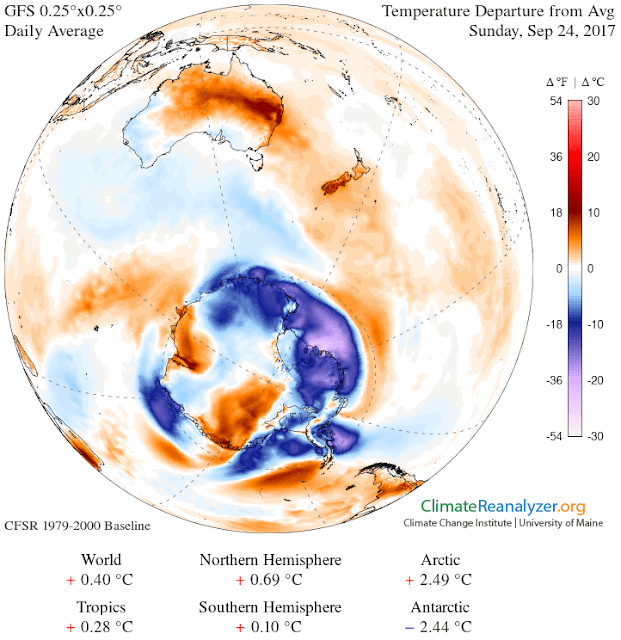 Meanwhile, across the Tasman

Severe gales, lightning, rain hit
High winds have toppled a truck and trailer and brought a tree down on a car in Canterbury, as stormy conditions hitting parts of the country bring severe gales, thousands of lightning strikes, heavy rain and high temperatures

Emergency services in Canterbury were called after a truck and trailer were overturned on Monday morning on Lewis Pass Rd, Island Hills, north of Christchurch. METSERVICE
Ten thousand lightning strikes were recorded in two hours on Monday morning.
A woman was taken to hospital in a moderate to serious condition after a tree fell on her car shortly before 7.30am on Weedons Ross Rd, in the Christchurch suburb of Selwyn.
Police warned motorists to drive to the conditions as high winds whipped the region.
Power authorities had been "very busy" on Monday morning with trees falling on power lines causing outages across South Canterbury, Fire and Emergency New Zealand Southern communications shift manager Andrew Norris said.

What's happening in #Dunedin? Temperature linked to wind, and both all over the place! ^TA 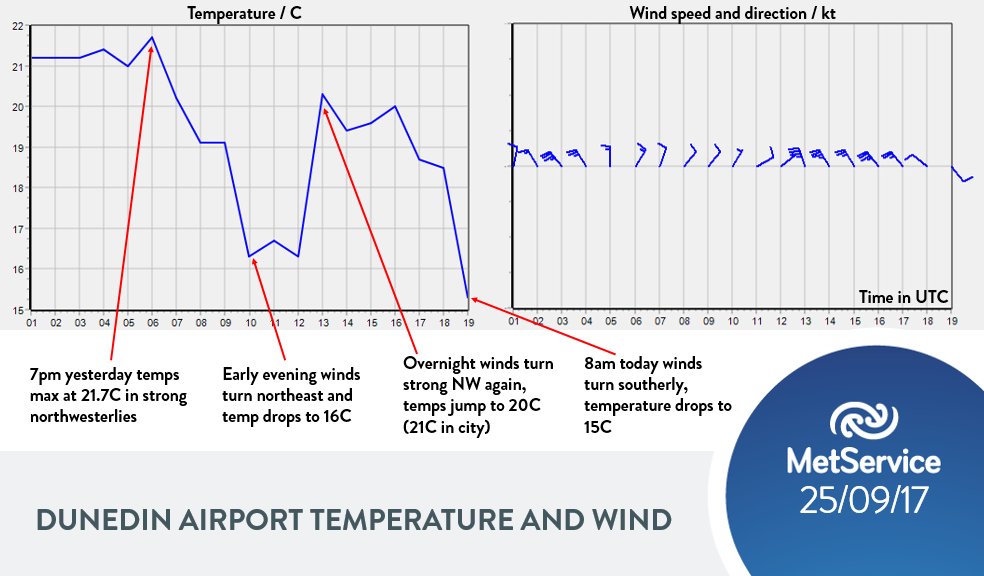 9:09 AM - 25 Sep 2017
Residents of Kimbell, Middle Valley, Mt Michael and Mt Dobson ski area were all without power as of 11am on Monday.
Power had been out since 5am and was expected to be restored by 12.30pm. 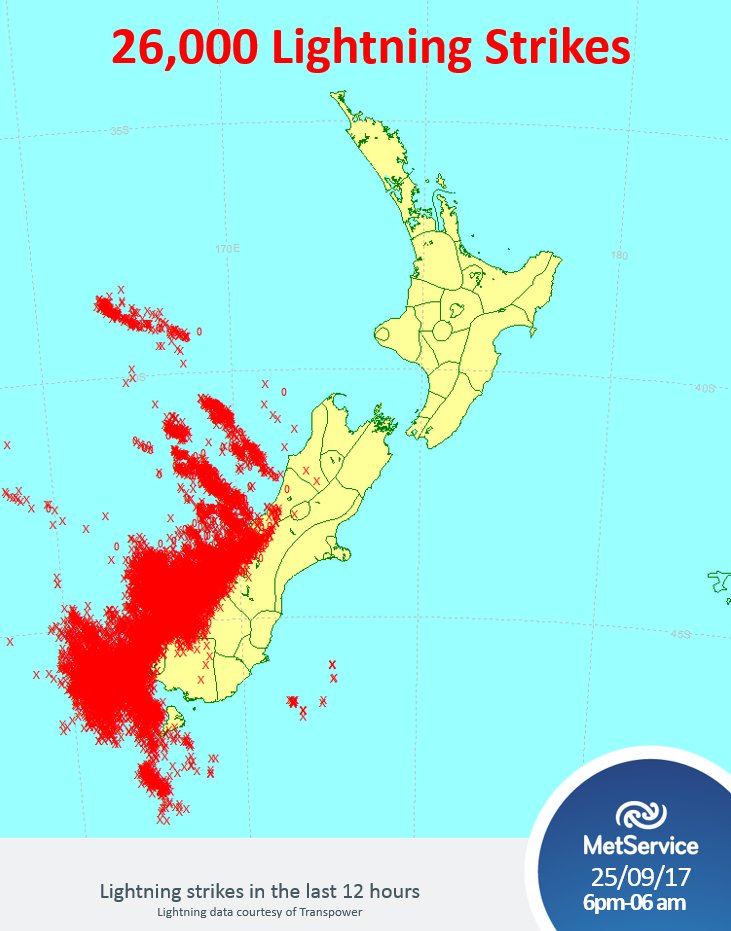 Thunderstorms across the west of the South Island sparked around 26,000 lightning strikes in 12 hours.
"We've got an active front moving up the country which has produced a lot of lightning overnight. 26,000 lightning strikes have been recorded so far in the 12 hours from 6pm yesterday to 6am this morning! A noisy night for some of you in the South Island," MetService said.
Lightning activity was expected to pick up again later in the day, MetService meteorologist Nick Zacher said.

STRONG WINDS: #SH2 Rimutaka Hill. Please #TakeExtraCare, especially if you are in a high-sided vehicle or on a motorcycle. ^EL 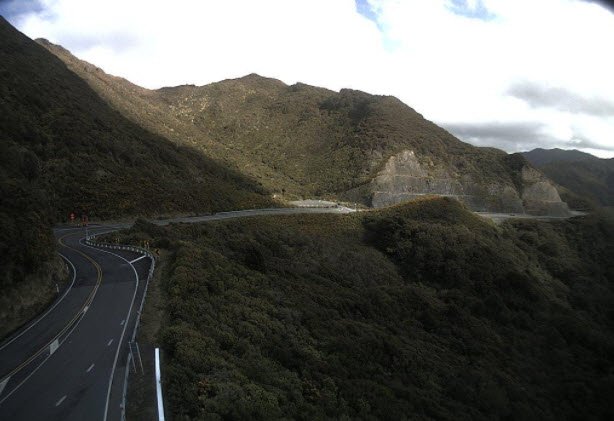 The stormy weather had seen the temperature in Dunedin at 20.2 degrees Celsius just before 7am – less than a degree off the city's forecast high of 21C for Monday – as warm unsettled conditions flowed across from Australia. This contrasted with Invercargill, further south, which recorded just 12.8C at the same time.
However the temperature dropped sharply to 15C after winds turned southerly at 8am on Monday.
MetService meteorologist Michael O'Connor said the warm overnight temperatures in much of the South Island east of the mountains were due to the fohn effect, where northwesterly winds dump moisture and gain warmth when passing over the Southern Alps.
When the temperature peaked in Dunedin about 1am, there had been a kind of tongue of warm air over the city.
About 7am, the warm air was working its way through Canterbury, O'Connor said. Christchurch had got to near 20C.
Stormy conditions were expected to continue in many areas throughout Monday and into Tuesday.
About 5am Monday, the heaviest rain recorded was 56mm over the past six hours in Milford Sound, Zacher said.
"Anywhere from Greymouth southwards through to Fiordland is going to see a good amount of rain throughout the next 48 hours," he said.
HIGH WINDS

By 5am, a wind gust of around 215kmh had been recorded at Mt Hutt, with 140kmh at Castlepoint.
The strongest wind recorded by MetService in Wellington overnight was a 108kmh gust in Kelburn at midnight, followed by a 99kmh gust at Mt Kaukau.
The northerly winds had eased off relatively on Monday morning but would pick up again on Monday evening and night, when gusts up to 130kmh were expected.
MetService had a strong wind warning in place for Wellington until Tuesday.
Some of the rain and thunderstorm activity was getting over the divide in the South Island. "I wouldn't be surprised to see some thunder and lightning and some heavy rain getting over the divide," Zacher said.
By 5am, the Otago headwaters and some areas to the south of Queenstown were getting some decent spillover.
The picture is different in the north of the country, with MetService predicting just cloudy periods for Northland, Auckland and Bay of Plenty on Monday.
For the west from Waikato to Taihape, it's expected to be cloudy with patchy drizzle turning to rain by tonight. In the southeast of the North Island, scattered rain is expected to develop in Wairarapa in the afternoon, spreading to Hawke's Bay by evening.
Severe gale northwesterlies are expected to continue in exposed parts of Wairarapa during Monday.
Wellington is forecast to have rain with severe gale northwesterlies, as are Nelson and Marlborough, although the severe gales are only expected in the Sounds.
From Canterbury to Southland it is expected to be dry on Monday, but the severe gale northwesterlies are only expected to ease gradually.
The temperature is expected to get to 20C in Auckland on Monday, as the morning cloud breaks, giving way to a fine day. It looks like the country's biggest city will get rain on Tuesday.
Wellington is forecast to get to 15C on Monday, with northwesterlies gusting to 120kmh in exposed places and rain. Conditions are expected to be similar on Tuesday, although improving later in the day.
The NZ Transport Agency is warning of strong winds on State Highway 2 over the Rimutaka Range, north of Wellington.
Christchurch could have a few spots of rain, with strong northwesterlies and a high of 23C. Napier is forecast to get to 25C with a fine day, although showers are possible from evening, and northwesterlies will strengthen.
- Stuff

Hang on to your brolly, the big wet is set to continue 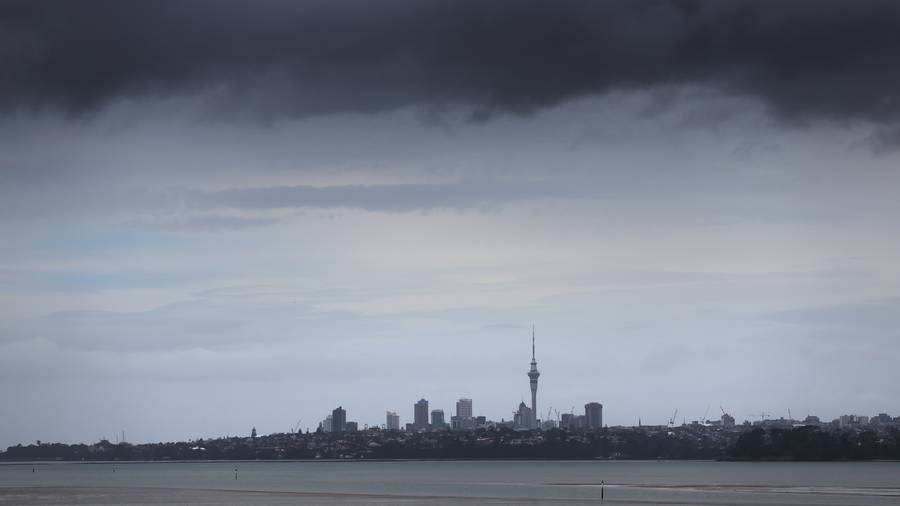 It's only September but more rain has fallen in three of the country's main centres than normally does in an entire year.

MetService meteorologist Georgina Griffiths said given there was another week of wet weather on the way, even more places would exceed their annual norm by the beginning of October.

That's bad news for Kiwis who were hoping the start of daylight saving today would herald the arrival of an extra hour's sunshine for over the next few weeks.

While much of the country was expected to enjoy the remnants of a heatwave heading our way from across the Tasman over the next couple of days, the big wet is expected to return soon after.

Blustery night in Wellington but worse to come 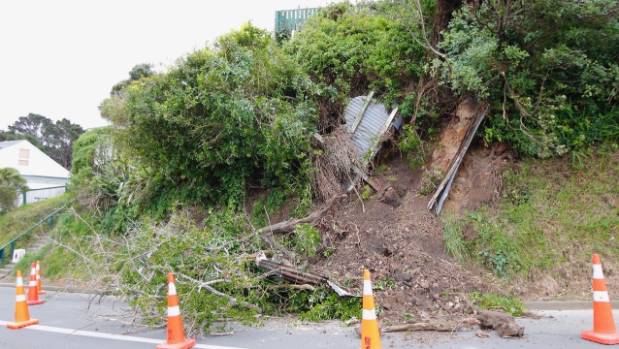 After a relative lull in the wind on Monday morning, MetService is warning the worst of the wind is still to come.

Police said a tree had blown over and was blocking a lane of Manchester St, behind Wellington Zoo, on Monday morning.

The strongest wind recorded by MetService in Wellington overnight was a 108kmh gust in Kelburn at midnight, followed by a 99kmh gust at Mt Kaukau

1 hr ·
Where is this warm, wet and windy weather coming from?
Warm air over Australia has picked up a lot of moisture as it crosses the Tasman Sea, and is bringing that humid air to New Zealand. That means heavy rain in the west, with rain warnings issued from Taranaki to the West Coast, and northwesterly gales for central parts. Seehttp://bit.ly/AllWarnings
for more info.

Humid northwesterlies also mean foehn heating in the east, caused by the air rising over the mountains (see https://www.youtube.com/watch?v=-Zshykr5NFQ). Fairlie hit 23.5C at 5am, nearly 3 degrees warmer than Niue airport at the same time. Other places were more fickle, with the northwesterlies cutting in and out, leading to rising and falling temperatures. But the nor'wester is more likely to reach the ground during the day, and today's highs are expected to reach 25C in Napier and 24C in Christchurch. ^TA

Posted by seemorerocks at 13:01