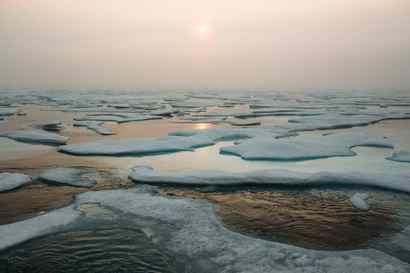 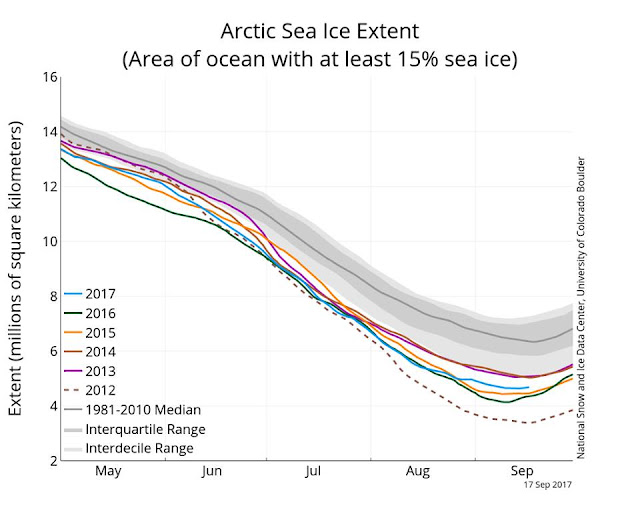 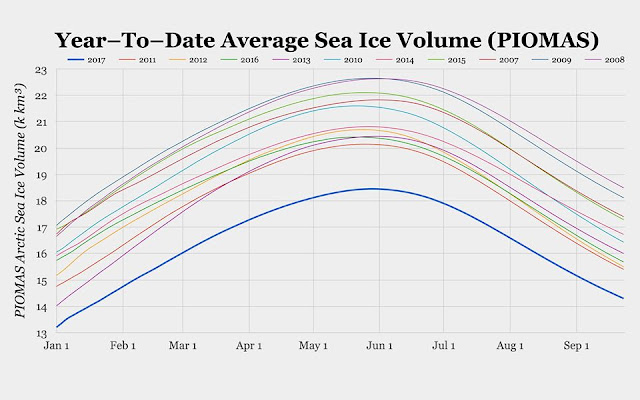 You be the judge: «On September 13, Arctic sea ice appears to have reached its seasonal minimum extent of 4.64 million square kilometers, the eighth lowest in the 38-year satellite record.» US NSIDC

NSIDC has the worst resolution on Earth for their sea ice products, and accordingly they clock the extent at 8th lowest for the minimum this September.
JAXA has better resolution and they say 6th lowest at minimum.

And then there’s volume, generally agreed to be the best measure for our declining ice–cap. How’s Arctic sea ice volume doing in 2017, according to PIOMAS? Umm, er, it appears to be record low, or at least lowest in satellite record (since 1979).

Try tell that to the Mainstream Media! 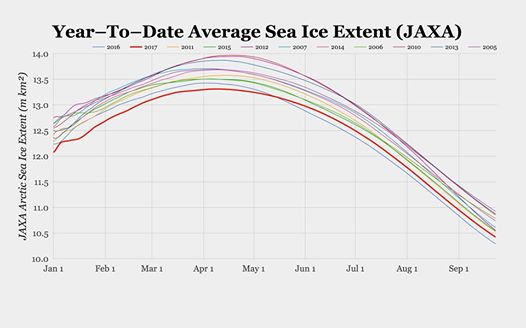 Meanwhile Zero Hedge are serving up this nonsense. What do they know about science?! 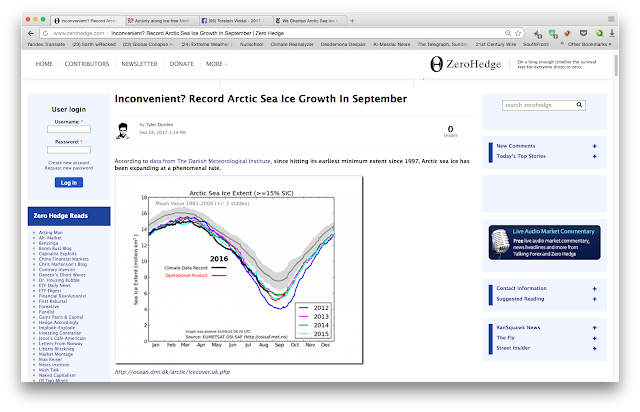 "Bottom melt is also still going on, and due to so much open water in the CAB and general Arctic Ocean, waves, vapour & cyclones are having a go at remaining ice. Wind could also set the ice in motion, and we could see ice going south for many months still before spring melt." 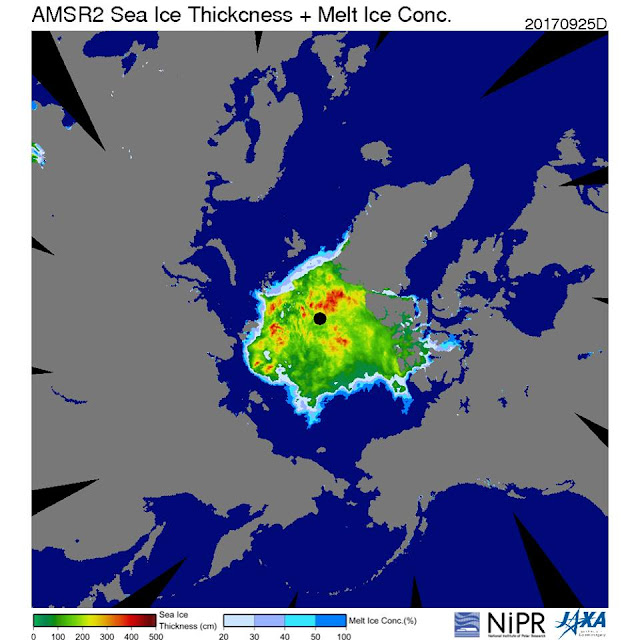 Comments on the 207 ice minimum

«With all due respect, I may have misread you, but I think you are looking at it in a very black and white way: Ie. "Is it at the lowest, or is it not?", as are many people on the internet today.

I'm sorry, but that is just a very primitive way to think about the Arctic.

First off, to me (and I think this is what Wadhams thinks too based on e-mails and knowing how old Oxford boffins from a bygone era, tend to talk), is that a "Blue Ocean Event" doesn't really mean a full blown open ocean like the Mediterranean or something. It means a ton of icebergs floating around all over the place, with enough room to sail ships through them in most places, and a load of ice clinging to land masses.

ie. Icebergs everywhere, but no discernible (or very small) "ice-pack". Huge portions of the Arctic Ocean were getting close to that this year.

The Arctic Ocean itself is close to, or at, the worst shape (volume) on record, apart from thick ice crushed against land-masses. And this is the answer you should give to climate-science deniers who are all over the Net now, braying about how the "Arctic is growing".

North Atlantic waters seeping into the Arctic are warmer than ever, the Nares was open all year since last year, the SSTs all around are warmer, the overall Arctic Ocean volume (ignoring thick ice crushed against land) is close to the worst state on record at start of freezing season, if not the worst, the ice itself is said to be poor quality, the fire seasons are pouring more soot over the Arctic than ever, and the fire seasons are longer than before, the seabeds are thawing, the tundra is warming.

I try really hard to see the good news, and the idea that 'we dodged a bullet' being floated all over the internet now. I don't see it. “Extent” is not telling the true state the overall Arctic Ocean.

These general extent graphs are deceptive. I do think volume is the most important factor, and that volume in the overall Arctic Ocean to be the most important indicator. There could be more snow in winter, but that's about it (which is what climate-scientists predicted for decades now).

But wait for the science-deniers across the right-wing news to start shouting that ""the Arctic ice is in the best shape in years, and getting better.""

I am very concerned that ice-aficionados are going to let the climate-science-deniers get away with it, because these ice-observers themselves are saying "things are not that bad, because extent (of sea-ice in the N. Hemisphere) is better than expected". I think it's dangerous, and neglectful.» 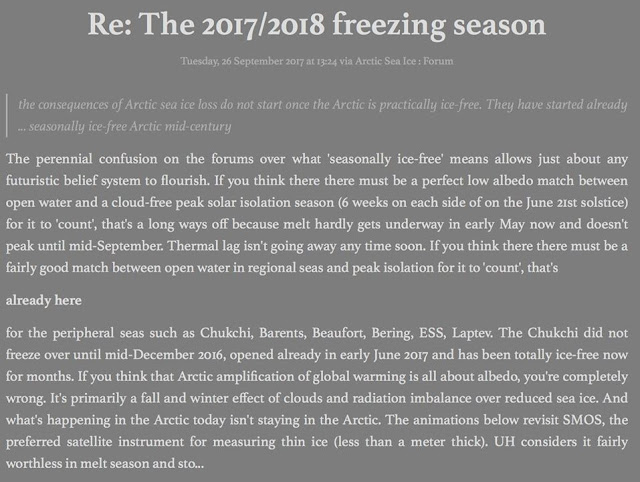 «The Chukchi did not freeze over until mid-December 2016, opened already in early June 2017 and has been totally ice-free now for months. If you think that Arctic amplification of global warming is all about albedo, you're completely wrong. It's primarily a fall and winter effect of clouds and radiation imbalance over reduced sea ice. And what's happening in the Arctic today isn't staying in the Arctic.» 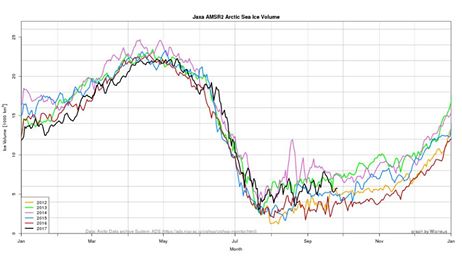 « Reply #119 on: September 27, 2017, 10:32:04 AM »
Cold anomalies in Siberia and the Laptev sea cools quickly. I was expecting slow freeze up of the Laptev but now it looks it will freeze like in previus years. Chuckchi and ESS still look terrible, that may lead to low November SIE but e'll see 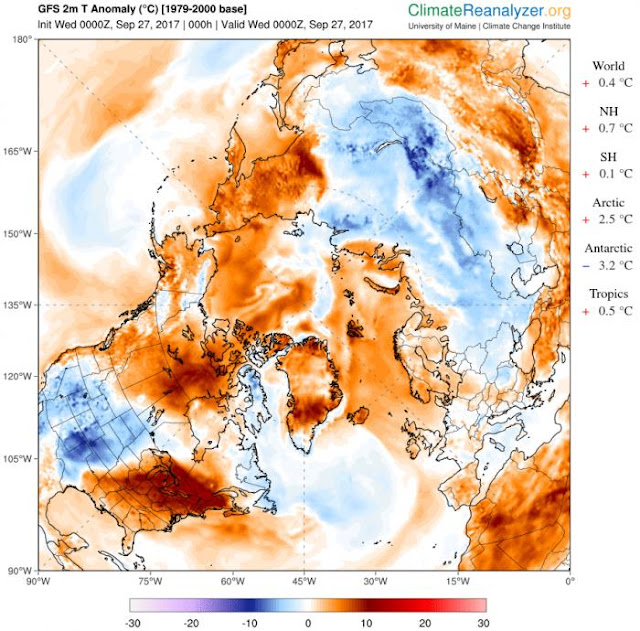 Posted by seemorerocks at 13:40