Just a few days ago I got to respond to an interview with Prof. James Renwick on Guy McPherson’s visit, Denial from climate scientists.

Guy McPherson I met him at today's presentation

Guy McPherson No fireworks. He admitted his ignorance about climate change. But only one-on-one, not publicly.

It is quite something to admit the limits of one's knowledge in private and then, the next day to write an attack the next day.

Prof. Renwick may have been involved in writing the latest IPCC reports but nothing he has said has forced me to alter my impression (confirmed above) that his knowledge is somewhat sketchy outside of his area of expertise, which is atmospherics although he seems to have got some aspects of that wrong.

Unfortumately for many just having this "expert'" preaching steady-as-you-go will be enought persuade some people.

The following is a brief discussion I had with Guy on Prof. Renwick's piece (below).

I apologise for the quality of the recording

Guy McPherson and the end of humanity (not)
Is climate change going to wipe out humanity over the next 10 years? Prof Jim Renwick doesn’t think so…

Ecologist Guy McPherson has been touring New Zealand for the past couple of weeks, explaining why humanity has only 10 years to live (a kind-of Ziggy message that has immediate appeal to me). After hisappearance on the Paul Henry breakfast show, I was called by TV3/Newshub for comment. Based on my understanding of climate change science I said that though the situation is very serious — dire even — extinction in 10 years is not going to happen. When I gave my remarks to Newshub, I knew little about McPherson but I understood that he is a very knowledgeable biologist who should not be dismissed lightly.

So, what’s the story? Is McPherson right? Is the IPCC woefully conservative and keeping the truth from us all? I had the opportunity to hear Prof McPherson speak in Paraparaumu on Saturday (Dec 10th) to get more insight into what his views really are. It was a very interesting presentation, and a very interesting discussion with the audience of 50-odd Kāpiti coasters who showed up to hear him. As the old saying goes, extraordinary claims require extraordinary evidence. What we heard was extraordinary for sure, but was not too convincing in terms of evidence.
McPherson’s presentation was as much philosophy as science. Much of his message is built around the undeniable truth that we are all, one day, going to die.

Hence, we would do well to live in and for the present, express our love to those close to us, and act rightly according to our own beliefs and principles. Excellent advice, and a great philosophy for living well, what you would be told in any number of “life-coaching” books. Where he differs from most is in saying that all of us, i.e. all of humanity, and most other species, will be extinct in 10 years or so. Why is that, you might ask?

The detail on his view of the climate system can be gained by reading his “monster climate change essay”. A briefer overview, and what he bases much of the scientific side of his presentation on, comes from a blog post at the Arctic-News blogspot site,  written by “Sam Carana” (not his or her real name – you know why). This piece suggests that the globe will warm around 10°C in the next decade, and since such warming was associated with mass extinctions in past epochs, humanity and most vertebrates etc will be toast very soon.

The blog post starts by assuming the February 2016 global mean temperature represents the current average temperature of the earth, then throws in another 0.8°C for pre-1900 (0.3°C) and unavoidable future (0.5°C) warming. This is pushing it, as February was the warmest single month on record (in difference from normal terms), several tenths of a degree above the annual mean for 2016, and the amount of unavoidable future warming is small (maybe 0.1°C?), should greenhouse gas emissions stop now.

However, the next steps are where McPherson’s grasp of the science seems shakiest. Cutting aerosol pollution to zero (as would happen when and if industrial society falls over) will unmask another 2.5°C of warming. This is a factor of ten too large, as the actual amount would be around 0.25°C by current best estimates (see figure 10.5). Reduced planetary reflectivity (albedo) from loss of Arctic ice will add another 1.6°C (perhaps in the Arctic, but not in the global mean), plus the water vapour feedback, seafloor methane release etc will add an extra 3.5°C. So that’s another 7.5°C on top of essentially where we are at now, giving a total of about 10°C warming compared to pre-industrial, assumed to happen in the next 10 years. Then, all the world’s nuclear reactors melt down, and we are all extinct.

Water vapour is of course a critically important part of the climate change story and is the main amplifying feedback of greenhouse gas increase. McPherson is trained as an ecologist, so it’s no surprise that he isn’t totally on top of the vertical profile of water vapour in the atmosphere. But, if your public profile depends on your image as an authority on “global warming”, you would do well to be clear on the science.

Now, the potential consequences of climate change, and the lurking feedbacks such as Arctic methane release and other carbon cycle changes, are an extremely serious concern, one that I think the governments of the world have yet to really take on board. The risks of severe food and water shortages, population displacements and conflict over resources, already has the potential to endanger hundreds of millions of lives – even with another degree or two of warming (as outlined in the last IPCC report). But truly catastrophic and extremely rapid climate changes do not look to be on the cards, at all. Earth’s climate is not poised for “runaway” change (as per Venus), nor is there any clear indication from the geological record that the climate system is so sensitive to greenhouse gas increase that 10°C of warming in 10 years is imminent, or even possible. The climate community of course does not know everything about past climate change nor about what the climate system is capable of if pushed hard. But, the extinction in 10 years scenario is really at the outer edge of speculation about the future.

Even without imminent extinction, the consequences of climate change are more than dire enough to galvanise us into action. My perception is that concerted global action within the next decade can avoid the worst consequences. The flip side is that business as usual, even for another ten years, could lock in changes that do indeed put global society at risk and threaten possibly hundreds of millions to billions of lives. Not instant death but a very unpleasant future for a very long time. I find that prospect plenty scary enough, and it leaves room for us to take action. Let’s take it.

Gareth adds: McPherson’s views are a good example of real climate “alarmism”. Deniers love to paint the IPCC or consensus position on climate change as alarmist, thereby implying that their rejection of that consensus is somehow sensible or moderate. McPherson’s stance shows that to be a mere debating trick. The truth, of course, is that by rejecting the consensus view on what we can expect, deniers are as extreme as McPherson — polar opposites, but just as guilty of exaggeration

Author: James Renwick
I am a climate researcher with a background in atmospheric dynamics and statistics. I was involved in writing the 4th and 5th Assessment Reports for the IPCC and am also on the joint scientific committee of the World Climate Research Programme (WCRP)

I am not personally in a position to debate with the esteemed professor but after reading  his comments about water vapor in the upper troposphere I suspect he might find himself in conflict with the following. 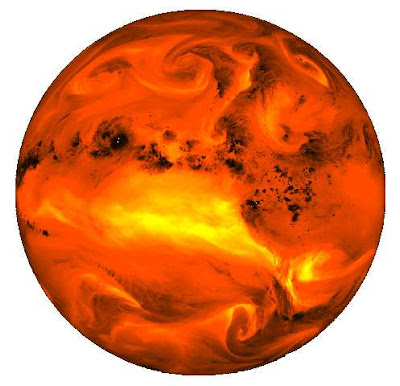 A new study from scientists at the University of Miami Rosenstiel School of Marine and Atmospheric Science and colleagues confirms rising levels of water vapor in the upper troposphere – a key amplifier of global warming – will intensify climate change impacts over the next decades. The new study is the first to show that increased water vapor concentrations in the atmosphere are a direct result of human activities.

"The study is the first to confirm that human activities have increased water vapor in the upper troposphere," said Brian Soden, professor of atmospheric sciences at the UM Rosenstiel School and co-author of the study.

He will also find himself in conflict with his colleague, emeritus professor Peter Barrett who, back in 2004, was forced to recant his contention that global warming will result in extinction because of the objections of people like Renwick.

The winner of one of New Zealand's top science medals, Professor Peter Barrett, has backed off a controversial claim that humanity faces extinction within 100 years because of global warming.

Dr Barrett, who was presented with the Royal Society's Marsden Medal in Christchurch last night, gave the Christchurch Press notes for his acceptance speech in which he planned to say: "If we continue our present growth path we are facing extinction - not in millions of years, or even millennia, but by the end of this century."

After a storm of criticism, he changed the word "extinction" in his speech last night to "the end of civilisation as we know it".


Here is an earlier piece about James Renwick with a video which illustrates his views.

The steady-as-you go approach of Prof Renwick is nonsensical and the IPCC computer modelling he is evidently wedded to has been shown to be completely inaccurate by actual observations.