US denies involvement in assassination of Russian envoy to Turkey

‘Ludicrous claim’: US denies involvement in assassination of Russian envoy to Turkey

The US roundly denied accusations of being involved in the killing of Russian Ambassador to Turkey Andrey Karlov, as Ankara links the chilling attack to Fethullah Gulen, a self-exiled Turkish cleric residing in Pennsylvania with Washington’s approval.

“It’s a ludicrous claim, absolutely false, there’s no basis of truth in it whatsoever,” US State Department spokesman John Kirby told reporters during a daily press briefing on Tuesday.

Just hours after Ambassador Karlov was shot dead in Ankara, top Turkish officials claimed the trail of the shocking attack leads to the US.

“Any notion that the United States was in any way supportive of this or behind this or even indirectly involved is absolutely ridiculous,” Kirby added.

During a telephone conversation on Tuesday, Turkish Foreign Minister Mevlut Cavusoglu told US Secretary of State John Kerry that “both Turkey and Russia know the Gulenist Terror Cult (FETO) was behind Russian envoy Karlov’s assassination,” according to Daily Sabah.

Fethullah Gulen, the 74-year-old cleric, was a popular preacher and former imam before starting his own movement. He was a staunch ally of Erdogan when the Turkish leader was rising to power, but the two fell out and have become bitter rivals.

Ankara claims that Gulen created a “parallel state” in Turkey in the form of a network of supporters among Turkish officials, and accuses him of masterminding the failed military coup in July.

Commenting on the issue, Kirby said that Secretary Kerry “did raise his concerns about some of the rhetoric coming out of Turkey with respect to American involvement / support, tacit or otherwise, for this unspeakable assassination yesterday because of the presence of Mr. Gulen here in the United States.”

Ambassador Karlov was attacked at an art exhibition in Ankara by an armed man said to be an off-duty Turkish police officer, Mevlut Altintas. The diplomat was several minutes into his opening speech when Altintas pulled out a gun, shouted “Allahu Akbar,” and fired multiple shots.

The man then shouted in Turkish: “Don’t forget Aleppo! Don’t forget Syria! Only death can take me from here. Everyone who is involved in this suffering will pay a price.” Before he was killed by Turkish Special Forces, he also yelled in Arabic: “We are the one who pledged allegiance to Muhammad, to wage jihad.”

Thirteen people in Turkey, including Altintas’ parents, sister, and two other relatives were detained in the western province of Aydin, as was his roommate in Ankara, Daily Sabah reported. Additional arrests were also carried out in Ankara province, according to NTV.

Ambassador Karlov’s body was flown back to Moscow on Tuesday evening after receiving military honors in Turkey. Russian secret services have launched an investigation into the killing.

In his time as ambassador, Karlov led his diplomatic mission through a troubled period in Russian-Turkish relations. He also served as Russian ambassador to North Korea. Russian officials, as well as foreign counterparts, describe him as an intelligent and extremely knowledgeable professional.

Al-Nusra’s hand in Ambassador’s murder spells trouble for US
Al-Nusra has been supported by Turkey, the US, Saudi Arabia and Qatar. If they are in fact responsible for the killing, the blame lies with the terrorist group's benefactors and supporters. 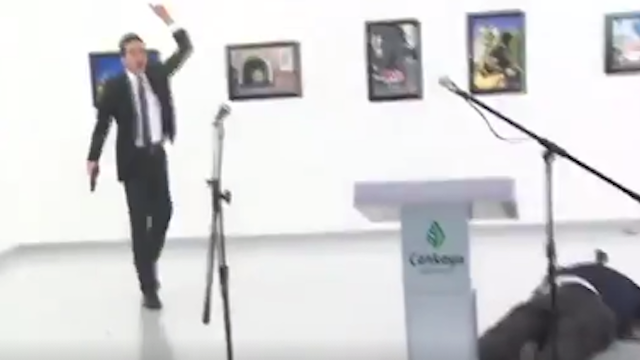 From the moment His Excellency Andrey Karlov was assassinated in Ankara, many people started pinning the blame on Western hands. Some said it was a CIA plot, while those close to President Erdogan continue to blame Fethullah Gülen who is exiled in the United States. The assassin trained to be a policeman in Izmir, a hotbed for Gülen supporters. This could be incidental but cannot be ignored.

Today, however, Al-Nusra, the Al-Qaeda branch of terrorists who had occupied much of East Aleppo until its recent liberation, have now claimed responsibility for the attack. Terrorist organisations frequently claim responsibility for acts they wish they had committed in addition to those which they actually execute. This could be the case with Al-Nusra, but if the statement is true, the implications are far reaching.

Since the Battle of Aleppo commenced, the US State Department employed every deceptive trick in the book in order to shelter Al-Nusra from violence. Up until the victory for Syria in the Battle of Aleppo, the US pinned its hopes of regime change on an Al-Nusra victory. Al-Nusra is deeply tied into the chain of terror funded by Saudi and Qatari money, often laundered by the Turkish deep state.

All of this means that if the assassin was an agent of Al-Nusra, by extrapolation he was an agent of elements of the regimes in the US, Turkey, Saudi Arabia and Qatar, the same states which have been working to undermine the sovereignty of Syria and the strength of its legal government. All of the sudden the conspiracy theory about a western hand turns to fact.

Erdogan is something of a gambler, he needs Russian cooperation in business yet tries to work against the interests of Russia internationally whenever able. This has been especially true in Syria. However, Erdogan owes his life to Russia in many ways. It was Russia who tipped Erdogan off about the July coup attempt. This allowed him to flea and make an appeal to his supporters to resist the coup. Had Russia not done this, there could have been regime change in Ankara.

Furthermore, Russia was the first foreign power to condemn the coup whilst America remained comfortably mum. The sword of Damocles which for so long hung over Erdogan’s head is now brushing against his throat. The need for Turkey to cooperate with Russia for pragmatic reasons has transformed into a need for cooperation based on self-preservation.

Russia has already been far too tolerant of Turkey’s illegal and counterproductive role in Syria. Hopefully the trilateral peace talks between Russia, Iran and Turkey will change this trajectory. Erdogan cannot afford any more trouble. His cooperation with Russia over the investigation into the assassination does give one hope that the mad Sultan may realise that like a cat, he has a finite number of political lives.

If the assassin was indeed an agent of Al-Nusra, the blame for the killing is in fact shared by all of Al-Nusra’s benefactors and big league supporters. The investigation will hopefully bring more facts on this matter to light.