This has hit hard. I have been aware of the Red Army Choir since my mid-teens and have always enjoyed their perfornances.

The tragic loss of the Alexandrov Choir (VIDEO) 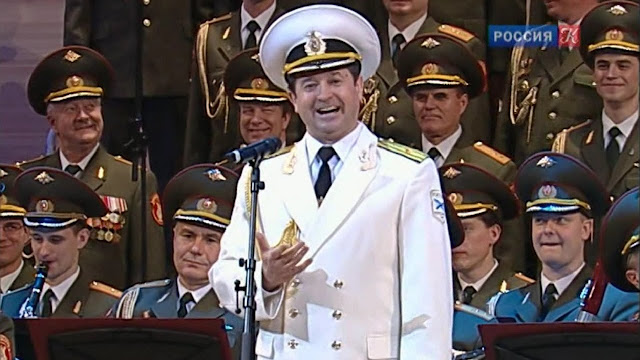 All but three members of Russia's most beloved vocal ensemble have died in the tragic plane crash.
Today’s news of the Tupolev-154 crash is personally devastating. Of the 92 souls on board, the vast majority were members of the Alexandrov Choir, colloquially known  as the Red Army Choir. The rest were civilian journalists and charity workers, including Elizaveta Glinka who has worked tirelessly to help the children of Donbass whilst the west lets them starve.

The Alexandrov Choir were en route to Syria to perform for the troops and civilians as they have done in every major conflict abroad since Alexander Alexandov formed the ensemble in 1926. The choir’s music helped comfort civilians and entertain soldiers during The Great Patriotic War. They provided the soundtrack for the most harrowing years in all of Russian history. Many of the most beloved songs composed during the war were by Alexander Alexandrov, including my personal favourite The Sacred War.

Perhaps most enduring was Alexandrov’s composition of the Soviet Anthem whose music is used as the current anthem of the Russian Federation. Few people in the world have not heard the basses, baritones and tenors of the choir. The signature sound was unlike anything in the world. The instrumentalists of the ensemble were equally talented playing a mixture of orchestral instruments, folk instruments and modern pop instruments.

In the 1990s, the fate of the ensemble remained uncertain, especially after the death of Boris Alexandrov in 1994, who had directed the ensemble since his father’s death in 1946 up to his official retirement in 1987. However, a Finnish punk rock band called The Leningrad Cowboys revived the economic fortunes of the ensemble by performing with the Alexandrov Choir throughout the world. At first such moves proved controversial. The Alexandrov Choir is quite sacred to most Russians and the idea they’d lower themselves to play with comic rockers was peculiar to say the least. But this was Russia in the 1990s and all artists were forced to take whatever opportunity arose to earn their living.

Under President Putin, the prestige of the choir was restored to that of its Soviet glory and the music remains as popular as ever in Russia and the wider world. Today’s loss is a colossal blow for Russian culture. The choir will continue, it will have to be re-built from the ground up, but the voices silenced in the plane crash will continue to haunt many.

May God rest the souls of all those lost in this terrible tragedy.

Renowned Russian humanitarian and charity activist Elizaveta Glinka, widely known as Dr. Liza, is feared dead after boarding the plane bound for Syria that crashed Sunday morning off the Sochi coast.
The 54-year-old head of the 'Fair Help' fund was supposed to travel to Latakia to deliver medical supplies to a hospital, according to the Human Rights Council.

Her fund also said that Glinka was “taking humanitarian supplies for the Tishreen university hospital in Latakia,” while the Defense Ministry confirmed the passenger list included her name....

'My boy, my love, my life': Last photographs of Tu-154 crash victims emerge on social media

Relatives and loved ones of those who were on board the fatal Russian flight en route to Syria shared their memories of those who died in the Sochi plane crash on Sunday.

A woman named Yulia Galkina posted a photograph of a man on board a plane on Russian social network VKontakte, and wrote, "my boy... my love... my life... you are the best on Earth!!! I've always told you this ..rest in peace!!"

The man with his thumb up was Aleksandr Shtuko, who performed in the choir of the Alexandrov Ensemble. He was one of the 64 members of the internationally-acclaimed Russian army band, who had been traveling to Syria to give a festive concert during winter holiday celebrations.