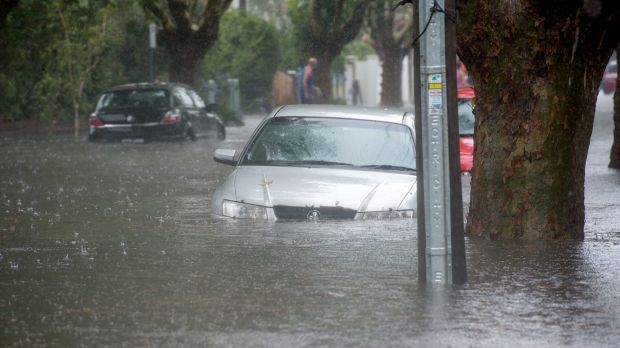 Hundreds of homes across Melbourne have been damaged by severe thunderstorms, many suffering partial ceiling collapses after guttering and downpipes couldn't cope with the intense rain.

Property owners used brooms, mops and towels to combat the water, which damaged carpet and other floor coverings. 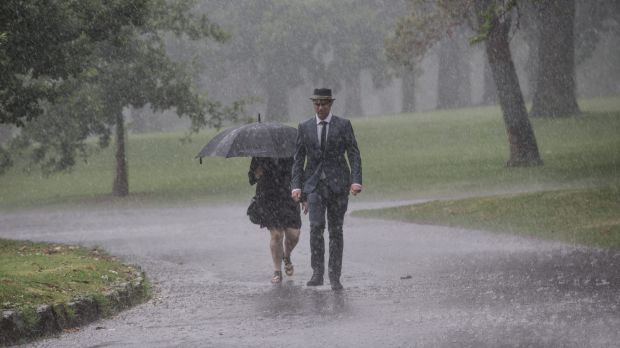 By 7pm Thursday the thunderstorms had already generated about 1400 requests for assistance to the SES. More were expected after people assessed their homes.

SES state duty officer Andrew Murton said there were "hundreds of trees down" after the storms, and hundreds of calls about "building damage" as well. 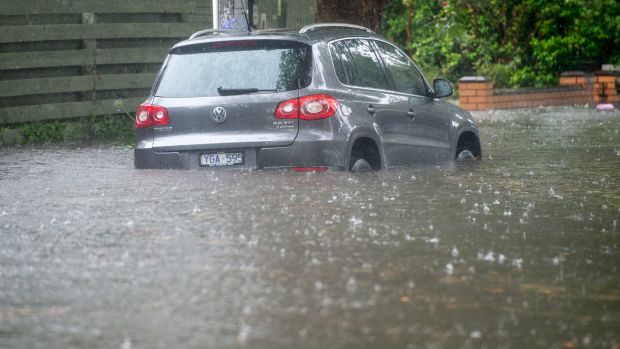 Many of the calls about building damage related to partial ceiling damage "as a result of water coming into homes," he said.

"We've seen intense rain rates of up to one millimetre a minute with some of these storms that have come through, according to the bureau. So that's significant rainfall in a short amount of time," Mr Murton said.

"Since about 2 o'clock this afternoon we've had a number of severe thunderstorms come through, with damaging winds and particularly heavy rain.

"It's the rain that's caused most of the issues for metropolitan Melbourne. We've had a number of calls for assistance for flooding, building damage, water inundation into homes, those sorts of things," he said.

In Elwood, residents were forced to wade along footpaths in water that was knee-deep, and water inundated verandahs and at least one home in the suburb.

One Elwood resident told Channel Nine that "at the worst of it, we had four inches of water through the entire house".

He also said: "It was like a river coming up the side of the house, filling the backyard, coming up under the door, under all the doors ... under the floor, through the floor, under the skirting boards, everything, everything. It just came in every angle. You just couldn't get towels down quick enough."

Viewbank, in Melbourne's north, was the wettest suburb by early Thursday evening. It had received 79.4 millimetres of rain by 7.30pm, followed by Scoresby (60 millimetres) and Melbourne Airport (54.2 millimetres).

Suburbs in Melbourne's inner-south, such as South Melbourne and Elwood, also copped a drenching, and drains struggled with the mass of water.

While in Melbourne's north the multi-lane Western Ring Road resembled a creek, and was closed in both directions in Bundoora by VicRoads before 6pm.

At 7.50pm a VicRoads statement said: "The Western Ring Road remains closed in both directions near Plenty Road, due to extensive flooding from the Darebin Creek. This closure will be in place until the water subsides. Traffic caught within the closure is being guided through by Victoria Police."

VicRoads also warned that there were "flooded roads across the network. Do not drive through flood waters. The water is deeper than you think, moving faster than you think and there may be snags under the surface. VicRoads advises motorists to delay travel tonight, if possible. We have already had a number of vehicles stuck in flood waters tonight."

On the southern side of Melbourne the torrential downpour tested the drainage system of the Alfred Hospital.

"Melbourne's heavy rain caused a drainage pipe to burst at The Alfred causing a number of water leaks across the site this afternoon – including some adjacent to the hospital's main operating suites," said a spokesman.

"As a precaution, all surgical cases were temporarily relocated to our operating suites commonly reserved for elective surgery. Some ceiling damage and water leaks in non-patient areas also occurred," he said.

"No patients or staff have been adversely affected by the wild weather, and site inspection and clean-up continues," the spokesman said.

Geoffrey Love, secretary of the Elwood Floods Action Group, said the flooding that hit Elwood had caused "significant" damage in the suburb.

Mr Love urged the four councils that were home to the Elster Creek catchment, Melbourne Water and the state government to work cooperatively to reduce the risk of flooding in Elwood. The Elster Creek flows into the Elwood Canal.

He called for consistent council policies that would help reduce the amount of stormwater run-off, the use of permeable surfaces instead of hard surfaces and the construction of levees to catch and contain floodwater.

Mr Love said Elsternwick Park should be modified so that it could retain water when flooding occurred. He called for the park to be "contoured and designed" to help manage floodwater, the construction of a levee bank around Oval Two, and for a small wetland in the park to be "significantly expanded".

A severe weather warning remains in place for heavy rain that could lead to more flash flooding in Melbourne on Thursday night.

Warnings remain in place for the districts of Northern Country, North Central, North East, West and South Gippsland and parts of the East Gippsland district.

Locations which may be affected include Bendigo, Shepparton, Seymour, Geelong, Melbourne, Wodonga, Wangaratta, Traralgon and Bairnsdale.