IT BEGINS: Buchanan Calls for Heads to Roll at CIA and NED, Investigations of 'Saboteurs 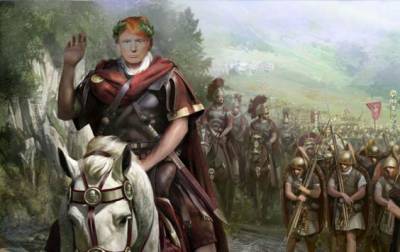 Russia Insider,
21 December, 2016
In an extraordinary and blistering article yesterday, Pat Buchanan argues that the 'War Party' i.e., the neocons, are trying to 'dynamite detente with Russia' before Trump can even start it.
He basically calls on Trump to get medieval on these morons, and start knocking heads.
He calls for hauling the CIA and NED Directors and their deputies in front of Congress to investigate their role in the Russia Hack stunt, their efforts to delegitimize Trump after he won the elections, the anti-Putin demonstrations in Moscow 2011, fomenting the Ukraine crisis, and the 'color revolutions' around Russia's borders.
He says Trump should purge the CIA of the neocons who pulled the Russia Hack stunt, and even calls for making them take lie-detector tests about leaking to the anti-Trump media.


The whole thing is a great read, but here are some choice paragraphs:

If the War Party can convert this “fake story” into the real story of 2016, then they can scuttle any Trump effort to attain the rapprochement with Russia that Trump promised to try to achieve.

If they can stigmatize Trump as “Putin’s president” and Putin as America’s implacable enemy, then the Russophobes are back in business.

Nor is the War Party disguising its goal.


The War Party is out to dynamite any detente with Russia before it begins.


Clinton says Putin has had it in for her because he believes she was behind the anti-Putin demonstrations in Moscow in 2011.

But if there is to be an investigation of clandestine interference in the politics and elections of foreign nations, let’s get it all out onto the table.

The CIA director and his deputies should be made to testify under oath, not only as to what they know about Russia’s role in the WikiLeaks email dumps but also about who inside the agency is behind the leaks to The Washington Post designed to put a cloud over the Trump presidency before it begins.

Agents and operatives of the CIA should be subjected to lie detector tests to learn who is leaking to the anti-Trump press.

Before any congressional investigation, President-elect Trump should call in his new director of the CIA, Rep. Mike Pompeo, and tell him to run down and remove, for criminal misconduct, any CIA agents or operatives leaking secrets to discredit his election.

The top officials of the CIA and Carl Gershman, president of the National Endowment for Democracy, should be called to testify under oath. Were they behind anti-Putin demonstrations during the Russian elections of 2011?

Did the CIA or NED have a role in the “color-coded” revolutions to dump over pro-Russian governments in Moscow’s “near abroad”?

What role did the CIA, the NED and John McCain play in the overthrow of the democratically elected government of Ukraine in 2014? McCain was seen cheering on the crowds in Independence Square in Kiev.

The real saboteurs of his new foreign policy may not be inside the Ring Road in Moscow; rather, they may be inside the Beltway around D.C.