The pot is calling the kettle black methinks

Erdogan Says He Has "Confirmed Evidence" The US Supports ISIS

One year after this website demonstrated that Turkey was cooperating with the Islamic State, in the very least trading cash in exchange for crude oil sold to various Turkish outposts (a trade which was subsequently ended by the Russian air force), Turkey has flipped the tables and on Tuesday Turkish President Recep Tayyip Erdogan said he has uncovered evidence that US-led coalition forces have helped support terrorists in Syria - including Isis. 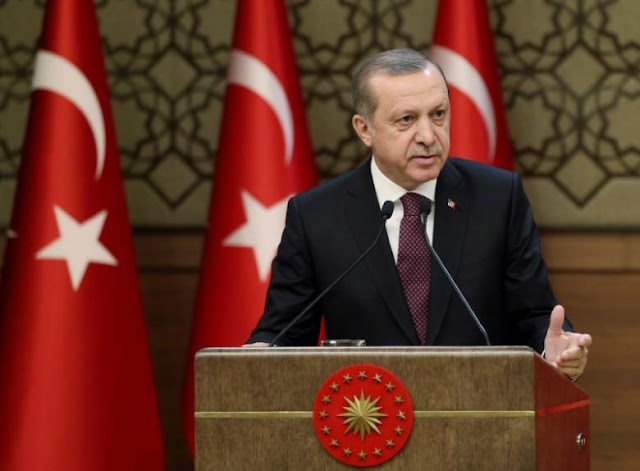 Which, incidentally, should also not come a surprise in light of the May2015 declassified Pentagon report, which claimed that ISIS was created as a Pentagon tool to overthrow Syria's president Assad.

Nevertheless, the "pot calling the kettle black" comes at a sensitive time for both the US and Turkey, which are both pivoting aggressively, one internally from Obama to Trump, while the other is shifting its foreign geopolitical allegiance from the US to Russia, which may also explain today's outburst by Erdogan.

Saying that the US have accused Turkey of supporting IS, speaking at a press conference on Tuesday the Turkish leader blamed the US-led coalition for assisting terrorists themselves. Apart from IS, he also mentioned Kurdish People's Protection Units in northern Syria (YPG) and Democratic Union Party (PYD) as groups supported by the coalition.

Earlier on Tuesday, Moscow accused Washington of "sponsoring terrorism" in Syria. Commenting on the latest National Defense Authorization Act signed into law by President Barack Obama, the Russian Foreign Ministry pointed out that the new bill "openly stipulates the possibility" of delivering more weapons to Syria, and added that those arms "will soon find their way to the jihadists," which Russia would view as a "hostile act."

Erdogan's comments echoed those from the Iranian Defense Minister Hossein Dehghan, who told RT that Washington appears unready to play a serious role in fighting Islamic State, as it has fostered terrorists itself and now wants them to remain in the Middle East.

“The Western coalition is of a formal nature, they have no real intention to fight neither in Syria nor in Iraq. We don’t see any readiness on their part to play a truly useful and meaningful role in fighting IS, because it’s them who have raised terrorists and they are interested in keeping them there,” Dehghan said.

According to the Iranian defense minister, Tehran has never coordinated its operations with the Americans and “will never collaborate with them.”

He then slammed the US' motives behind the "war on ISIS' saying that “maybe the coalition forces would like to see terrorists weakened, but certainly not destroyed, because those terrorists are their tool for destabilizing this region and some other parts of the world.”

One wonders how long before Putin is blamed for this latest political scandal, because if indeed Erdogan does provide proof of US support for the Islamic State, then the Pentagon will need a back story very fast, and what better scapegoat than the Russian president.