“Before it was hell, now we can move forward and breathe again” ~ Mohammed, from Hanano

On the 11th December 2016 I visited Hanano in East Aleppo. Hanano had been liberated days previously by the Syrian Arab Army and allies including Hezbollah and Russia. Hanano had been under a Nusra Front [Al Qaeda] terrorist regime for the last, almost, five years.

The testimonies we filmed testified to starvation, wholesale deprivation of humanitarian aid,  summary executions, torture and the use of civilians as human shields. Nusra Front were the overlord of the district, controlling an estimated 22 militant brigades funded, equipped and armed by NATO and Gulf states and condemning the Syrian civilians to a life of fear and imprisonment in their own homes. 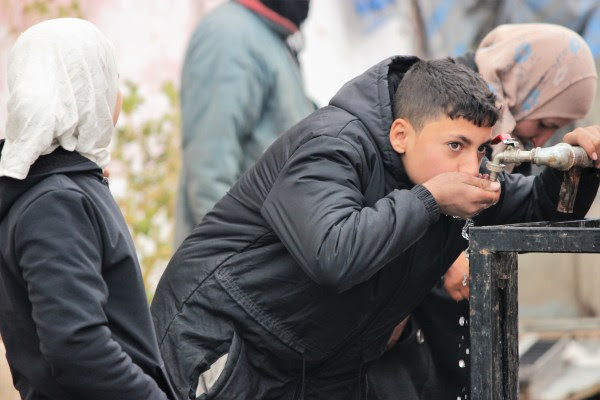 Women were married, raped and discarded en masse, children were imprisoned and anyone caught supporting the Syrian Government could be executed or imprisoned & tortured. The very antithesis of the narrative being run by the corporate media for the entire duration of the almost five years of wholesale suffering endured by both West and East Aleppo, carved into two and targeted by the Nusra Front-led terrorists and militants.

Militants like the US funded, Nour Al Din Zinki who beheaded 12 year old Palestinian child, Abdullah Issa or US “moderates”, Ahrar Al Sham, who have carried out a number of viciousethnic cleansing campaigns in and around Aleppo.

This video contains two of those testimonies, exposing the lie peddling, by corporate media, that has been allowed to permeate public opinion and narrowly failed to precipitate the devastating No Fly Zone that would have, undeniably, led to further bloodshed on an unimaginable scale.

At the end of filming two boys sat down in front of the camera and spontaneously chanted “Allah, Souria, ou Bashar bas”. “God, Syira, Bashar is enough”.