Is Angela Merkel is intentionally allowing ISIS to operate in the EU?

This story is from just before Christmas when the Russian ambassador to Ankara was assasinated.
Traces covered: NATO Auditor found dead in Belgium 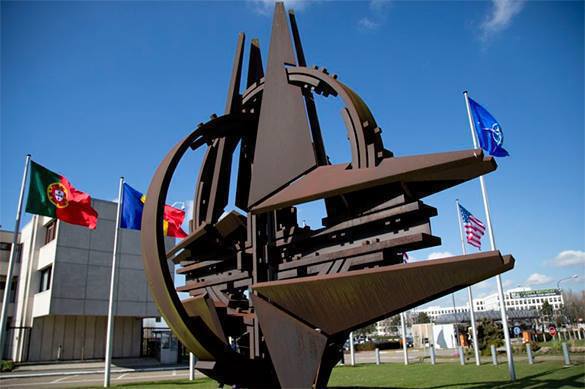 Yves Chandelon, Chief Auditor of the NATO, was found dead in the city of Andenne in the Belgian Ardennes. As it is reported, the official most probably committed a suicide. However, his family strenuously rejects this version.

The body was detected 140km away off his work and 100km away off the city of Lens, where he lived.
Three units of weapons were registered in the name of the 60-y.o. killed official. However, an unregistered one was found near the body.
Chandelon was dealing in particular with issues on countering terrorism funding.

According to the media, he was talking recently about strange phone calls he received. The investigation is being continued.

As Pravda.Ru reported, NATO's budgets have been growing lately. The latest increase was by 26bln dollars up to 918bln dollars. And the US media wonders what for NATO needs this.
Pravda.Ru

One person’s view of things

BREAKING: I believe I have uncovered evidence that Angela Merkel is intentionally allowing ISIS to operate in the EU

Angela Merkel and those within the EU and German government who are aligned with her are knowingly allowing ISIS operatives to infiltrate the EU, set up networks and stage attacks on European citizens. The goal of allowing this to occur is to create a crisis which will artificially deepen the need for greater European integration into the EU, which is of course mostly controlled by Germany and allows them to control Europe without firing a single shot (so far). Once the crisis has been created, Merkel will use it as an excuse to use the newly formed EU Army to occupy European nations. This army seems to currently be supplied by NATO and NATO officials who are in a position to discover this are showing up dead.

I. German Intelligence is knowingly neglecting to deal with ISIS operatives

In Wikileaks’ recent BND-NSA Inquiry Exhibit, there was a cache of files from the Bundesamt für Migration und Flüchtlinge (BAMF) or Federal Office for Migration and Refugees. Firstly, the language of the original German in this document is highly un-PC, showing just how little Eurocrats really care about racial sensitivity behind closed doors. They prefer to use it as a foil to coerce others into submitting to their agendas. The document covers tips that BAMF gives to German intelligence agencies looking to recruit informants from among refugee populations:

The significant portions of this document are as follows:

They are specifically looking for Taliban defectors from Tajikistan, Turkmenistan, Uzbekistan as well as civilians born in Afghanistan and Egypt as well as a few other Middle Eastern countries.

On pages 15-16 they list tiers of individuals they are looking to recruit from:
Tier 1: Males with the following personal features: Aged 18-45, single, lower-middle-class to poor background, lived in refugee camps for a while, poor occupational and societal prospects, sketchy CV, Muslim belief, doesn't support UMMA (collective community of Islamic people).

Tier 3: Individuals that resided in or have knowledge about Al-Azher University, Cairo or the El-Haramein Institute of Culture which is founded by Saudi Arabia and used to promote Wahabbism.

This is highly alarming, because it proves that German intelligence is aware of the fact that there are many individuals among the refugee population that have knowledge of terror organizations, are “defectors” from them or have been exposed to radical Islamic ideologies at certain educational institutions. Why are they not simply arresting these people and preventing them from 1) committing attacks and 2) radicalizing even more males from the refugee population?
This discovery was followed today with another which has not yet been widely discovered by the public: Moroccan government officials have stated that they tipped Germany off to the fact that Berlin truck attacker Anis Amri was planning to execute a terror event on German soil:

The article explains that Spanish and French authorities has successfully dismantled terror cells based on information passed to them by Moroccan intelligence. Why did Germany not act? It is because Angela Merkel has a vested interested in creating a crisis by allowing ISIS attacks to occur in the EU.
This apparent policy of letting a wild dog like ISIS run rampant does come back to bite them occasionally however. An German intelligence official working for ISIS was recently arrested for helping plot an attack the headquarters of Germany’s domestic intelligence agency, the Bundesverfassungsschutz (BfV):

It is very strange that Germany would be allowing this kind of thing to happen. Unless of course, one views it from the perspective that they might want incidents to occur as a result of neglecting to crack down on known and potential extremists.

A. The EU Army

Merkel was already trying to form an EU Army before Brexit occurred and accelerated the need to create some kind of force that would allow them to militarily pressure countries into abandoning plans to leave as well. European Union allies of Merkel were lobbying for this force to exist even before Brexit. What people do not realize is that it has already been partially set up:

Already EU technocrats are letting on to the public that the EU Army will be formed “much faster than people think”:

Just a few months ago, Jean Claude Juncker was requesting the establishment of a headquarters for the EU Army to operate out of. An operations center is unnecessary if there is not already a military force to run out of it:

B. NATO arms/vehicles are being used to covertly equip the EU Army

There has been quite a bit of media attention given to recent NATO efforts to posture itself militarily to “stand up to Russian aggression.” A lot of weaponry and heavily machinery has been moved into the EU and Eastern Europe/the V4 (Visegrad Group):

Here is another example of German military assets being moved into Eastern Europe to “counter Russian aggression.” Notice how they mention Trump’s election as an incentive to form an EU Army? Merkel was hoping her friend Hillary Clinton would win power and collaborate to make this project easier:

The Russia narrative is a cover story for the formation and equipping of the EU Army. NATO’s shipments of weapons and vehicles to Europe are not for the purpose of arming the alliance against Russia, but to give that gear to Merkel for her new EU force. Most of this stuff is surplus American military gear, think for example about how many unused tanks we have sitting around due to supposed Congressional incompetence.

There is ample indication that NATO is indeed engaging in this covert supply operation with the EU. The current Secretary General of NATO is Jens Stoltenberg, who allegedly was bought the position by a $584 million bribe from Norway to the Clinton Foundation. He is also alleged to be connected to the recent corruption scandal uncovered in part by the FBI. Here are some sources on that:

Given his ties to corruption and the Clintons, it is plausible that Stoltenberg is willing to collaborate with Angela Merkel, another ally of the Clintons. He is responsible for massively increasing NATO’s budget over the last few years:

Most damning is the recent death of Yves Chandelon, the Head Auditor of NATO. He was found dead 140 kilometers from his work and 100 kilometers from his home in the Belgian city of Lens. Despite owning three registered weapons, the gun used to kill him was unregistered:
http://www.pravdareport.com/news/hotspots/22-12-2016/136486-nato-0/

His death was ruled a “suicide” but his family refuses to believe that conclusion. He had told them that he had the feeling that he was being followed and had also received strange phone calls. His further revealed that he was a happy person and had made several plans for the new year. Not the profile of someone who kills themselves:
http://www.demorgen.be/buitenland/belgische-navo-topper-sterft-verdachte-dood-b8296fbb/

Why is his death significant? One of the jobs of an auditor is to make sure goods are actually delivered to their destination. Revenue cannot be recognized until service is performed. What did Chandelon find about weapons and vehicle deliveries that caused him to be murdered? Where would these lost shipments be going, if not to equip and supply another army? The EU Army?

III. How ISIS provides Merkel with an excuse to occupy Europe with her new army

With an EU army formed, Merkel would only need to look for a good excuse to deploy it. The most likely cover story would be to diffuse some kind of “humanitarian crisis.” What exactly might that crisis look like? There could be a number of reasons, such as fighting “far right racism” against minorities for example.

I personally believe that given the evidence I have uncovered about Germany’s complicity in allowing Islamic extremists to enter the EU, the evidence indicates that they are possibly hoping ISIS will stage a major terror incident in one or two locations in the EU, or perhaps across the entire Union. The militaries of multiple countries would inevitably engage in an immediate crackdown following such a severe event and this would most likely focus solely on migrant heavy areas and “no go zones” inhabited by the Muslim minorities in Europe. This would give the EU a perfect humanitarian excuse to justify violating the sovereignty of multiple European nations and centralize power with the EU government, which is mainly German controlled.

A conflict in the EU anywhere would be very bad for the United States. Look at all the locations of our military bases across Europe. We would be sucked into any kind of European conflict:
https://i.sli.mg/0Yrrin.jpg

Breitbart, I reached out to you guys this week and expressed my desire to bring my networks and the work I do to your publication but you seemed a little nonplussed about it. Andrew didn’t found your company so that you could spend your existence trolling the internet to repost stories broken by other news corporations. I’m on the market, think you have a lot of potential and want to help you guys be the ones who create breaking news