Reactions to terrorist attack in Berlin 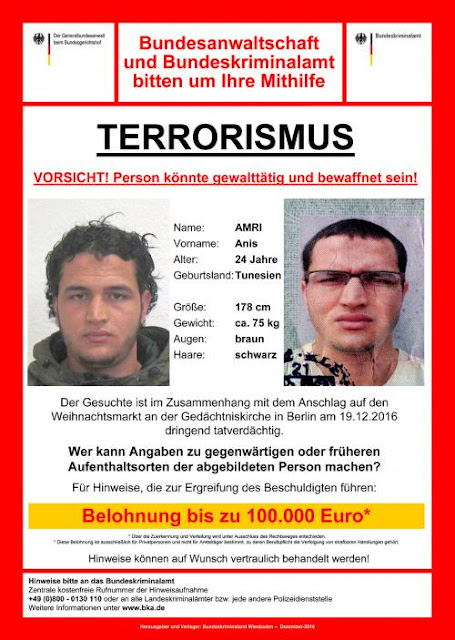 Several days ago, Merkel may have walked on her own into one a potentially career-ending, political traps as she prepares to runs for her fourth term as Chancellor in 2017, when she said has said "it would be particularly repulsive if a refugee, seeking protection in Germany, was the perpetrator" of the Monday Christmas market terrorist attack. Alas, despite having already been slammed by her political opponents, such as AfD's Frauke Petry, who have long claimed that any and all terrorist attacks on German soil are the direct result of Merkel's open door policies (the AfD and other anti-immigrant groups held a silent vigil outside Merkel's office in Berlin on Wednesday night to protest her refugee policies), it looks as if by even Merkel's own admission her government failed at every step to capture the Tunisian terrorism suspect - who we know by now was indeed a refugee seeking protection in Germany, even if it was not granted - despite having had ample opportunities.

As Bloomberg followed up overnight on just this issue, "critics are lambasting her for allowing hundreds of thousands of asylum-seekers to enter the country, allegedly without proper security checks."

After German media published photos of Anis Amri, federal prosecutors issued a public appeal for information along with the promise of a 100,000-euro ($105,000) reward for his arrest. Within hours it emerged that the man authorities warned could be "violent and armed" had in fact been known to them for months as someone with ties to Islamic extremists who used at least six different names and three different nationalities.

Even the German police union is starting to turn on Merkel: "People are rightly outraged and anxious that such a person can walk around here, keep changing his identity and the legal system can't cope with them," said Rainer Wendt, the head of a union representing German police.

According to Ralf Jaeger, the interior minister of North Rhine-Westphalia state, Amri arrived in Germany in July 2015 as the influx of asylum-seekers was nearing its peak. Although registered in the west of the country, near the Dutch border, Amri had moved around Germany regularly since February, living mostly in Berlin, said Jaeger. Within months of his arrival, authorities had added Amri to a growing list of potentially violent Islamic extremists, not all of them asylum-seekers.

"Security agencies exchanged information about this person in the joint counter-terrorism center, the last time in November," said Jaeger.

State prosecutors in Berlin even launched an investigation of Amri on March 14 following a tip from federal security agencies, who warned that he might be planning a break-in to finance the purchase of automatic weapons for use in a possible future attack. Surveillance showed that Amri did deal drugs in a notorious Berlin park and was involved in a bar brawl, but no evidence was found to substantiate the original warning.

Adding to the Merkel's headaches is the latest report from ABC, Anis Amri was known to U.S. intelligence agencies. The fact that the US and Germany, whose "intimate" relationship when it comes to surveillance is well-known courtesy of Edward Snowden, failed to communicate about the suspected truck killer, will be a major source of criticism in the upcoming political campaign.

As we noted yesterday, Amri - whose fingerprints were found on the door and inside the cabin of the truck used in the attack - had been under covert German surveillance after a tip earlier this year, but the surveillance ended in September when nothing materialized, according to The Associated Press. The intelligence painted a picture of a criminal involved in drug deals and the occasional bar brawl, but not necessarily a terrorist. Police said they were gathering a criminal case against Amri, and the last time information was exchanged regarding his case was as recently as November.

Previously, Amri who had a very troubled past, served a four-year jail term in Italy after being sentenced for charges of arson on the Italian island of Lampedusa in the Mediterranean, the closest European Union destination for migrants and refugees embarking from North Africa. He lived in the town of Kleve in North Rhine-Westphalia before moving to Berlin, Germany's capital, in February and his asylum application was rejected in July of this year. However, Amri was not deported to his home country of Tunisia because authorities couldn't verify his identity without the proper paperwork.

The Italian news agency ANSA reported that Amri was ordered expelled after his prison time in Italy. However, Tunisian authorities didn't finish all the paperwork in the required time, so Amri never was sent back to Tunisia, it reported.

Futhermore, Spiegel today reported that Amri had offered himself as a suicide bomber to radical preachers who were being monitored by the police months ago. But his messages were encoded in such a way that they weren't sufficient for an arrest.

As a result of these troubling discoveries, confirming just how easy it was for the terrorist suspect to slip between the cracks, German lawmakers have called for consequences regardless of whether Amri turns out to have been behind the wheel of the truck in Berlin.

"In my view we experienced a major shift on Monday," said Stephan Mayer, a member of Merkel's center-right bloc. "Terrorism has reached a new level in Germany. It's shaken the nation and citizens are worried. I think citizens wouldn't accept it if we simply returned to the political order of the day."

Mayer proposed extending the period that people can be held in detention prior to deportation, to give authorities more time to gather the necessary paperwork. He said authorities should also be able to deport people deemed a threat to public order.

Wendt, the police union official, said keeping tabs on all of these people was a major challenge. "From a manpower perspective it would ... be unimaginable to keep all potential threats under police surveillance round the clock," he said.

Meanwhile, late on Thursday, German Chancellor Angela Merkel said Thursday she was proud of the calm public response to the deadly attack. "In the past few days I have been very proud of how calmly most people reacted to the situation," she said about Monday's attack.

"I am certain we will meet this test we are facing."

Perhaps she is right, but with the German people, which now includes the police and even members of her own political party, already infuriated with Germany's now obvious inability to deal with the fallout of admitting over a million refugees, of whom hundreds are potential terrorists, the real test facing Merkel in the coming year - the upcoming election - is one which she may not survive. All it would take for the tipping point to be reached, is a few more terrorist attacks on German soil...