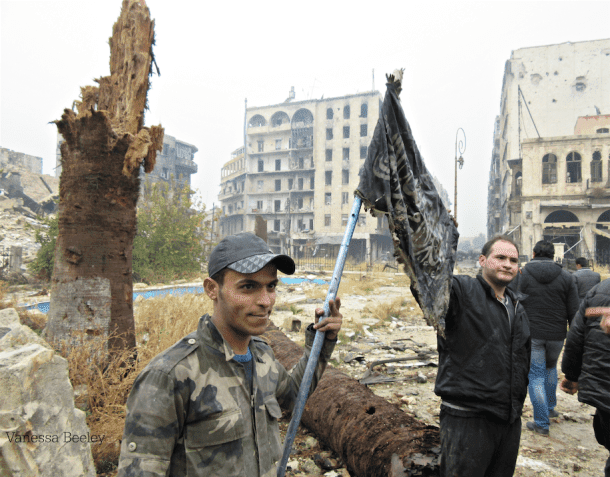 DAMASCUS – According to two reports coming out of Aleppo today, at least 14 US Coalition military officers were captured this morning in an East Aleppo bunker by Syrian Special Forces.

This story was quietly leaked by Voltaire.net, who announced, “The Security Council is sitting in private on Friday, December 16, 2016, at 17:00 GMT, while NATO officers were arrested this morning by the Syrian Special Forces in a bunker in East Aleppo.”

Fares Shehabi MP, a prominent Syrian Parliamentarian and head of Aleppo’s Chamber of Commerce published the names of the Coalition officers on his Facebook page on the 15th December (emphasis dded):

In addition to Voltaire.net, the other original report was provided by Damascus-based Syrian journalist Said Hilal Alcharifi. According to Alcharifi, captured “NATO” officers were from a number of member states including the US, France, Germany and Turkey, as well as Israel. Here is his statement (translated from French):

“Thanks to information received, Syrian authorities discovered the headquarters of high ranking western/NATO officers in the basement of an area in East Aleppo and have captured them alive. Some names have already been given to Syrian journalists, myself included. The nationalities are US, French, British, German, Israeli, Turkish, Saudi, Moroccan, Qatari etc. In light of their nationalities and their rank, I assure you that the Syrian government have a very important catch, which should enable them to direct negotiations with the countries that have tried to destroy them.”

Although these initial reports describe the individuals in question as “NATO” officers, it’s unlikely they would have been carrying NATO colors on a covert operation – and might be more accurately labeled as US Coalition officers. Note that early reports suggest that these are not standard ‘street rebel’ or jihadi terrorists but actual Coalition military personnel and field commanders.

21WIRE also received unconfirmed reports yesterday that militants had fired a missile into the Ramousa area and then tried, unsuccessfully, to get cars out of East Aleppo. It’s possible this incident could be related to today reports of captured western operatives.

This report from the Syrian Arab News Agency (emphasis dded):

“The agreement on evacuating militants and weapons from the eastern neighborhoods of Aleppo city has been suspended after terrorist groups breached it, special sources told SANA correspondent in Aleppo.

The sources said that the suspension of the agreement will remain in place until obtaining guarantees that oblige the terrorist groups to abide by all the agreement’s provisions, stressing on the Syrian side’s full adherence to the agreement and its keenness to end the bloodshed and restore security and stability to the entire city of Aleppo.”

Earlier, SANA reporter said that the terrorist groups have breached the agreement as they smuggled heavy weapons, including TOW missiles, heavy machineguns and kidnapped people via the buses and cars transporting terrorists and their families towards the southwestern countryside of Aleppo city.

The reporter added that the terrorist groups fired shells and sniper bullets on the buses and ambulances at al-Ramousseh crossing, noting that the Syrian Arab Red Crescent (SARC) and the International Committee of the Red Cross (ICRC) which are supervising the evacuation process had to withdraw all buses and cars from the crossing.

Over the past 24 hours, some 8079 terrorists and members of their families were evacuated via busses and ambulances from the neighborhoods of Salah-Eddin, al-Ansari, al-Mashhad and al-Zibdiyeh to the southwest countryside of Aleppo city”

If true, this latest news would also mean that both the Syrian and Russian governments would have additional leverage going forward in any bilateral negotiations with the US-led Coalition.

If, however, this story is kept under wraps by NATO member governments and is summarily blacked out by the US and European media outlets, then it might indicate that a deal has been struck, albeit behind the scenes, for the return of captured NATO operatives in exchange for other concessions.

If today’s report from East Aleppo is accurate, this might also help explain the hysterical behavior by the US State Department and western UN officials who have been demanding “an immediate ceasefire” – despite the fact that 99% of East Aleppo has already been liberated by Syrian government forces.

The western establishment hysterical reactions to Al Nusra’s defeat in Aleppo have included wild claims that the Syrian Army had ‘unleashed death squads,’ on its own residents in East Aleppo and were openly ‘executing women and children in the street,’ and ‘burning children in the street,’ as well what appear to be more fictional reports circulated in US media mainly by Michael Weiss of The Daily Beast via CNN, claiming that Syrian Army was committing “mass rape” against residents of East Aleppo. His article entitled, “Women in Aleppo Choose Suicide Over Rape, Rebels Report,“ made a number of outlandish claims including:

“Activists and rebels in the besieged city say mass executions have begun and children are burned alive as Assad’s Iranian- and Russian-backed forces move in.”

Not surprisingly, aside from unnamed “UN sources”, Weiss claims to have received his information from none other than the discredited US and UK-financed pseudo ‘NGO’ known as the White Helmets.

Back in September, numerous reports suggested that a western command center located behind terrorist-held lines had been targeted and destroyed by a Russian missile strike. Prof Michel Chossudovsky wrote:

This report was neither admitted, nor was it denied by US Coalition sources at the time. However, one mainstream Israeli source, The Times of Israel, did report the incident.

For anyone who has been paying close attention to the Syrian Conflict, seeing NATO special forces or “contractors” working with ‘rebel’ or terrorist fighters inside of Syria is nothing unusual. Numerous reports have been filed of British soldiers assigned to fighting groups to help with training, strategy and logistics. In June 2016, The Telegraph admitted that British special forces were helping one rebel group, “… with logistics, like building defences to make the bunkers safe,” said one ‘rebel’ fighter. Other reports, including the LA Times which detailed CIA operations used to arm militants, including Al Nusra Front (al Qaeda in Syria) who were the terrorist force in charge in East Aleppo. Other revelations of US covert involvement include The New York Times,and also information on US (NATO by another name only) covert operations provided to the Wall Street Journal.
South Front also notes:

“Earlier in December, SF already noted that the US despearate attempts to push a “diplomatic solution” in Aleppo could indicate that the Obama administration stalling for time to extricate US mercenaries and special service members from the Aleppo pocket:”


Considering that US-led coalition military advisers have been widely operating across Syria, training and assisting to the so-called “moderate opposition” openly linked with al-Qaeda, the recently appeared reports are likely true.

For instance, British military advisers have officially arrived to Syria to restore combat capability of the ‘moderate’ opposition, retreated from Aleppo…”

21WIRE can also point out that throughout fighting in the Donbass in eastern Ukraine, during the period of May 2014 to the present, numerous incidents have been reported where NATO military soldiers and operatives have been both spotted, and captured by rebel forces, and in most cases these reports have been muted, more than likely because of ‘horse trading’ taking place as an extension of wider diplomacy.


Contributors to this report were Patrick Henningsen and Vanessa Beeley.
Posted by seemorerocks at 16:10