People disappear off Facebook and often one doesn't notice.


Don Debar, who hosts CPR Radio and often appears on RT or Press TV is one of those voices I trust and regard as a reliable commentator.

Just before Christmas, after a visit to Cuba, he was shut out of his Facebook account on the grounds of "suspicious activity". As he refused to comply with their demands 10 days later he is still excluded. 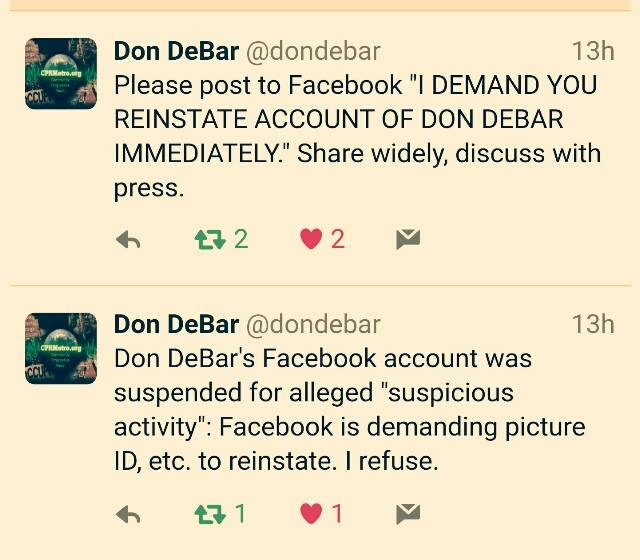 We, too, are “Deplorables”


Don DeBar is a highly-respected broadcast journalist and a courageous leader and former candidate for the Green Party.  As Senior Producer at Community Public Radio CPR News (CPR), he has taken a strong stand against U.S. imperialism and is an outspoken advocate for social justice of every kind.  In 2010, he was among more than 100 activists and journalists from a variety of organizations, religious groups and media outlets who attended a New York gathering with former Iranian President Mahmoud Ahmadinejad in the face of an incendiary media campaign that tried to silence them. 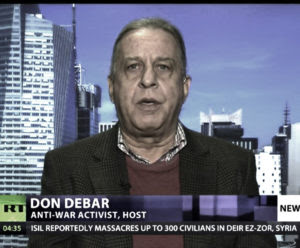 Don DeBar.
Now, the so-called “fake news” hysteria is again ushering in a new McCarthyism, with calls for silencing free political speech and for shutting down access to alternative news sites.  Following a recent trip to Havana, Mr. DeBar was locked out of his Facebook account based upon allegations of “suspicious activity.”  He has been informed that the only way to reinstate his account is to provide Facebook with sensitive documentation.  We will not allow him to be silenced.

Jill Stein’s Recount debacle has gone out with a whimper — no recounts in Michigan and Pennsylvania, and Trump actually gaining 162 votes in Wisconsin.  But the media campaign to delegitimize Trump’s presidency — if not to actually overturn it — screeches on.  Amid rising hysteria over Russian hacking already at fever pitch, part 2 of this interview with Don DeBar (see here for part 1) continues with his remarks on the past election and the political terrain that is starting to take shape.

Reflecting on the early days of the latest Presidential election season, we recall that the narrative being pushed by the mainstream press could be summed up by one word — Dynasty.  Before a single primary vote had been cast, the Beltway had smugly predicted a contest between the Bush and Clinton dynasties.  No need to dredge up messy issues like the gutting of the American economy or question the premises of the endless Global War On Terror.
Under “Bush vs. Clinton:  the Sequel,” Jeb and Hillary would spar over how to best maintain U.S. Imperialist hegemony and corporate rule, and how far the nation could go in tolerating a secular world view of the LBGQT community and women’s rights vs. the Christian Right’s scorched earth campaigns to crush gay rights and abolish abortion.  But as they say, the best laid plans of mice and men …
Two candidates emerged to spectacularly muck up the Beltway’s best laid plans.  Coming from ostensibly opposite ends of the political spectrum, both were hitting a very similar raw nerve for the cheering tens of thousands who were filling their rallies, who knew something was very wrong, and that the American Dream had morphed into the American Nightmare.
As Trump’s momentum proved inexorable, and Sanders grudgingly got on board the Hillary Express, the Beltway game plan shifted.  The Hillary camp needed to finish off those Sanders followers who had booed Bernie’s calls to get in line.  Then they could move sharply to the right, and isolate the radical upstart Trump (Hillary’s opponent of choice).  The end-game would be a center-right, unitary Reich that could rule for a (demographically-insured) thousand years with the Democrats setting the pace for war and austerity.  Didn’t work out that way, or as Snidely Whiplash put it, “Curses, foiled again!” 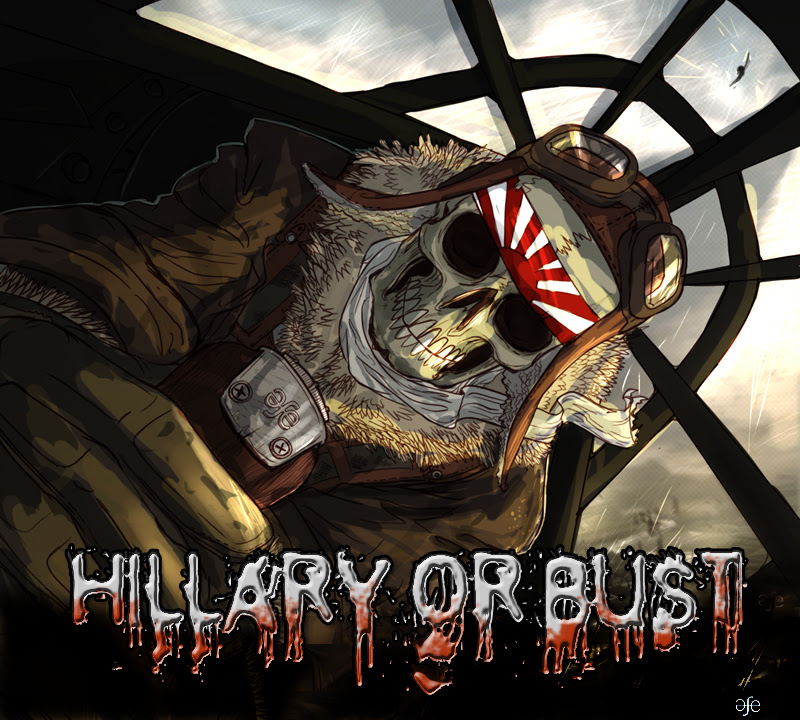 Kamikaze Democrats.
Trump upset that apple-cart in November and his stubborn unwillingness to play along with the demonization of Putin and Russia has large segments of the ruling elite in a panic.  So in a desperate bid to overthrow his electoral victory they’re attacking Trump through recounts (failed), or pressuring the Electoral College to go rogue through the “Russian-hacking” frenzy.  If these Kamikaze Democrats couldn’t keep Trump out of the White House, they might at least leave him politically crippled.
How this all plays out remains to be seen.  But left out of these scenarios are the American people, who are in the midst of a developing “working class uprising,” and whose voices may yet be heard. In Part 2 of this interview, Don DeBar explores the under-currents that both the Beltway Establishment and the so-called Left Establishment have ignored to all our peril.......

To read the interview GO HERE


Here is his account of his recent visit to Havana


And his latest broadcast, summing up events of 2016