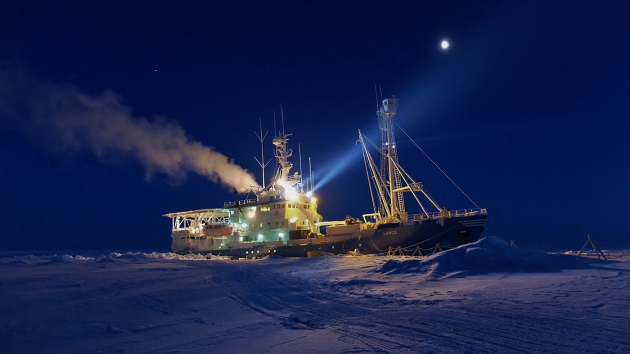 A daring 2015 expedition that collected rare measurements of the Arctic in winter found that sea ice near the North Pole was thinner and weaker than expected.

“This thinner and younger ice in the Arctic today works very differently than the ice we knew,” says Mats Granskog, a sea-ice researcher at the Norwegian Polar Institute in Tromsø and chief scientist on the expedition, called the Norwegian Young Sea Ice (N-ICE2015) project. “It moves much faster. It breaks up more easily. It’s way more vulnerable to storms and winds.”

The team froze its research vessel, Lance, into the ice pack north of Norway’s Svalbard archipelago in January 2015. As the ship drifted in the ice, the research crew gathered data and camped on nearby ice floes. The campaign, which ended in June 2015, was the first major effort to collect winter data in that part of the Arctic, says Granskog. The only other large expedition to observe the region's winter ice was the Surface Heat Budget of the Arctic (SHEBA) project; between October 1997 and October 1998, researchers funded by the US National Science Foundation monitored conditions north of Alaska.

“Measurements from the Arctic in winter are quite rare,” says Von Walden, an atmospheric researcher at Washington State University in Pullman who participated in the Norwegian expedition. “They are very difficult to obtain because quite honestly it’s dangerous work.”

The team had to move its operations several times because of instability in the ice floes where it camped. “We had to battle the dark, the cold, violent storms, ice that broke up under our feet many times,” Granskog says. “We had to escape from the ice and rescue our camps. We had to look out for polar bears that looked friendly, but weren’t always so friendly to us or our Бequipment.” The Norwegian project cost roughly US$5 million and involved more than 70 researchers from 10 countries. The researchers presented some of the first results from the expedition this week at the American Geophysical Union’s Fall Meeting in San Francisco.

Measurements made during summer expeditions have shown widespread thinning of Arctic sea ice, but researchers were not sure what the conditions were like in winter. “We saw a new Arctic where the ice is much thinner, only 3 to 4 feet thick,” says Granskog. “And this ice functions very differently than it did 10 years ago.”

That had ripple effects below the ice, says Amelie Meyer, an oceanographer at the Norwegian Polar Institute. “When storms came through, it moved the ice so fast that it actually stirred water under the ice. This helped bring warm water from below much closer to the surface and actually induced some melt of the ice from below.” 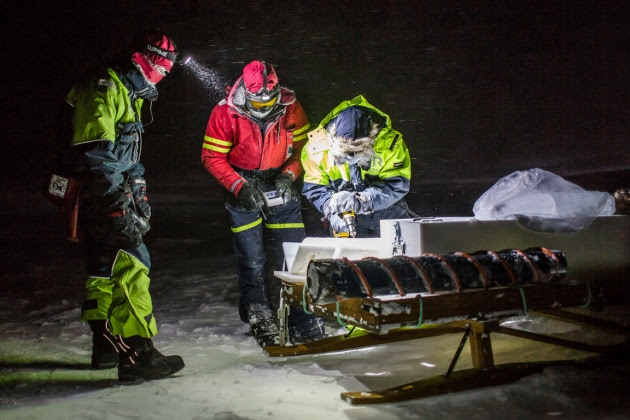 As spring returned to the Arctic, the ice melted much faster than expected in some areas. On one morning near the end of the expedition, the researchers awoke to a rapidly growing crack in the ice where they had made their camp. The team had to scramble to collect its gear and equipment before the items — and the data — sunk into the sea. “It was a little epic,” says Meyer. “We did recover absolutely everything.”

The researchers were surprised to find an explosion of phytoplankton growth under the snow-covered pack ice in mid-May. This is the earliest and more northern phytoplankton bloom ever witnessed, they say.

Arctic researchers say that the observations from the Norwegian project will help to fill gaps in knowledge about the rapidly changing region. Thirty years ago, the majority of the winter ice in the Arctic ocean was thick multi-year ice that grew over multiple winters. But now, more than three-quarters of the ocean in late winter is covered by much younger and thinner first-year ice.

The SHEBA project studied multi-year ice and researchers do not have much information about first-year ice, says Donald Perovich, chief scientist of SHEBA and a sea ice researcher US Army Corps of Engineers' Cold Regions Research and Engineering Laboratory in Hanover, New Hampshire.

“One of the things that’s really important about N-ICE is that it’s looking at first year ice in an Arctic ocean that’s dominated by first-year ice,” he says.
An international team is now planning to freeze a German icebreaker into Arctic sea ice in October 2019 for a year-long investigation that will focus mostly on first-year sea ice.