Confirmation received of Anis Amri's death by Italian police in Milan, following his attempt to draw a gun on police when stopped for questioning. 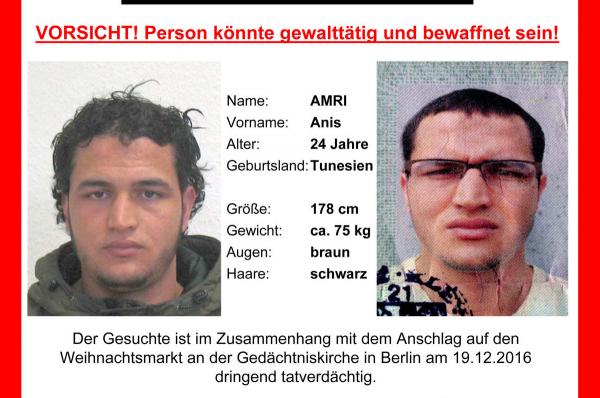 The manhunt for Anis Amri, the suspected terrorist who the German authorities say is the most likely suspect for the terrorist attack on the Berlin Christmas market, has ended, with the Italian and German authorities confirming that he was shot dead by Italian police earlier today in Milan.

According to the Italian authorities, when police stopped Anis Amri in Milan, he drew out a gun and was immediately shot dead.

Jihadi terrorists who carry out terrorist attacks in Europe are however almost invariably killed or kill themselves rather than be caught.  There is nothing therefore unusual or surprising about Anis Amri’s death, and nothing should be read into it.  As for whether he really was the person who carried out the Berlin terror attack, the case against him seems to be overwhelming.  However his death does mean that it will now be more difficult to find out whether Anis Amri acted on his own or whether he acted under orders as a member of a terrorist cell.   Unfortunately at the moment the latter looks more likely.

What is far more concerning about Anis Amri is that an individual such as him, suspected of having Jihadist sympathies and as it turns out possibly a signed up ISIS militant, was able to move about Germany freely, and that the German police not only lost sight of him, but failed initially to identify him, and lost sight of him again directly after the terrorist attack.

In some countries that would lead to a judicial inquiry into what on the face of it was serious case of negligence.  Given the political stakes in Germany, it will be interesting to see if that happens.

As the investigation and manhunt for the truck driver continue, here are five things to consider.
Elena Troyanova 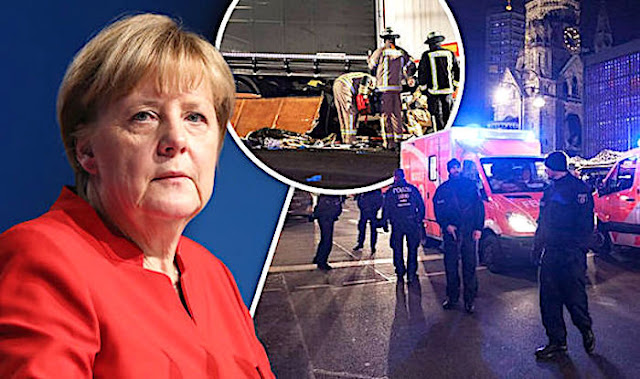 1) Merkel’s reaction. A horrendous terror attack on a Christmas market in Berlin on Monday evening left 12 people dead and 48 injured. Chancellor Merkel, however, only addressed the public next day, some 15 hours after the tragic event. She was ‘appalled, shocked and deeply sad about what happened at Breitscheidplatz’. Merkel admitted that she had ‘no easy answer as to how we can live with what happened’.  She also outlined that: ‘it would be particularly unbearable for all of us if it were confirmed that an asylum-seeker had committed this crime.’

It sounds as if preventing any challenges to her open-door refugee policy is of higher importance to the state than assuring safety of its citizens. At the time of such a tragedy, you would expect words of reassurance and a clear message that the government will take all possible measures to protect its people from possible acts of terror in the future. Instead, Merkel yet once again tried to justify her refugee policy, and her attempt sounded cynical toward those murdered and injured in the attack.

2) The ‘wrong’ guy. The first suspect, a Pakistani asylum-seeker Naved B., was detained by the police after an eyewitness allegedly saw him run from the truck, followed him for a couple of kilometers and informed the police. Naved was questioned till the evening of the following day, when the police concluded that there was not enough evidence to keep him in detention.

According to the German paper Tagesspiegel, Naved was previously detained under accusations of sexual assault but released by the police. Perhaps sexual attacks on women are after all not such a big deal for the German authorities.

3) One well-hidden ID. Only on Wednesday morning did the police find an ID of a 24 y.o.Tunisian asylum-seeker Anis Amri. The paper found in a wallet under the driver’s seat, Duldung, provide that Amri applied for an asylum but his application was rejected thus making Amri a subject for deportation. So why did it take the police almost 40 hours to discover that wallet?

4) A coincidence? Anis Amri spent four years in prison in Italy for burning down a school before he came to Germany in the summer 2015. According to Spiegel, Amri applied for an asylum in Kleve, Nord-Rhein-Westphalia, in April 2016. In June 2016, his asylum application was rejected as ‘unsubstantiated’. Just like another 200.000 asylum-seekers in Germany, whose asylum applications were turned down, he received a paper confirming that he is a subject for deportation but can stay in the country till the deportation takes place.

A rejected asylum-seeker can only be deported if he has a valid document (a passport or an ID), and if his country of origin co-operates with the deportation. Both were not the case with Amri. Tunisia would not admit for months that Amri is indeed a Tunisian citizen. On the other hand, Amri was registered in Germany under several different identities.

On Wednesday, two days after the terror attack, the German authorities finally received all required documents from Tunisia. At a press conference held in Düsseldorf on Wednesday, Ralf Jäger, Interior Minister of NRW, refused to comment on this, what seems to be truly amazing, timing.

5) Flaws in security. Anis Amri was under the police radar for several months as an ISIS sympathizer. It was known to the German authorities that Amri had a connection to a notorious ISIS recruiter Abu Walaa, referred to as a highest representative of ISIS in Germany. Amri sought to buy automatic weapons and tried to recruit an accomplice for a terror attack. As Süddeutsche Zeitung reports, the investigators had information that Amri planned to fight for ISIS in Syria and had trainings in preparation for his fights. And nevertheless, he was still able to remain in Germany.

Amri was associated with a group of ISIS sympathizers whose priority was to carry out terror attacks in Germany, hence his trip to Syria was delayed. One of the group’s plans was assassinations of police officers with hand grenades. Amri was identified by the German authorities as ‘highly dangerous’, detained earlier this year and yet released. For several months Amri was able to move freely across the country.

He was on the police radar in Nord-Rhein-Westphalia till February 2016, and then in Berlin from March till September of this year when his surveillance was lifted. As Amri is still at large, the danger of another terror attack remains very high.

What is rather chilling about this whole tragedy is the question: how many more terrorists, of whom the police may well be aware, are there awaiting their turn to attack innocent people?