BRITISH AND US TROOPS ALONGSIDE JIHADISTS IN ALEPPO 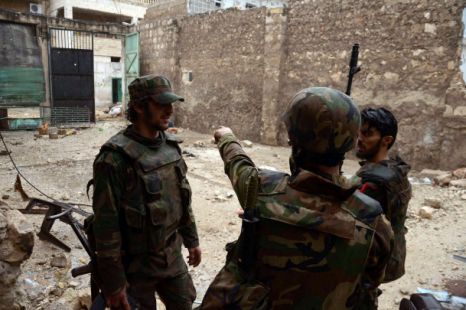 Free Nations,
18 Deember, 2016
230 US Army instructors and 54 British troops, 8 French and two Dutch artillery specialists were trapped in Aleppo with ISIS jihadists by Syrian and Russian forces. The Americans asked the Russian Foreign Minister Lavrov to keep this quiet – for obvious reasons! I have this from a reliable source.
What were NATO troops doing fighting alongside ISIS, Al Qaeda and al Nusra Front extremists ? Such rebels have massacred Christians, executed prisoners of war, held civilians hostage, shot those who tried to escape as the Syrian Army moved in and attacked coaches sent to evacuate civilians (and even their own fighters) from Aleppo.
They have burned buses sent to the towns of Foah and Kefraya (to evacuate loyalist Syrian troops and mainly Shia civilians as a quid pro quo for the evacuations of their own from Aleppo). And yet it is in the company of such extremist Islamic fighters that British (and US, French and Dutch) soldiers have apparently been fighting.
You will not hear this from the BBC or the British or US Governments, nor will you hear about all the weaponry sent to the “good rebels” which was handed over to Islamist extremists. No wonder NATO troops could not distinguish who they were fighting with! Even US Congresswoman Tulsi Gabbard, an Obama fellow Democrat from Hawaii, says that the CIA has been selling guns to Al Qaeda and ISIS for years.
Gabbard has proposed a bill to stop Obama’s Muslim Brotherhood appointees at the CIA, called the “Stop Arming Terrorists Act.”
Contrast Obama’s behaviour with Vladimir Putin’s warning to the US – unheeded – of the dangerous Islamist Tsarnaev brothers who went on to bomb the Boston marathon killing 3 and wounding 260. On the 13th December The Russian Centre for Reconciliation of the Opposing Sides in Syria said it had helped 7,796 civilians leave rebel-held areas in Aleppo in 24 hours – but the mainstream media never mentioned that either of course.
Politicians are forever referring to Russian “aggression” in Syria – but Russia are in Syria by invitation of the Government. Western forces are there illegally, allied with, among others, known terrrorist groups like Al Qaeda and the Al Nusra Front – bombing Government forces even after declaring a cease fire – and then complaining that the cease fire broke down!.
We are also responsible for much suffering in Syria by enforcing sanctions – with resulting shortages of food. Those sanctions, according to the World Health Organisation and the bombing campaigns of the anti Government forces have also caused a critical shortage of medicines. Before the US supported war against Syria the country produced 90% of its own medicines and drugs.
The German news magazine Der Spiegel tried to defend itself against the attacks of its own readers for not reporting with the same sympathy for civilians in Mosul (where NATO bombs are supporting the Government of Iraq’s attack) as they do for the civilians in Eastern Aleppo (where Russian and Syrian Government are attacking). Der Spiegel used a video showing that in Mosul “people have water, electricity, enough food. Nobody was starving to death there yet” – except it turns out to be a video made by Daesh, the Islamic extremists who have waged a war of terror inside Mosul.
When schools are attacked and children killed by NATO’s “rebels” little is heard – just as we heard nothing of the deliberate targeting by NATO of a mobile Russian hospital in Aleppo. No one in the West believes the propaganda of their own “mainstream media” – at least since the lies told to instigate the war against Yugoslavia (the fraudulent “concentration camp” image, the photo of a skeletal prisoner who is as skinny today as then, the misattributed bombing of Sarajevo market).
But the twisting of news in Syria is extreme. The West has virtually no journalists on the ground (not least because our so called “rebel allies” would murder them) and relies on extremists’ versions of the truth sent out by unverifiable individuals on their iPhones (the BBC’s “local” correspondent Lyse Doucet is in fact in Beirut – 206 miles away!)

Posted by seemorerocks at 14:16