Indian banks are fearful of running out of cash as lines queue up to withdraw money. 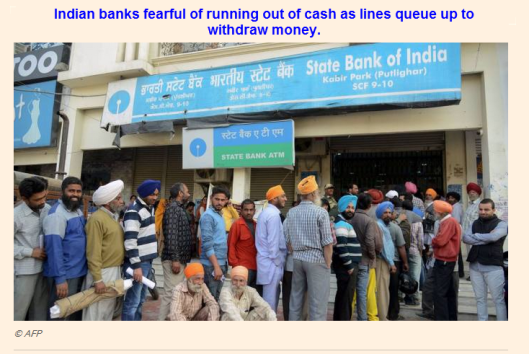 Bankers say they cannot cope with any sudden increase in demand, and warn against lifting cash withdrawal limits.


A decision by New Delhi on November 8 to scrap all large-denomination banknotes overnight removed 86 per cent of India’s currency from circulation. In an effort to prevent banks running out of cash, the finance ministry then imposed strict limits on the amount of new notes that could be withdrawn. Customers can currently withdraw just Rs2,500 from an ATM per day — equivalent to $37 — or Rs24,000 over the counter per week.

“If the government lifts the limits on Friday and there is a sudden rush, banks will be totally dependent on the central bank to give them enough liquidity,” said Soumyajit Niyogi, associate director at India Ratings and Research. “The Reserve Bank of India has been giving assurances that it has enough cash but reports of how much currency there currently is in the system suggest this might not be the case.”

New Delhi claims that purging most of India’s old cash supply, and replacing it with a smaller quantity of new banknotes, will eliminate illicitly earned or unaccounted for income that has been beyond the reach of tax officials.

But as of December 19, banks had replaced just 38 per cent of the Rs15.3tn in demonetised notes that was sucked out of the system by November’s announcement, according to RBI data.

The figures have alarmed bankers, who are now urging the government not to lift the curbs immediately. One executive said: “The government and the RBI need to make sure there is enough cash in the system before they lift the withdrawal limits.” A private banker told the Indian Express newspaper: “If the limits are relaxed, people will ask for more cash and there is limited cash. This will only turn banks into villains.”

When the policy was first announced, the government estimated that Rs5tn would remain undeclared as it would be part of illicit money hoards. But R Gandhi, RBI deputy governor, said earlier this month that over Rs12tn had already been handed back, and a newspaper report on Wednesday said the figure had since climbed to Rs14tn, leaving just over Rs1tn remaining.

This suggests either that the amount of illicit money in the system was overestimated by the government – or that new ways to launder cash have been discovered despite the government’s efforts.

The RBI did not respond to a request to comment.

Speculation is rife that further unorthodox measures are coming: Modi to Crank Up Campaign Against India’s Black Money.

Well before India’s surprise ban on using 86 per cent of its cash supply, rightwing circles were abuzz with speculation about prime minister Narendra Modi taking such a step to fight so-called black money.

Mainstream economists paid little heed to the chatter — deeming it “too preposterous” to take seriously, given the economic damage it would inflict.

But with India now reeling from the acute cash crunch triggered by the decision to cancel its old Rs500 and Rs1,000 notes, many economists and observers are debating what other unorthodox economic policy experiments may lie ahead.

Mr Modi is expected to intensify his campaign against black money, with his next target likely to be property purchased with illicit wealth and not registered in the true owners’ names. Speculation is rife that he is also seriously considering other dramatic and unusual reform measures — including possibly abolishing income tax and replacing it with a banking transaction tax.

The hit to India’s GDP will be much larger than expected.

Nonetheless, it appears that Modi is prepared to follow up with the popular economic philosophy: If it doesn’t work, do more of it.