Kremlin Warns Of Response To Latest US Sanctions, Says "Almost All Communication With US Is Frozen"


In response to the latest imposition of US sanctions on Russia, the Kremlin said on Wednesday that the new sanctions would further damage relations between the two countries and that Moscow would respond with its own measures. "We regret that Washington is continuing on this destructive path," Kremlin spokesman Dmitry Peskov told reporters on a conference call.

As a reminder, on Tuesday the United States widened sanctions against Russian businessmen and companies adopted after Russia's annexation of Crimea in 2014 and the conflict in Ukraine. 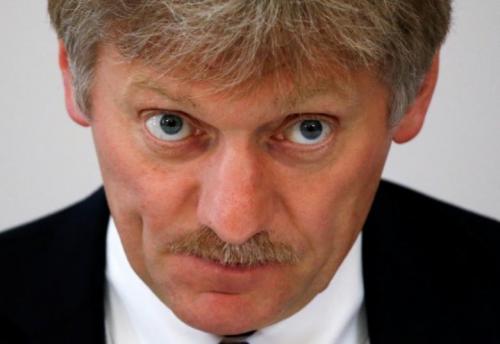 Then again, it is difficult to see how sanctions between the two administration could be any more "damaged": also on Wednesday, the Kremlin said it did not expect the incoming U.S. administration to reject NATO enlargement overnight and that almost all communications channels between Russia and the United States were frozen, the RIA news agency reported.

“Almost every level of dialogue with the United States is frozen. We don’t communicate with one another, or (if we do) we do so minimally,” Peskov said.

Additionally, RIA said that according to Peskov "he did not know whether President Vladimir Putin would seek re-election in 2018."

"Everyone's heads are aching because of work and with projects and nobody is thinking or talking about elections," Peskov said.

Then again, the sanctions may soon be history. According to a Bloomberg report, the U.S. will start easing its penalties, imposed over the showdown in Ukraine in 2014, during the next 12 months, according to 55 percent of respondents in a Bloomberg survey, up from 10 percent in an October poll. Without the restrictions, Russia’s economic growth would get a boost equivalent to 0.2 percentage point of gross domestic product next year and 0.5 percentage point in 2018, according to the median estimates in the poll. 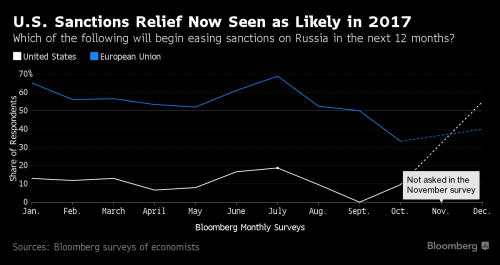 “It’s still a toss-up whether the U.S. will ease sanctions quickly, with the EU lagging, but the direction of travel is toward easier sanctions or less enforcement, which could reduce financing costs,” said Rachel Ziemba, the New York-based head of emerging markets at 4CAST-RGE. “We think the macro impact would be greater in the medium term than short term as it facilitates a rate easing trend that is already on course. In the longer term, it gives more choice of investment.”

Trump, who’s called President Vladimir Putin a better leader than Barack Obama, has said he may consider recognizing Russia’s annexation of Crimea from Ukraine and lifting the curbs. While dogged by concerns that Russia intervened to tip this year’s elections in the Republican candidate’s favor, Trump has already showed his hand by planning to stack his administration with officials supportive of closer cooperation with the Kremlin, from Michael Flynn, the president-elect’s national security adviser, to Exxon Mobil Corp. chief Rex Tillerson, a candidate for secretary of state.

An equally important consequence of any policy change by Trump would be its affect on the EU’s own penalties on Russia, with more economists saying the bloc will follow suit. Forty percent of respondents said in the Dec. 16-19 survey that the EU will begin easing sanctions in the next 12 months, compared with 33 percent in October.

“If the U.S. eases sanctions, it won’t be possible to achieve a consensus among EU member states to keep their sanctions regime in place as currently formulated,” said Charles Movit, an economist at IHS Markit in Washington.

Alexander Mercouris
the Duran,
21 December, 2016
In the last month of its existence the Obama administration imposes more sanctions on Russia whose frankly symbolic nature seem primarily designed to embarrass Obama's successor Donald Trump and to complicate Trump's attempt to appoint Rex Tillerson Secretary of State.
The Obama administration leaves office with a sting in its tail, announcing more sanctions against Russia over Crimea and the war in the Donbass.

The additional new sanctions are minimal and largely symbolic.  They affect nine regional units of the Russian gas producer Novatek, a number of subsidiaries of the Russian Agricultural Bank, Crimean Ports, Crimean Railways, the Stroiproekt Institute, which is one of the organisations involved in designing the Kerch bridge project, the Karst company, which is one of the main subcontractors for the Kerch bridge project, the Transflot shipping company, two ships belonging to the Transflot company (Marshal Zhukov and Stalingrad), and FAU Glavgosekspertiza Rossii, which is the Russian agency responsible for expert reviews of design documents and findings of engineering surveys.

In addition individual sanctions have been imposed or extended against 7 individuals.

Six of these individuals (Kirill Kovalchuk, Dmitri Lebedev, Dmitri Mansurov, Mikhail Klishin, Oleg Minaev, and Mikhail Dedov) are sanctioned because they are connected to Bank Rossiya, ABR Management, or Sobinbank.

Bank Rossiya was placed on the US Treasury’s original sanctions list in 2014.  The Obama administration believes – quite groundlessly – that Vladimir Putin has a personal connection to Bank Rossiya, and has insinuated that he is in fact its owner.  There is in fact no evidence that Vladimir Putin had any special connection to Bank Rossiya before US sanctions were imposed on the bank in 2014, though after the sanctions were imposed, and in response to them, Putin publicly said he would open an account with it.

Prigozhin is moreover accused of

having materially assisted, sponsored, or provided financial, material, or technological support for, or goods or services in support of, senior officials of the Russian Federation.

The expression “senior officials of the Russian Federation” is widely recognised code for President Putin himself.

If there is an overarching theme to these new sanctions, it is that they either sanction individuals and companies engaged in upgrading Crimea’s infrastructure – in particular the Kerch bridge – or continue the practice of targeting individuals the Obama administration has (wrongly) convinced itself are custodians of Vladimir Putin’s mythical billions.

The Russians have already made clear that the new sanctions will not affect the Kerch bridge project, and that they reserve the right to undertake what they call an “asymmetric response” to them.

What does the Obama administration achieve by imposing these ineffectual sanctions a month before it leaves office?

The short answer is that the sanctions do not seem intended to target Russia so much as Donald Trump, who has made clear that he wants to improve relations with Russia.  In particular they seem designed to make more difficult the Senate confirmation of Rex Tillerson (Donald Trump’s choice for Secretary of State) who as CEO of Exxon has made known his opposition to the sanctions.  Quite possibly demands will be made that Trump and Tillerson commit themselves to maintaining the sanctions in order to secure Tillerson’s confirmation.

If so then this shows the extent to which hostility to Russia has become for the Obama administration an obsession.  It seems that even in its dying days it is doing all it can to make sure its hostility to Russia remains US policy even after it is gone, by trying to tie the hands of the next President, who is known to favour a different policy.

The Russians themselves have understood the frankly pathological quality behind this latest action, making dark predictions that it won’t be the last one before the Obama administration ends its life.  Russian Deputy Foreign Minister Sergey Ryabkov said as much shortly after the new sanctions were announced

I won’t be surprised if on January 20, the day of inauguration of the next US president, one minute before Donald Trump takes office, at 11:59, we will once again see behind some curtain, in the corner, those who continuously produce such kind of decisions once again inventing certain rescripts, decisions, pushing into an abyss relations with Russia that are already in tatters due to Washington’s irresponsible and senseless policy.