TU-154- Not terrorism but an act of war by NATO

The evidence is starting to come in and though the Kremlin has not made an official announcement as to the cause of the crash of Russia’s military passenger plane the TU-154 off the coast of Sochi – it is starting to look more and more like an act of War according to some experts. We recently listened to a Russian talk show where the guest was a Russian Reserve Colonel, he was the first to suggest that the plane was downed intentionally. The Colonel pointed out that the Pilot had time to contact the flight tower to report problems but failed to do so, he noted that the plane has 3 engines and could still fly with only two, many other points he made that got my curiosity up.

Today Pravda reported according to different experts that the fateful flight may have been downed by a“Radio Electronic Attack” . The article addressed all the evidence that had come to light as of the publication of this article. Life News reported that the flight data recorder had the cockpit crews final words on it: “the flaps, damn it!” followed by “Commander, we’re going down!” according to Life News, citing its source. These words add to the fact that a witness standing on the shore stated that she could hear the engines of the jet then suddenly that stopped followed by a huge splash sound, no doubt the fuselage hitting the Black Sea, the witness testimony was noted in the online French news source; La Cause Du Peuple. This French source also noted:
We saw in our article It’s the CIA that caused the catastrophic fall of the Russian plane in the Black Sea, that this fall is due to a radio-electronic attack commissioned by the CIA. According to the Russian expert Alexander Artamonov, the executants could be French ships that were present in the Black Sea.
Pravada used several experts that noted the fact all engines stopped simultaneously, the flaps were locked and what the public was told the plane turned 180 degrees was not true. Other experts interviewed by Pravda cited the crew did not contact the air-traffic controllers, nor did anyone try to use a cell phone but had time to put on life jackets. All the evidence seem to point to a Radio Electronic Attack.
So the crew had time to warn them, but not the controller. It fits into the electronic version of the attack. But this is not terrorism, it is a war with NATO. Pravada.ru


Tu-154 crashed as a result of NATO's covert operation? 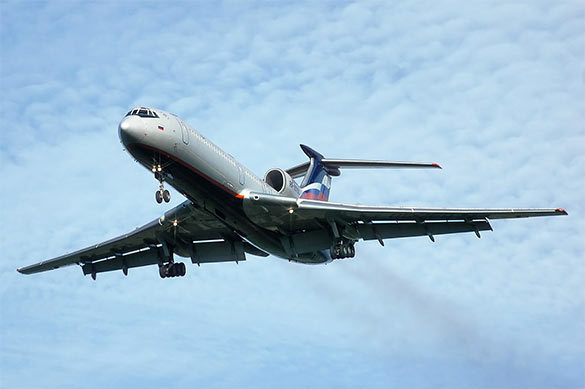 Russia's Ministry for Transportation does not consider a terrorist attack to be one of the versions that led to the crash of the Tu-154 passenger airliner of the Russian Defence Ministry in the Black Sea on December 25. For the time being, we know that the weather was fine, the pilots were experienced, and the aircraft was technically sound.

The crash of the Tu-154 over the Black Sea looks very much like the explosion of the Russian passenger jetliner over Sinai Peninsula, when the Federal Security Bureau made an official announcement about the terrorist attack only two weeks after the crash. There is another version - of radio-electronic attack.
Black boxes may not give an answer to the question of whether there was a terrorist attack on board the Tu-154. This has already been the case in the investigation of the Sinai plane crash, before specialists found traces of two-component explosives in a can of Coke, hidden in a seat pocket. The explosion caused the plane to collapse in midair. This explained the reason why the fragments of the aircraft were scattered on a large territory, FSB Director Bortnikov then said.

The Tu-154B MO, Flight RA-85572, took off from Chkalovsky military airfield near Moscow on December 25th. The aircraft was en route to Damascus with a refuelling stop in Mozdok on a regular route across the Caspian Sea, Iran, Iraq and the whole of Syria. Mozdok was closed, and the plane detoured for 408 km in the opposite direction, to Adler, even though there were other airports working nearby (Mineralniye Vody, Nalchik, Makhachkala). Allegedly, the passengers of the aircraft were not allowed to leave the airplane in Adler for two hours. Reportedly, no one boarded the plane and nothing was loaded on the aircraft either. The plane was only refuelled, and then it took off at 5.25 a.m. Two minutes later, at 5.27 a.m., Flight RA-85572 stopped responding to dispatchers and went off radar screens.
During one of the briefings of the Ministry of Defence, the map showed that the plane disappeared from radar screens immediately after making a turn of 180 degrees. However, flightradar24 real time tracker did not reflect such a manoeuvre. Was the transponder turned off?

After the crash, the wreckage was scattered over an area of ​​about 10-12 square kilometers. Was it a current or an explosion? The Ministry for Transport said that the version of the terrorist act was not among the priorities. FSB officials rejected the version too.

Versions of the disaster

The basic versions of the crash are the following: a piloting error, a technical malfunction and improper alignment of cargo on board the plane. However, Tu-154 commander Roman Volkov had the total flight time of more than three thousand hours. He had made a number of flights to Hmeymim air base in Syria. Navigator Alexander Petukhov was awarded with the Order of Courage for landing an uncontrollable Tu-154 airplane in 2011.
According to experts' estimates, Tu-154 aircraft do not fall apart in the air for no reason. The plane was designed to withstand airborne loads that dramatically exceed common flight loads. The aircraft has a three-time margin of safety of all systems. Ageing and metal fatigue after replacement of spare parts is not critical for Tu-154.
The aircraft was crashing at a flight speed of about 300 km per hour, at an altitude of about 1,200 meters. If there had been an emergency on board, the crew would have reported it, even 15-20 seconds would have been enough for that, specialists said.
Many experts note that the nature of the fragments and their dispersal over long distances say speak of an explosion on board. For example, the rack chassis was found in the water. This part of the plane retracts immediately after take-off and remains in the gondola during the flight. Was there something in the gondola that caused the landing gear of the aircraft to separate?
Strangely enough, the plane belonged to the Russian Defence Ministry, and the passengers of the aircraft were not common passengers. They were actually well-known individuals in Russia. Who could plant a bomb in the plane? Was it like in Sharm el-Sheikh? The Chkalovsky airfield in the Moscow region is known as a well-protected military facility, where it is impossible to take a bomb on board a plane.
The airport in Sochi is an airport of dual use, where the level of protection is higher than at other conventional airports.
Here is an opinion from pilot-instructor Andrei Krasnoperov. "I had flown from Chkalovsky airfield to the east. There was no inspection at all, and the level of security there is much worse than at civilian airports," Krasnoperov said.
If this was a terrorist attack, it comes well into line with the killing of Russian Ambassador to Turkey. It also matches John Kirby's remarks, who said that Russia would lose more planes if it was not going to stop operations in Syria.
Noteworthy, disabled transponders and communication systems can be explained as follows. French reconnaissance ship Dupuy de Lome had entered the Black Sea on the eve of the tragedy. The ship can send a strong impulse to deactivate all electronic equipment on board the aircraft. Israel resorts to this practice against Russian airplanes in Syria. It was reported that the bodies of the victims of the Tu-154 crash were wearing life jackets. Therefore, the crew had time to warn the passengers, but not the flight control officers. In this is the case, then this is a war against NATO, rather than an act of terrorism.
There is another question: what was the need to send a military ensemble to the war-torn country, where tens of thousands of terrorists and their mentors from NATO still long for vengeance? Are we complacent about the war in Syria? Have we won and defeated everyone? One could hear it both from the president, who said that Russia was stronger than any aggressor, and from the Chairman of the Federation Council Committee on Defence and Security Viktor Ozerov, who said a few hours after the tragedy that the version of a terrorist attack was excluded.