Brussels (AFP) - France's far-right National Front stormed European Parliament polls as eurosceptic parties in several countries served up a harsh reality check for the EU on Sunday that sent shockwaves across the bloc and beyond. 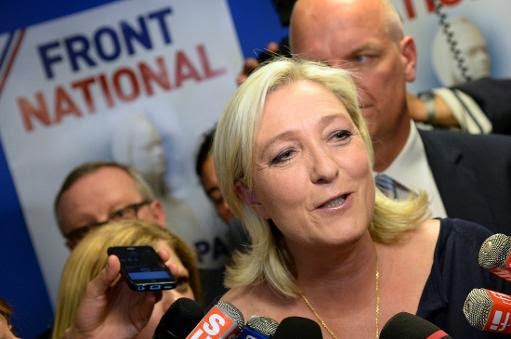 The Parliament's own projections showed the extent of the anti-EU breakthrough, with eurosceptic parties set to win 129 seats in the 751-seat assembly.

The National Front (FN) won around 25 percent of the vote in France, according to exit polls, leading the race and easily beating the centre-right UMP on 20 percent.

If confirmed, it would be the highest ever national vote garnered by the anti-immigration, anti-EU party led by Marine Le Pen who has promised to shake up the country and the EU.

"It is a historic score. We are now the first party in France," FN vice-president Florian Philippot said as senior Socialist minister Segolene Royal acknowledged that the far-right's victory was "a shock on a global scale."

Parliament's projections put the centre-right European People's Party as the single largest group in the new European assembly with 211 seats, ahead of the Socialists with 193. They held 274 and 196 seats in the outgoing parliament, respectively.

The ALDE Liberals group would be third with 74 seats, ahead of the Greens at 58 and the left GUE/NGL with 47.

There was better news for the pro-EU camp in Germany where Chancellor Angela Merkel's conservative party won 36 percent of the vote, while its coalition partner, the centre-left Social Democrats, scored 27.5 percent.

But even in the EU's most powerful member state, the nay-sayers were not totally denied.

Exit polls showed the Alternative for Germany (AfD), which calls for the dissolution of the euro, with 6.5 percent of the vote, putting it above the threshold needed to get seats in the European Parliament just a year after the party was formed.

In addition to how the parties fare, a key issue was the final turnout figures after participation hit a record low 43 percent in 2009.

Despite only a marginal increase to 43.11 percent, europhiles still hailed the turnout as a historic turning point since voting numbers have fallen in each successive election since the first poll in 1979.

But many of those voters came out to support anti-euro and anti-immigration parties who had tapped into growing voter frustration with the EU, saying Brussels has too much power and does not listen.

In Britain, the eurosceptic UK Independence Party (UKIP) led by Nigel Farage -- a party without a single seat in the national parliament -- set the scene on Thursday with a major breakthrough in local council polls, and were leading in early results on Sunday night in the European vote.

Exit polls in Denmark also suggested that the anti-immigrant Danish People's Party was headed for victory with 23 percent of the vote.

The inroads made by the anti-EU and radical parties have stoked concern they could hold Parliament hostage, working against the EU from within, but analysts say such fears may be overdone.

The EPP and Socialists would hold about 400 seats in the new assembly of 751 and traditionally the two groups have worked together for much of the time and should be able to continue to do so, they said.

The anti-EU and radical parties will have most impact at the national level and not in the European Parliament, said Erik Nielsen of Italy's UniCredit bank.

Nielsen said the "relatively strong showing of nationalists is a disturbing sign of many people feeling disenfranchised" by globalisation, especially mass immigration but the EU was the best place to address those concerns.

Faced by mounting hostility to the Brussels bureaucracy, which is seen as aloof, EU political leaders have worked hard to correct a so-called "democratic deficit".

For the first time, the five main groups in parliament named candidates to be the next head of the powerful European Commission and sent them out on the campaign trail.

They also organised televised debates between the candidates, exposing them to the harsh light of public questioning.

Summing up the hopes of reconnecting with the bloc's 500 million people, a giant banner hung at EU headquarters in Brussels read: "This time it's different -- Your vote counts."

Analysts have their doubts, however.

"The European Parliament's bid to politicise and personalise the vote has not worked," said Jean-Dominique Giuliani of the Robert Schuman Foundation.

In eastern Europe, the Ukraine crisis and fears of a resurgent Russia appear to have bolstered the attraction of EU ties and the security they offer.


In Lithuania, 44-year-old civil servant Jurate Kiserauske said the EU "is our only salvation and future. If we are not there, we would not remain where we are but we would return back to Russia, to the Soviet Union".
Posted by seemorerocks at 16:02