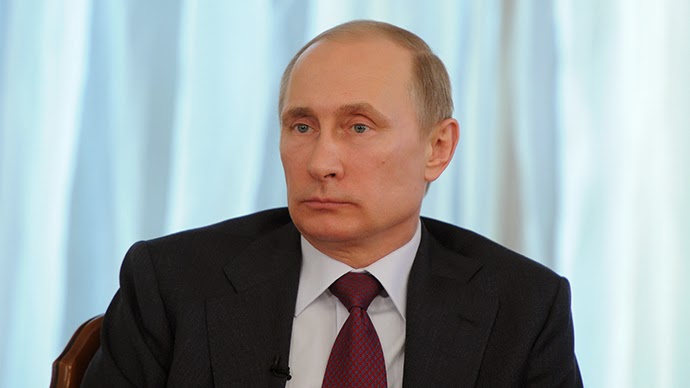 The pipeline of natural gas to Ukraine and Europe is on the verge of shutdown this morning. Putin sent letters to 18 countries demanding upfront payment for gas as Ukraine refuses to pay the price Russia wants.

In a letter sent to European leaders and seen by the Financial Times on Thursday, the Russian president said that Gazprom had a contractual right to force Ukraine to pay in advance for gas supplies and in the event of further violation of the conditions of payment “will completely or partially cease gas deliveries”.

The letter is the first time Moscow has so clearly threatened to cut gas supplies to Ukraine, a key transit route for 15 per cent of European gas consumption. It marks an escalation of economic pressure on Ukraine at a time when Kiev’s new government is already struggling to defuse a stand-off with armed pro-Russian separatists in the country’s east.

Gazprom and Ukraine have been involved in an increasingly hostile dispute in recent weeks, with the state-controlled Russian company nearly doubling the price of gas for Ukraine, a move described by Arseniy Yatseniuk, the country’s acting prime minister, as “a plan to pressure and grab Ukraine through gas and economic aggression”.

Ukraine says it will not accept the newly announced price of $485 per thousand cubic metres, while Gazprom insists that Ukraine pay off its debt.

Putin blamed European countries for Ukraine’s economic turmoil, saying that EU member states had contributed to the country’s trade deficit, while Russia had subsidised the Ukrainian economy by $35bn in the past four years through lower gas prices and unpaid fines.

Vladimir Putin is more likely to sign a 30-year deal to supply pipeline gas to China next month after more than a decade of false starts because the crisis in Ukraine is forcing Russia to look for markets outside Europe.

While Putin and President Xi Jinping will make the final decision in Beijing next month, Russia’s need for new customers means it’s pushing to complete a deal first mooted in 1997, a manager at gas-export monopoly OAO Gazprom (GAZP) and a government official said, asking not to be named because talks are ongoing. In China yesterday, Russia’s deputy prime minister said he “hoped” a deal would be signed in May.

The crisis in Ukraine has increased the importance of Russia’s relationship with China, its largest trade partner outside the European Union and the only country in the United Nations Security Council not to censure its actions in Crimea. Until a China pipeline is built, Russia has few export markets for gas outside Europe, leaving it vulnerable to sanctions and competition from U.S. exports of shale gas.

Ukraine’s pro-European cabinet accuses Russia of stoking unrest in the regions near the nations’ border in a bid to destabilize next month’s presidential election.

The Ukrainian government also says Russian bans on goods such as dairy products are politically motivated. The U.S. is providing legal advisers to help Ukraine file a complaint against Russia with the World Trade Organization, Nuland said in Washington.

The U.S. also is working with Ukraine and the European Union in an effort to limit Russia’s ability to use the threat of a natural-gas cutoff, Nuland said.


Notice the hypocrisy of the  US complaint that Russia's bans on Ukraine goods is "politically motivated".

What the heck are US sponsored sanctions if not "politically motivated". Was Obama dumb enough to believe Russia would not respond? Or did he simply not care about the consequences to Ukraine and Europe?

By now, two things should be crystal clear

Finally, the statement by Nuland regarding "reverse flows of natural gas from Slovakia, from Hungary, from Poland,” is preposterous.

The apparent answer is Russia, and Russia can cut off all gas to Europe in response.

The only thing missing in this sorry charade is more counterproductive bellowing from senator John McCain about putting missiles in Georgia.

Why, in God's name, would Putin not use the gas weapon after this - a declaration of war, no less?!