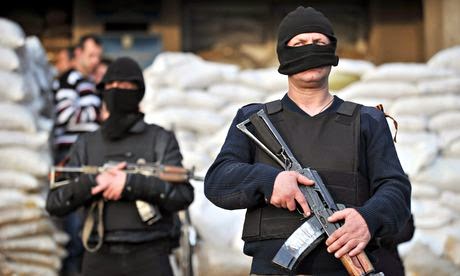 An alleged Russian colonel commanding the separatist uprising in Ukraine broke cover yesterday, and said his militia in the eastern town of Slavyansk would not release a group of EU military observers kidnapped on Friday.

Igor Strelkov – whom Ukraine's intelligence service describes as a wanted terrorist – made his first public appearance in the rebels' de facto capital. In an interview with Russian channels, he described the captured military representatives as "Nato spies". Strelkov said there was little prospect of them being freed unless Kiev's pro-western government traded them for jailed pro-Russian activists.

Slavyansk's self-proclaimed mayor, Vyacheslav Ponomarev, repeated the spy claim later, adding that an investigation into the observers was going on and could be finished soon. They were being held in "good conditions", he said. The mayor alleged they had tried to pass themselves off as "sightseers" and were not wearing military uniforms. "If the observers had been honest with us, no problem," he claimed.

The EU nationals are now being held in Slavyansk's rebel-controlled security agency building, along with other hostages. The group was operating under the mandate of the Organisation for Security and Co-operation in Europe (OSCE). It includes four Germans, a Pole, a Dane, a Swede and a Czech officer. Also taken were five members of Ukraine's armed forces.

The pro-Russian militia is also holding Ukrainian journalists, local residents and the town's elected mayor, who is allowed visits from her family and hairdresser. Another Ukrainian reporter, Lviv-based Yury Lelyavsky, was seized on Friday. The Europeans now appear to be high-value bargaining chips as the west prepares for further confrontation with Moscow.

The G7 is expected to announce an expansion of the list of Russian individuals and companies subject to sanctions on Monday. They will include close friends of Russia's president, Vladimir Putin, as well as those allegedly involved in coordinating unrest across Ukraine. The US and EU accuse Moscow of failing to implement a deal agreed in Geneva under which illegal groups would end takeovers of official buildings and give up their weapons.

On Saturday a stand-off continued between armed pro-Russian militias in Slavyansk and the Ukrainian army down the road. Ukraine's national guard established a checkpoint 20km to the north of the rebel town, on the main highway to Kharkiv. "I love my country. I'm defending it against the fascists over there," said 23-year-old soldier Andrei, gesturing towards Slavyansk.

Officers made clear they had no orders to storm Slavyansk. Instead they said their role was to prevent weapons reaching the self-proclaimed "Donetsk People's Republic".

Andrei said he had arrived at the checkpoint that morning. "We are going to win," he declared cheerfully. "We're stronger." Another soldier, lying under a blossoming tree, chipped in: "We're going to win because we believe in God. He's on our side."

Despite the threat of war, the situation in Slavyansk was remarkably calm. Traffic, including scheduled buses, flowed in and out of town, waved through tyre checkpoints by militia volunteers. One militia checkpoint proclaimed "Stop Nato" and "Love, family and peace."

"The government in Kiev doesn't want to listen to us," said Volodya, a 49-year-old electrician. "They say they're the good guys and that we are bad guys and separatists." Volodya said that when he went to school in the Soviet Union in the 1980s he learned that Stepan Bandera – the Ukrainian nationalist leader during the second world war, venerated by the west of the country – was a fascist. He called Ponomarev a "hero on the barricades".

In a press conference yesterday Ponomarev insisted that the European military observers working under the auspices of Germany's foreign ministry were engaged in espionage. He has been the face of Slavyansk's militia for the past two weeks, giving daily afternoon press conferences and updates on his latest hostages, whom he refers to as "guests". But the emergence of Strelkov – a more sophisticated figure – suggests a tweak in rebel media strategy. Ukraine's SBU intelligence agency says Strelkov is the mastermind behind the uprising. It claims he ordered the kidnapping and murder of an outspoken city councillor, Vladimir Rybak, and a 19-year-old Kiev student. Their naked bodies were found near Slavyansk last week. They had been tortured and drowned.

In his first ever interview, with Moscow's Komsomolskaya Pravda newspaper, Strelkov admitted that the pro-Russia military unit in the town was put together in Crimea. He claimed there were locals too, as well as volunteers from other parts of Ukraine. All had military experience, and were veterans of wars in Yugoslavia, Iraq, and elsewhere, he said.

Meanwhile Denis Pushilin, the self-appointed governor of the "Donetsk People's Republic", said a referendum on the region's future would take place on 11 May. It would ask one question: "Do you support the act of the proclamation of the Donetsk People's Republic?" The leadership would then decide whether to be independent or become a constituent part of Russia, like Crimea.

Eight observers from the Organisation for Security and Co-operation in Europe and several Ukrainian army personnel were seized on Friday in the city of Sloviansk. Their captors say they are NATO spies.

There are reports from Germany that the OSCE has dispatched a negotiating team to try to secure their release.

''We believe that these people should be released as soon as possible," Andrei Kelin, Russia's envoy to the OSCE, was quoted as saying.

"As an OSCE member, Russia will take all possible steps in this case," he said.
Pro-Russian leaders in Sloviansk confirmed the OSCE bus had been stopped and said they were checking the identities of those on board.

Mayor Vyacheslav Ponomaryov said at least one passenger was carrying maps showing separatist checkpoints in the area, which suggested "their involvement in espionage".

However, the separatists say they are ready to exchange them for fellow rebels who are held by Ukraine.

The West accuses Russia of leading a secessionist revolt in Ukraine's east, since it annexed Crimea. Moscow denies this.

EU diplomats will meet on Monday to discuss new sanctions against Russia. Earlier, the G7 group countries agreed to intensify their sanctions.

The United States and Kiev say Russian jets have violated Ukraine airspace. However, Russia on Saturday rejected the accusations.

"Russia's airspace monitoring systems have not registered any violations of air borders of the states adjacent to Russia, including Ukraine," a defence ministry statement said.
Posted by seemorerocks at 09:03