Buller District mayor Garry Howard says the severe weather during Easter taught a hard lesson to many residents unprepared for the storm. 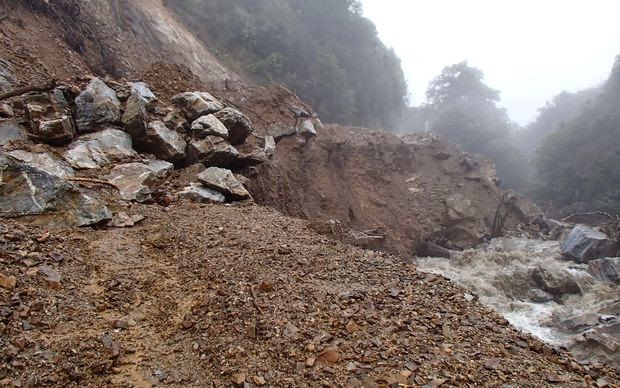 One in five homes in the South Island district has been damaged by strong gales that brought down trees and ripped off roofs.

Households and businesses remain without electricity on Tuesday and residents in a remote valley are cut off by a slip days after a major storm swept through the country. Remnants of Cyclone Ita hit much of New Zealand from Thursday, cutting power, damaging buildings and washing out roads as the Easter break began.

Mr Howard said Buller has experienced big floods and earthquakes, but the storm made people realise how underprepared they really were. A number of residents didn't have basic items such as radios, candles, batteries or direct plug-in phones.
Eighty-two households and businesses are without electricity and a further 500 in Karamea are using a diesel generator while crews repair storm damaged lines.

Meanwhile, crews using two helicopters have been fixing lines across the rugged Karamea Bluff that separates Karamea from the rest of the West Coast.
Buller Electricity chief executive Erik Westergaard said homes and businesses were being powered by a diesel generator on Tuesday but hoped to have electricity restored by Wednesday.

Up to 60 homes and other buildings on the West Coast have had roofs torn off or badly damaged and about 10 of those will have to be demolished.

Grey District mayor Tony Kokshoorn said the council would work with insurance companies to make sure people with storm-damaged property get help quickly.
Mr Kokshoorn told Radio New Zealand's Morning Report programme the cleanup could cost up to $20 million but as the region is still assessing the damage, it is not asking for Government help at this stage.

In Tasman District, eight residents in Graham Valley inland from Motueka remained isolated on Tuesday after the severe weather caused part of the road into the area to be taken out by slips. The council said it could be a week before access is restored, but the residents are self sufficient.

One of the stranded property owners, Karsten Schroeder, told Radio New Zealand's Morning Report programme on Tuesday the road had been blocked twice in the past three years, so they were prepared, and the main thing now is to get walking access. He said two neighbours' hydro power systems were knocked out and they are relying on generators.

The chair of community development for Tasman District Council, Judene Edgar, said eight properties were cut off and supplies were sent in by helicopter on Monday including diesel for generators.

Many farms on the South Island's West Cost sustained severe damage in the storm. Dairy farmer and Federated Farmers' adverse events spokesperson, Katie Milne, said she had never experienced a storm so widespread and vicious in the area.

"We've got hay barns without roofs or completely flattened, some cow sheds have sustained some damage and of course lots of trees down."

Christchurch residents also had a miserable start to Easter, as flooding and slips closed roads across the city, while broken water pipes left parts of Lyttelton without a water supply.

Fifteen streets near the city's port were affected and the council had been providing water from a tanker in London Street. There was also flooding in the suburb of Mairehau, which was also badly flooded last month.

Mairehau resident Julie Cairns said her property has flooded four times now, the latest being as a result of the storm.

Christchurch mayor Lianne Dalziel said she had asked for reports on the level of damage caused to areas such as Heathcote where streets were left covered in mud.

Ms Dalziel said a timeline for the decision-making process for flood remediation works in Mairehau will be announced on Thursday.

Some 34 homes in Whakatane and Opotiki were damaged as floodwater took silt through houses. Chief fire officer Ken Clark said there was also some sewage contamination and it would be end of the week before homes are completely cleaned up.