Three Ukraine elite Alpha group agents captured in Donetsk region
Three members of Ukraine’s special anti-terrorist unit Aplha have been detained during a covert mission in Donetsk region, amid the buildup of Kiev’s military near the cities controlled by pro-federalization forces. 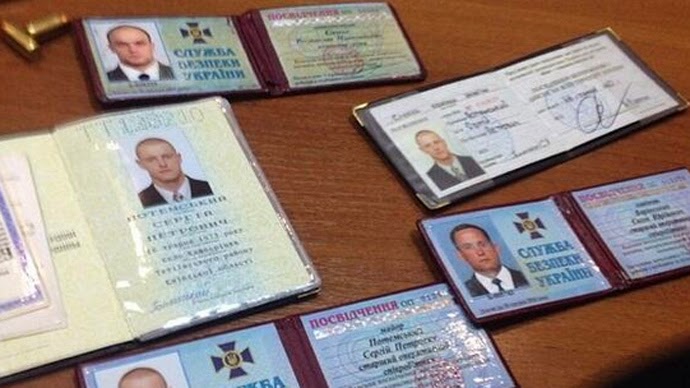 Commander of the “Donetsk Republic” self-defense forces, Igor Strelkov, has confirmed reports that three members of the Alpha special tactical assault group of the Ukrainian Security Service (SBU) have been detained in the city of Gorlovka, in Donetsk region.
Their task reportedly was to abduct one of the self-defense force leaders, Igor Bezler, whose group is controlling the local police department in Gorlovka, but instead they were captured themselves. The prisoners were searched and blindfolded and brought to nearby Slavyansk, where their guns, documents and IDs as well as other belongings were demonstrated to the media during a press conference.
During questioning, the detained officers revealed that a special unit that has infiltrated the city comprised of seven men.

The captives claimed they had no time for any wrongdoing as they “just arrived” in the city and were getting acquainted with it and investigating approaches for fulfilling their mission, which they admitted was “invariably impossible.”
They did not say however who authorized the operation and was in control of it. They also did not tell where the rest of the group went after they split, or how many similar groups could be operating in the region.
One of the detainees hinted that they were afraid for the wellbeing of their families. “If I did something wrong,” he said, “I think nothing good would happen to my family.” Although there were no direct threats to their families, he said that was because the “mechanism was not launched” as they were abiding by orders.
The members of the Ukrainian armed forces will now receive the status of prisoners of war, Strelkov said, after which an attempt will be made to exchange the commandos for members of pro-federalization activists detained by Kiev. 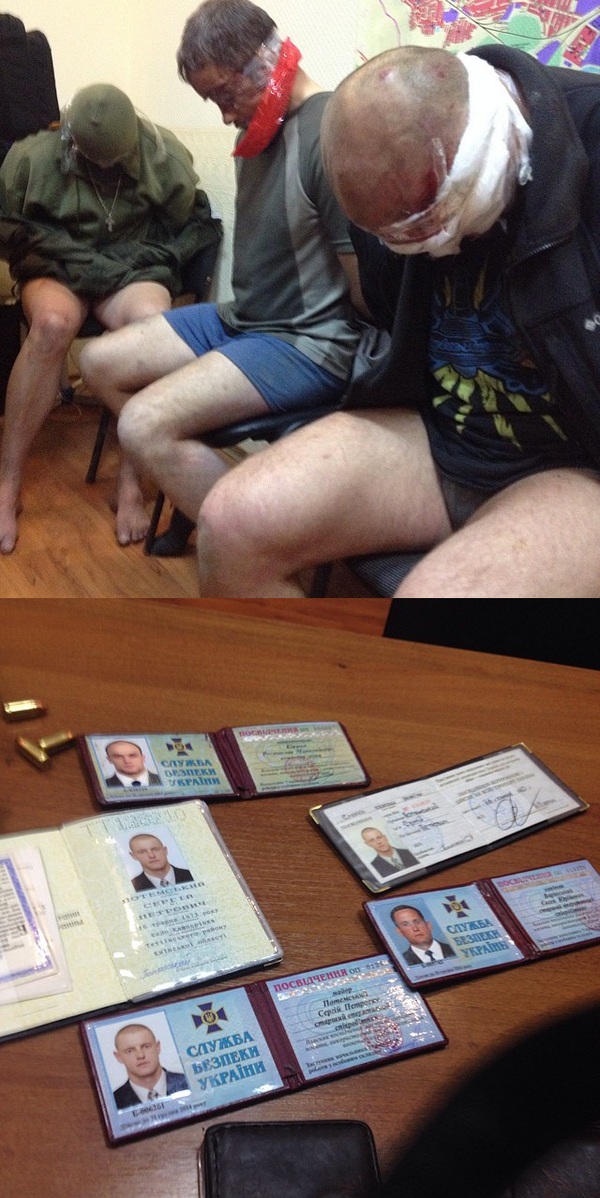 The agents’ capture came amid an attack on a checkpoint near the neighboring Soledar city, where a group of unidentified gunmen was flown-in by a helicopter and in a blitz attack captured one of the self-defenders, forcing others to temporary retreat.
Earlier on Friday, self-defense forces in Slavyansk detained eight foreign military observers, which they are calling “NATO spies.” At the time of the detention the “people’s mayor” of Slavyansk, Vyacheslav Ponomaryov said, the group had “cards with marks of all checkpoints” which he says “serve as proof of their intelligence activities under the guise of the OSCE mission.”
The detained team is indeed “not OSCE monitors” as widely reported, but instead was sent by OSCE member states in accordance with the 2011 Vienna Document on military transparency, the organization explained on Friday.
Despite the plea from Moscow and the international community to release the four Germans, a Bulgarian, Czech, Dane and a Pole, Ponomaryov has not acceded to the request yet, as he has not rule out that the group could be used in prisoner exchange for anti-government activists, dozens of whom have been arrested by Kiev's coup-installed authorities over the last month 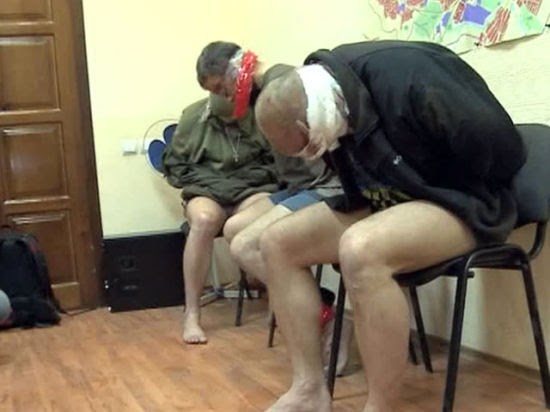 Vineyard of the Saker,
27 April, 2014
RT is reporting that 3 officers of the most elite anti-terrorist unit in the Ukraine, they are called "A" or "Alpha", were caught in the city of Gorlovka, near Donetsk. Read the full article and watch the video of their interrogation by reporters here.
Now let me provide some context here.
The Ukrainian SBU is a truly frightening secret service. Ever since it's foundation following the independence of the Ukraine the SBU did some work arresting gangsters and criminals, but it's most feared mission was to be the "enforcement" service of whoever was in power. The top of the top of the SBU forces were supposed to be the "A" or "Alpha" anti-terrorist forces. It is rather cute that the proudly independent Ukies felt the need to use the same designation as the hated Moskals whose famous anti-terrorist group is called "A" (the Alpha thing is a media invented misnomer and an attempt to sound like the US "Delta" Force; in reality the group is called "the A Directorate"). Anyway, they call have the same name, but in terms of skills or record the two groups are very different. For one thing, the Russian "A" never was the enforcement service of the regime and they had no political role or mission at all. Second, they really did deal with anti-terrorism and very serious organized crime.

Still, by Ukrainian standards, these are the top of the top. These are also the folks who have been kidnapping anti-regime activists over the pasts months. I have to note that the previous commander of the Ukrainian Alpha was sacked for refusing to engage in operations against the Russian-speaking population - so there were some honorable officers in this group. But by now it is pretty clear who stayed. And they mission was typical too: to kidnap the head of the local police department.
The hunters became prey
Instead, the three wannabe kidnappers got caught themselves.
The three captured today were lead by a Lieutenant-Colonel, no less. For the Russian militias to have detected, intercepted and captured three undercover Alpha officers is already fantastic, but to catch an Alpha Lieutenant-Colonel is nothing short of miraculous. It is also a testimony of the absolutely unique level of gross incompetence of the Ukrainian security service to have such a high ranking operative caught.
It is also highly ironical.
For days the regime in Kiev was reporting that it caught GRU (Russian military intelligence) officers here, then there, then again over there. They were never shown, of course. At the GRU HQ in Moscow they laughingly declared that by now the Ukies had caught so many GRU officers that the entire GRU personnel was now in captivity and the GRU offices empty. So imagine the pain and embarrassment in Kiev when they found out the self-organized militias of a small town near Donetsk managed to capture 3 Alpha officers alive, including a Lieutenant-Colonel.
The video shows them pretty well-banged up - they did resist being captured - and completely despondent. All three clearly realize that their screwup deserves to be listed in the Guinness Book of Records under the "amazing incompetence" heading.
The past 24 hours have been a disaster for the junta in Kiev: first a group of spies pretending to be with the OSCE got caught, and now 3 Alpha officers are also captured.
Except attacking a few checkpoints and stealing its food and medicines, the junta forces have so far totally failed to achieve anything. The single most feared segment the junta's security and enforcement apparatus was the SBU, which is also the best equipped and best trained. And then this.
I wonder what else could go wrong? Will a US national working for the CIA be captured wearing a silly wig? Or maybe a junta official like Avakov or Taruta?
Let's just hope that nothing terrible happens tomorrow as the regime might try something "macho" to save face, like Reagan did in Grenada (arguable the worst military operation in modern history, by the way).
Stay tuned. Kind regards and good nite,