In these difficult days it is important to come back to the heart and what better way than through our relationship with our animal friends.

I dedicate this to the memory of Michael Ruppert who embodied the highest qualities of humans as well as some of the more painful and afflicted - but who, above all loved the whole of creation - first and foremost, the animals in his life 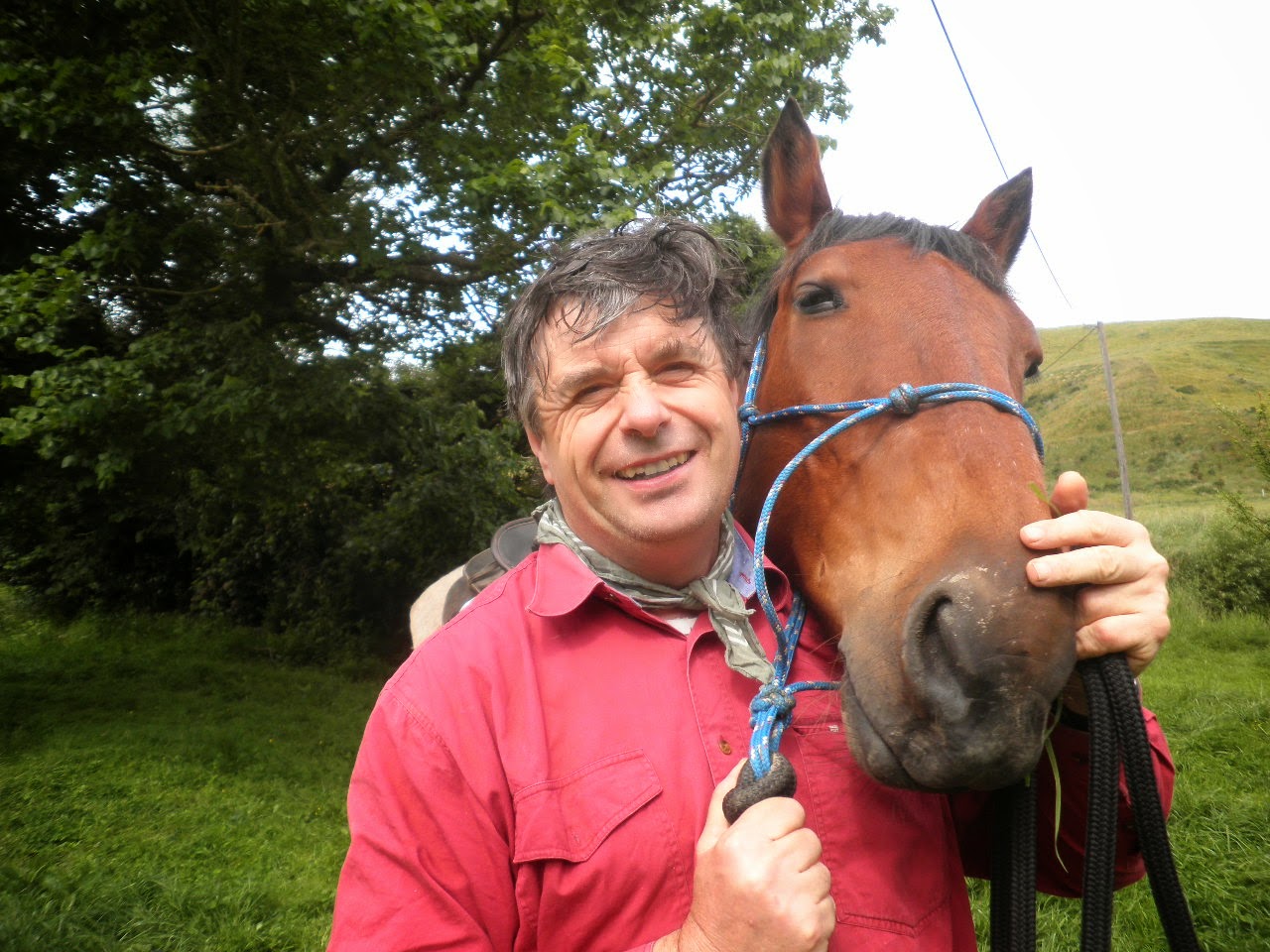 What I like about Robin is, although he does silly things he is always ready to learn.

Let me tell you.

A while ago he took me somewhere in the big box with my wife Poppy. We were offloaded and Poppy was put in a pen and I was taken off for what they call a 'lesson' (imagine that!).  Poppy called out to me and I called back. I was feeling very restless but the "teacher" wanted me to stand still while Robin got on.

Every time I moved off I was made to do turns on my hindquarters - something I had always done with pleasure to please Robin. But this was punishment.

I was even told I was a bad horse by the man.

After that I wasn't going to do those circles again. Not until Robin learnt a thing or two from me.

I refused and kept refusing until the day Robin got it (those humans are such slow learners!).

He touched me with his leg and touched the rein on one side. To reward him I did what he wanted, and since then he has tried to be gentle with me.

Later on - after Poppy rejoined the horse spirits - we were riding out in the hills. I had to  shift my weight and Robin lost his balance and the thing that holds the saddle in place snapped and Robin was catapulted  onto the ground.

He was badly hurt - I knew that . Once I shook the saddle off I walked off a little way to regain my composure - and have some grass.

Somehow Robin got up and led me down the hill.

He had a broken arm so we didn't go out for a long time.

I hate it when humans lie to themselves, so I showed him that it was simply impossible. He brought out the saddle and tried to put it on me. There was no way he was going to get that thing on me!

Luckily he got the message and he fed me and returned me to the herd. 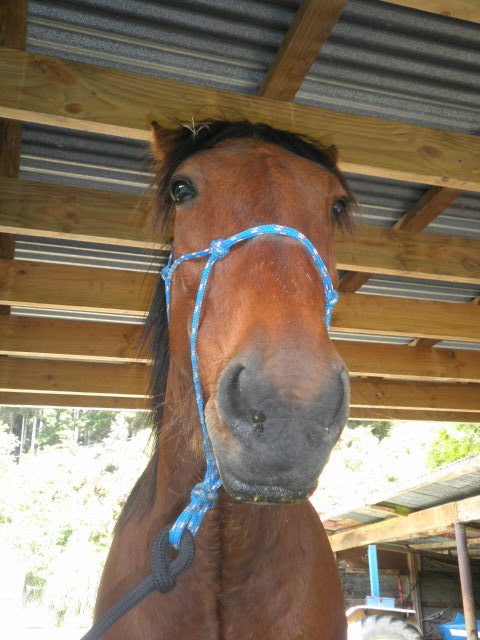 Once I got to know Biscuit (and myself), I have tried to find a different relationship with my horse - one based on partnership and not on fear or force.

He has taught me so much about communication and softness.

In return I have been able to offer something to Biscuit.

From a nervous and inconfident horse he has come into his own - he has become a dominant in the herd and happy and confident in himself.

As a standardbred pacer he came with an impediment. In short he had to learn to run freely and to move his feet in a coherent way.

I have been able to demonstrate to him, with fairly minimal help of other natural horsemanship trainers that he can do things that he couldn't  do previously.

His pride in himself when now he rotates freely on his hind quarters or does half-passes, is palpable. He thinks (and is) he is a fine fella!

I have been strongly indebted to what I have learnt (from afar) about softness and partnership from Mark Rashid.

More recently my partner Pam and I have learned a lot from attending workshops with trainer, Steve Halfpenny from Adelaide, Australia.  Formerly a level 3 Parelli  trainer he has now fully embraced the Vaquero tradition of horsemanship, from which most contemporary natural horsemanship in America, is descended.

Here is Steve and his quarterhorse, Gandalf - both in the process of learning from each other

This video is of Steve Halfpenny riding his Palomino Quarter Horse gelding during the courses that Jeff Sanders conducts at our centre each year. Gandalf is being ridden in the Two Rein in the old California Vaquero style. He is just in the Two Rein and will remain in it until he can do all the manoeuvres in a calm relaxed way before moving on to the bridle

When I started off with all this there was very little on the net about this traditional style of riding (that traces its origins back to Spain and working with cattle).  When I looked today there are lots and lots of videos with demonstrations and lessons.

Buckaroo Man on the Internet

Just to whet your appetite here are a couple more videos

Robin and I used to get out for many adventures, sometimes in the hills - first with Poppy, and then with my new partner, Lucy.  Sometimes we took part in competitions - competitive trail riding in places a long way from my paddock. 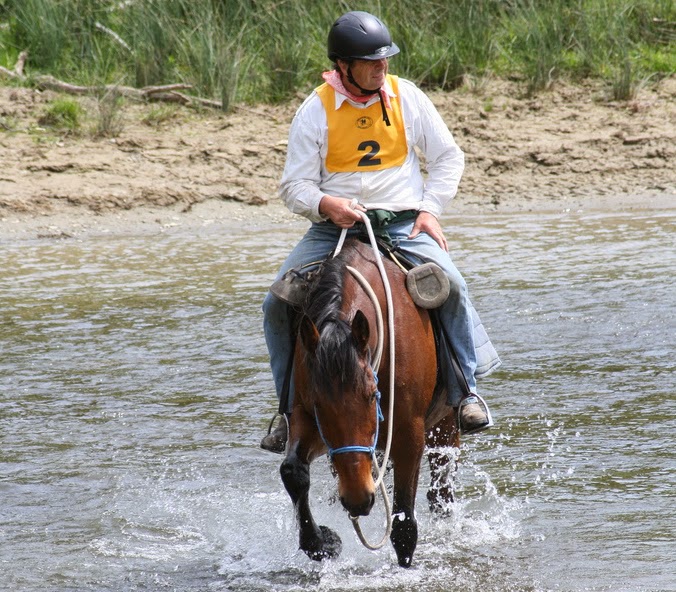 That meant getting into the big box, (which is not something I feel that great about) and travelling long distances.

It was always worthwhile.

Those days have passed but I still spend many happy hours with him and Pam. Robin is always happier with me than he is when he arrives.

I love to see him happy.

For a while it affected my own muscular system.

Whereas previously I had practised and taught yoga, from doing the full lotus position, padmasana, I can no longer sit cross-legged on the ground.

From several day tramping trips (trekking) in the forests and mountains I now rely on my partner Pam to make the trek up the hill to fetch the horses.

I have sometimes found it difficult to mount Biscuit, to swing my leg over into the saddle and have had to give up in frustration.

Biscuit has shown all the signs of understanding my predicament and has shown much patience, standing still while I make efforts to get on his back.

It's always worth the effort because once on I become a different human being and we can enjoy time together and practise some of the things that he has taught me and that I have demonstrated to him that he can achieve that he couldn't before.

He has become, all at once, my therapist and enabler who makes things possible.

I would like to end with this song performed in Ireland by my cousin Hayley with 'Celtic Woman'.