Here Come The Boots On The Ground: US Troops Heading To Eastern Europe 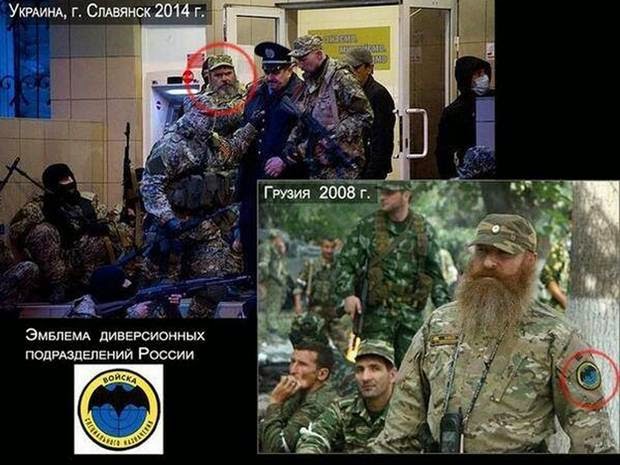 It seems the truce "deal" is well and truly dead...
The question now, of course, is - what will Putin do in response to this action?
As for where these troops may be arriving from the answer is simple: that other US military intervention success story - Afghanistan. From Reuters:


The number of U.S. troops in Afghanistan may drop well below 10,000 - the minimum demanded by the U.S. military to train Afghan forces - as the longest war in American history winds down, Obama administration officials briefed on the matter say.

Since Afghanistan's general election on April 5, White House, State Department and Pentagon officials have resumed discussions on how many American troops should remain after the current U.S.-led coalition ends its mission this year.

The decision to consider a small force, possibly less than 5,000 U.S. troops, reflects a belief among White House officials that Afghan security forces have evolved into a robust enough force to contain a still-potent Taliban-led insurgency. The small U.S. force that would remain could focus on counter-terrorism or training operations.

That belief, the officials say, is based partly on Afghanistan's surprisingly smooth election, which has won international praise for its high turnout, estimated at 60 percent of 12 million eligible votes, and the failure of Taliban militants to stage high-profile attacks that day.

The Obama administration has been looking at options for a possible residual U.S. force for months.

"The discussion is very much alive," said one U.S. official who asked not to be identified. "They're looking for additional options under 10,000" troops.

There are now about 33,000 U.S. troops in Afghanistan, down from 100,000 in 2011, when troop numbers peaked a decade into a conflict originally intended to deny al Qaeda sanctuary in Afghanistan after the September 11, 2001, attacks.

Of course, it would be peak irony if the next country Russia decides to destabilize is none other than its old "buddy" Afghanistan, which lately appears far more amicable toward the Kremlin than the White House. It certainly would be an additional egg in the face of US foreign policy if Aghaniitan - so critical to the US controlled heroin trade - were to show a return to some of its Taliban roots for which it is so well-known.

“To promote peace and stability in the region.” - sounds like old Soviet rhetoric.

US frigate USS Taylor (FFG 50) has entered the Black Sea, according to the US Navy, as the Pentagon announces plans to dispatch some 600 troops to Poland, Lithuania, Latvia and Estonia for military exercises. 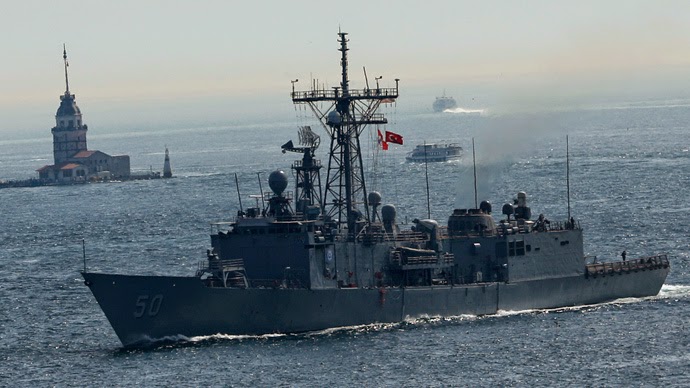 The US claims the ship’s entry is “to promote peace and stability in the region.”

“The US Navy routinely operates ships in the Black Sea consistent with the Montreux Convention and International Law. Taylor's mission is to reassure NATO allies of the US Navy's commitment to strengthen and improve interoperability while working toward mutual goals in the region,” read a US Navy statement released on Tuesday.

Russian Foreign Minister Sergey Lavrov has previously stated that the US has been violating the Montreux Convention which restricts the number of US vessels operating in the Black Sea and sets a time limit of 21 days for each one.

At the beginning of February, the USS Taylor was initially posted in the Black Sea. However, damages to the warship’s propeller assembly after running aground in the Black Sea caused a spike in tensions between the US and Russia after it caused the ship to exceed the time allotted to its stay by 11 days. 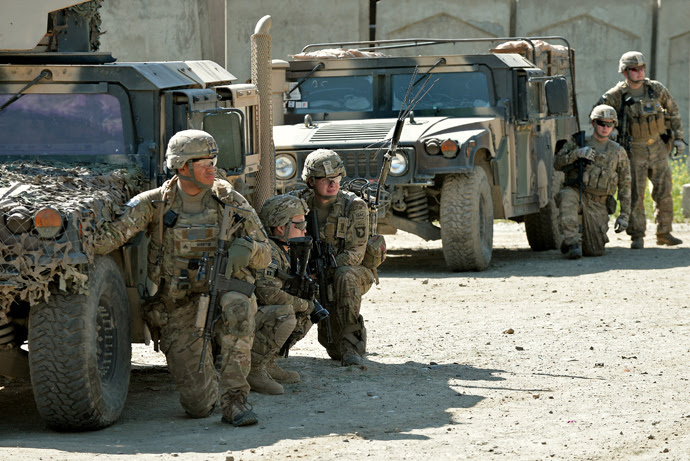 US soldiers of the Airborne Division (AFP Photo / Manjunath Kiran)


The 600 troops are to be sent to Poland and the Baltic states in the coming days in order to offer support to NATO allies which have expressed concern following Crimea’s accession to Russia, the Pentagon stated on Tuesday.

Kirby pointed out that the bilateral exercises were a supplement to the standard military exercises which the countries undertake together and were because of current events in Ukraine.“The United States takes seriously our obligations under Article 5 of the NATO alliance, even though these aren't NATO exercises,” Kirby said. “It's a very tangible representation of our commitment to our security obligations in Europe.”

Last Friday, Poland’s Defense Minister, Tomasz Siemoniak, said that this week Poland and the United States would be announcing the dispatch of ground forces to Poland take part in a two-week land-forces exercise. Some 150 soldiers from the 173rd Airborne Brigade Combat Team based in Vicenza, Italy are to begin the exercises in Wednesday after which similar exercises will follow in the Baltics.

US troops will rotate in and out of all four countries. “We’re looking at trying to keep this rotational presence persistent throughout the rest of this year,” Kirby stated, adding that exercises could potentially expand into other countries.

The measures are being taken as part of a stepped-up effort announced last week by US Defense Secretary Chuck Hagel in order to reassure NATO allied states.

Relations between Russia and the West became strained after an armed coup in February deposed President Viktor Yanukovich following months of protests. Moscow considers the events to have been orchestrated by the EU and the US and does not recognize the post-coup authorities as legitimate.

Ukraine's acting president has called for the resumption of military operations against pro-Russian separatists in the east of the country, claiming two of his party's supporters had been "tortured to death", in a further blow to an unravelling international peace plan.

Oleksandr Turchynov said "counter-terrorist" operations in the region, suspended as part of the peace agreement in Geneva last Thursday, should restart after the bodies of two men, one a pro-Kiev politician, had been found near the rebel-held town of Slavyansk. 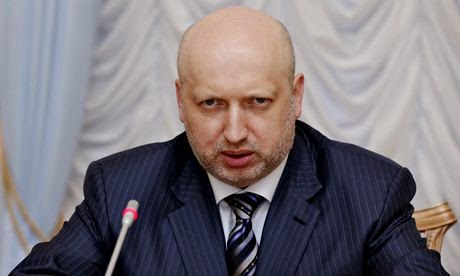 The politician has been named as Vladimir Rybak, a town councillor and member of the Batkivshchyna party, who went missing on 17 April.

"The terrorists who effectively took the whole Donetsk region hostage have now gone too far, by starting to torture and murder Ukrainian patriots. These crimes are being committed with the full support and connivance of the Russian Federation," Turchynov said, hours after a joint appearance with the US vice-president, Joe Biden.

The country's defence ministry also reported that one of its observation planes had been struck by gunfire from Slavyansk, one of the areas of greatest tension in the eastern region. The plane landed without injuries, the ministry added.

Turchynov's call to relaunch army operations came on a day when international monitors reported a worsening in the security situation in separatist-held eastern districts, while the US and Russia blamed each other for the continuing unrest.

Biden flew to Kiev to offer the Ukrainian government economic support and tell Moscow it was "time to stop talking and start acting". In response, Russian foreign minister Sergei Lavrov said the onus was on Washington to rein in the authorities in Kiev, which he said had been brought to power by the US and was responsible for "outrages".

Western officials acknowledged that the Geneva plan – agreed on Thursday by the US, Russia, Ukraine and the EU – was clearly in trouble, but the US and the EU put off a decision on imposing new sanctions on Russian leaders, hoping diplomacy could somehow be salvaged in the new few days.

"The negative rhetoric we have seen coming from Moscow is not what we expected from Russia, but we are going to give some time to this, while we make it clear to Russia there needs to be movement," a western diplomat said, adding that a further Geneva meeting to narrow differences could not be ruled out.

On the ground, the Organisation for Security and Cooperation in Europe (OSCE), tasked with monitoring and helping implement the Geneva plan, reported very little progress over the weekend towards two of its main goals: disarming rival groups in eastern Ukraine or ending the occupation of public buildings by pro-Moscow militias.

Meanwhile, the OSCE said the security in the most troubled areas was getting worse. An American journalist working for Vice News, Simon Ostrovsky, was reported to have been held by the separatists running Slavyansk, on the orders of their leader, the self-styled "People's Mayor", Vyacheslav Ponomaryov.

Amid a growing number of reports of abductions, arrests and disappearances, the head of the OSCE mission, Ertugrul Apakan, called for pro-Russian separatists to release the chief of police in the eastern town of Kramatorsk, Colonel Vitaliy Kolupai. "The OSCE monitors talked to witnesses who were able to confirm reports that armed individuals who called themselves supporters of the so-called 'Donetsk Republic' entered the premises of Kramatorsk police department and abducted its head Colonel Vitaliy Kolupai who is being kept against his will," the Vienna-based organisation said in a statement.

The OSCE added that because of "unpredictable security risks", its observers had been unable to reach the site of a shooting on Sunday morning in another separatist-held town of Slavyansk, in which at least three people were reported dead. Moscow and its supporters in the region blamed Ukrainian rightwingers. Kiev blamed Russian military intelligence.

The OSCE mission called the incident "a worrying deterioration of the situation" and said Slavyansk had become a no-go zone. "The security situation is assessed as deteriorating, and operating conditions for OSCE teams are marginal," it said.

Elsewhere in the region, the 150-strong monitoring team "did not find any indications that the Geneva statement was starting to be implemented in the Luhansk region" where pro-Moscow activists refused to move from government buildings they have been occupying for two weeks and instead announced a two-stage referendum on independence from Ukraine and union with Russia. In Donetsk, the OSCE reported that "occupation of state institutions was ongoing".

Vice-president Biden arrived in Kiev with offers of an extra $8m in non-lethal military assistance for the Ukrainian armed forces, including bomb-disposal equipment, communications gear and vehicles. He also pledged $50m (£30m) to help Ukraine's government to carry out political and economic reforms, including $11m to help conduct the presidential election on 25 May, but said the acting leadership must "fight the cancer of corruption that is endemic in your system".

Link to video: Joe Biden pledges support to Ukraine and issues warning to Russia
Speaking in Kiev, Biden called on Russia to persuade its supporters in eastern Ukraine to disarm and to pull back troops from the Ukrainian borders.

"We've heard a lot from Russian officials in the past few days. But now it's time for Russia to stop talking and start acting," he told a news conference. "We will not allow this to become an open-ended process. Time is short in which to make progress."

Lavrov, however, shrugged off the US pressure, and argued that it was the US-backed government in Kiev that was destabilising the situation.

"Before putting forth ultimatums to us, demanding fulfilment of something within two-three days or otherwise be threatened with sanctions, we would urgently call on our American partners to fully recognise responsibility for those whom they brought to power and whom they are trying to shield, closing their eyes to the outrages created by this regime and by the fighters on whom this regime leans," Lavrov said.

Chillingly reminiscent of past CNN lies

The good name of Crimean Tatars has been restored. The ethnic minority was among those deported from the region by Stalin, who suspected them of Nazi collaboration. But Russia's now legally guaranteeing a return of their rights. As Alexey Yaroshevsky reports - only now are the cries of persecution finally fading.

Posted by seemorerocks at 15:06