With the ever-more certain approach of El Nino, the world ocean surface is starting to radiate more and more heat.
Over the past four days, GFS assessments have shown positive temperature anomaly values in excess of +1 degrees Celsius (C) above the, already hotter than normal, 1979 to 2000 average (which was, itself, about .5 C above the low averages seen during the period of 1880 to 1920). With each new dawn, readings ramped higher and, by today, those temperatures had spiked to an extraordinary +1.12 C hotter than ‘normal’ for the entire global ocean system. 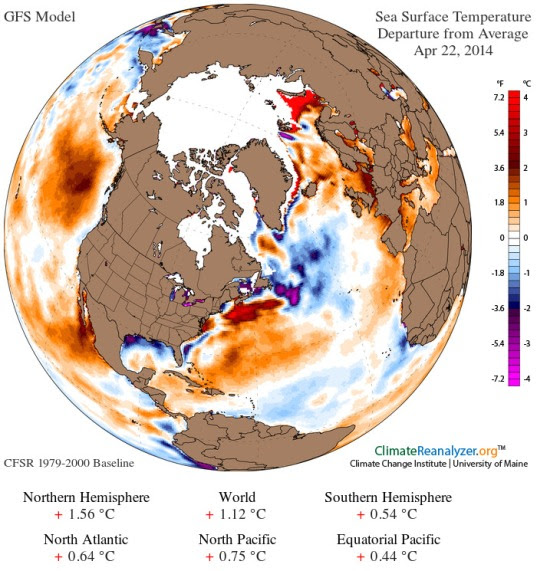 (Global oceans hit extreme +1.12 surface temperature anomaly. Data from NOAA’s Global Forecast Systems model visually depicted by the University of Maine’s Climate Reanalyzer.)
The equatorial Pacific region hovered near El Nino values with readings of +.44 to +.45 C approaching the El Nino threshold of +.5 C. It is worth noting that the Eastern Equatorial Pacific has consistently shown below average temperatures during recent years as strong trade winds drove both upwelling of cooler waters and atmosphere-to-ocean heat transfer. Meanwhile, the Western Pacific spiked to much hotter than normal readings as heat content just kept piling up in a broad zone east of the Philippines.
Extraordinary high temperature departures have also cropped up across other regions. The Northern Hemisphere, for example, showed an extraordinary +1.56 temperature anomaly for April 22. This exceptional reading was fed by extreme northern ocean temperatures in the Barents Sea above the Arctic Circle at +4-5 C above the 1979 to 2000 average and a very warm pool in the Pacific Ocean south of Alaska ranging from 1.5 to 2.5 C hotter than normal.
Aside from these zones of extreme heat, almost all Northern Hemisphere waters now display hotter than average temperatures.
All Australian Models Now Show El Nino
These excessively high global ocean temperature readings come on the same day that the Australian Bureau of Meteorology (BOM) issued new findings showing that every climate model run by that agency now predicts El Nino for 2014. The BOM notes:

The likelihood of El Niño remains high, with all climate models surveyed by the Bureau now indicating El Niño is likely to occur in 2014. Six of the seven models suggest El Niño thresholds may be exceeded as early as July.

At issue is the fact that reversals of the trade wind, known as west wind back-bursts (WWB), are currently ongoing both east of the Solomon Islands and in the Central Pacific Ocean. Real-time observation of western Pacific wind flow through composite weather model data shows a broad field of westerly winds of about 5-15 mph velocity centered at 1.7 degrees South, 156 degrees East. A second cyclonic circulation north of Tahiti at 2.9 North, 139 West in the mid Pacific Ocean has also generated a 5-15 mph west wind.
Overall, these counter trade wind flows help to push down-welling warm water in the Western Pacific eastward, spreading hot waters across the surface and amplifying the force of what, during March, was the most powerful Kelvin Wave on record. Factors that bring with them the potential for an extraordinarily powerful monster El Nino for 2014-2015, continued positive ocean surface temperature extremes, and major weather disruptions associated with both human warming and the global tilt toward the warm extreme that is El Nino.

(Very powerful Kelvin Wave still moving eastward even as it begins to sink in off the coast of South America. Image source: NOAA.)

Likelihood for a significant El Nino later this year continued to increase as the most powerful Kelvin Wave on record continued its progress into the Eastern Equatorial Pacific. According NOAA’s recent April 13 assessment, the massive slug of anomalously hot Pacific subsurface waters continued to surge eastward, to deepen the 20 C isotherm and to spread out on or just below the surface.
NOAA’s most recent CPC report finds, in a bald refutation to assertions by climate change deniers, that:

A significant downwelling oceanic Kelvin wave that was initiated in January greatly increased the oceanic heat content to the largest March value in the historical record back to 1979 and produced large positive subsurface temperature anomalies across the central and eastern Pacific.

Extraordinary temperature departures in the range of 4-6 C above average stretched from a zone from 180 West Longitude to 80 West Longitude and ranged in depth from 30 to 70 meters. This very large zone of above average heat shattered global records even as it slid into position to begin re-delivering that excess to the atmosphere.
Perhaps more importantly, the nose of this wave of far warmer than normal water had begun to sag, pushing the 20 C isotherm deeper into the Eastern Pacific even as cooler water from the depths began to punch into the tail of the record hot Kelvin Wave, raising the 20 C isotherm in the Western Pacific. This downwelling force of a monster Kelvin wave appears to just now be initiating the start to a global weather-altering El Nino.
Hot Water Downwelling, Weakening Trade Winds

In the East, from 12 February to 13 April, the 20 C isotherm had plunged from about 25 meters below to around 100 meters of depth. During the same period, the isotherm from about 150 East Longitude to 170 West had risen from about 210 meters to 170 meters. At the subsurface, a continued rising of the isotherm in the West and its continued fall in the East would complete the transfer of warm waters across the Pacific and open the flood gates to the start of what could be an extraordinarily strong El Nino event as what is now a record Pacific Ocean heat content starts bleeding back to the atmosphere.

(20 C isotherm continues to rise in the Western Pacific [left side of graph] even as it rises in the East [right side]. Image source: NOAA.)

On the surface, trade wind weakening and reversals continued with a significant, though milder than those seen in January and February, backflow emerging in early April east of the Solomon Islands and coinciding with rather weak trade winds across the Equatorial Pacific. Such conditions continued to provide surface impetus to transfer warm waters  across the Pacific even as record subsurface heat continued its transition eastward.
Chances for El Nino Rise

Accordingly, predictive forecasts both by NOAA and Australia’s Bureau of Meteorology are showing increasing potentials that El Nino will emerge. NOAA’s forecast now indicates that the chance for El Nino has jumped to over 50% by this summer and to 66% by the end of the year. Australia’s forecast is now showing a greater than 70% chance of El Nino over the same period.
In addition, El Nino type influences are already beginning to appear in world weather systems. A recent report by Dr. Simon Wang found that precursor El Nino conditions combined with effects related to climate change such as Arctic sea ice loss to spur and enhance epic drought conditions in California. Southeast Asia is already experiencing heat and dryness that is typically associated with a developing El Nino. Northern Brazil is also seeing increasing levels of heat and drought. To the North, Siberia is experiencing an extraordinary April onset to fire season while the northeastern US is somewhat cooler than average due to the persistent and anomalous strength of a dipole of warm temperature extremes in western North America and cool temperature extremes in eastern North America.
Many of these impacts, though expected in a normal El Nino year appear to be enhanced by effects related to human caused climate change such as sea ice loss and an amplification of the hydrological cycle increasing the frequency of extreme rainfall, drought and fire events (as in the California drought and the southeast Asian and Siberian fires).

During a typical strong El Nino year, global weather disruptions can cause severe damage resulting in reductions to world GDP by as much as 5%. But with the added and enhanced severe weather effects due to climate change interacting with El Nino, overall impacts could be far more destructive. In addition, a release of what is currently record Pacific Ocean heat content into the atmosphere will likely set off new high temperature extremes, further pushing the global climate system toward the very dangerous 2 C warming threshold.
Links:
NOAA
CPC/IRI
Climate scientists find link between sea ice loss, emerging El Nino, and record California Drought
Small Army of Firefighters Battles Siberian Blazes in April
Monster El Nino Rising From the Depths