"You could say [that] climate change closed Mt. Everest this year,"

The Year Climate Change Closed Everest
As the world heats up, the Himalayas are becoming more volatile. 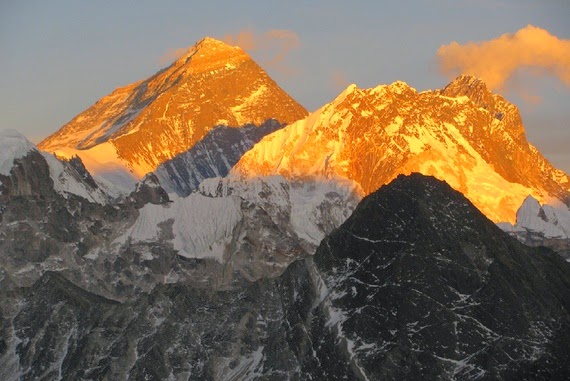 
The deadly avalanche on Everest earlier this month wasn't technically an avalanche. It was an "ice release"—a collapse of a glacial mass known as a serac. Rather than getting swept up by a rush of powdery snow across a slope, the victims fell under the blunt force of house-sized ice blocks tumbling through the Khumbu Icefall, an unavoidable obstacle on the most popular route up Everest. The worst accident in the mountain's history has effectively ended the 2014 climbing season. And some see global warming as the key culprit.

"We need to learn more about what is going on up there. Each day we sit and listen to the groaning and crashing of the glacier."

"I am at Everest Basecamp right now and things are dire because of climate change," John All, a climber, scientist, and professor of geography at Western Kentucky University, told me by email. "The ice is melting at unprecedented rates and [that] greatly increases the risk to climbers."

"You could say [that] climate change closed Mt. Everest this year," he added.

Climbers had warily eyed the serac that collapsed on April 18 for years. In fact, a major expedition outfitter canceled its climbing season in 2012 because of it—a decision vividly reconstructed by Jon Krakauer in The New Yorker last week:

For many years, the most lucrative commercial guiding operation on Mt. Everest has been a company called Himalayan Experience, or Himex, which is owned by a New Zealand mountaineer named Russell Brice. In the spring of 2012, more than a month into the climbing season, he became increasingly worried about a bulge of glacial ice three hundred yards wide that was frozen tenuously to Everest’s West Shoulder, hanging like a massive sword of Damocles directly over the main route up the Nepal side of the mountain.

Ice frequently falls from this hanging glacier on the West Shoulder, and traversing the Icefall has always been treacherous. "Ice doctors" who install ladders and ropes in the area have long adjusted and readjusted the infrastructure in response to the collapses, big and small, that occur there on a daily basis. But experts believe these dangers are multiplying as average temperatures rise. In Krakauer's words, "the pronounced warming of the Himalayan climate in recent years has made the Icefall more unstable than ever, and there is still no way to predict when a serac is going to topple over." 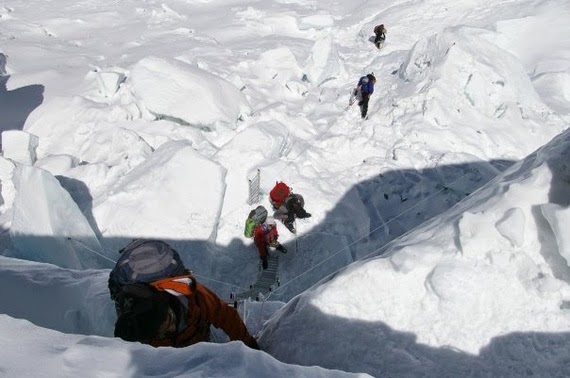 Between increased climber traffic, the sun's rays, and slow-but-sure glacial movement, the Khumbu Icefall has taken a beating in recent years. (Tim Rippel/Facebook)

Or take it from Tim Rippel, who runs Peak Freaks and was blogging from Base Camp last week:

As a professional member of the Canadian Avalanche Association I have my educated concerns. The mountain has been deteriorating rapidly the past three years due [to] global warming and the breakdown in the Khumbu ice-fall is dramatic, especially at the upper icefall. We need to learn more about what is going on up there. Each day we sit and listen to the groaning and crashing of the glacier.

The Icefall is a formation of the Khumbu glacier, which stretches between Everest and a neighboring peak called Lhotse. And, like others around the globe, this glacier is melting. (A caveat: Glaciers in the nearby Karakoram region, home to the towering K2, appear to be growing, according to the latest research.) The Khumbu glacier shifts by a few feet each day and has shrunk by more than half a mile in length (from 12,040 meters to 11,097 meters) over the past 50 years—though it's by no means the fastest-retreating glacier in the region. Base Camp, which sits on the glacier below the Icefall, has lost about 40 feet in elevation over the same time period, according to the glaciologist Mauri Pelto.

"If it wasn't the tallest mountain in the world, you would never put yourself on a glacier this active," veteran guide Adrian Ballinger recently told the Associated Press.

The Himalayas have been called "the third pole" because the mountain range stores more snow and ice than any other region in the world except the North and South Poles. According to NASA, temperatures in this region have been increasing by 0.5 degrees Fahrenheit per decade since 1980, a rate twice as high as the global average. And the impacts of global warming in the Himalayas are similar to those in the Arctic and Antarctic, with one big difference: Many more people live around this "third pole" than around the North or South Poles.

As a result of this relative population density, climate change is exacting human costs not just on Everest but in the entire region. Some 1.3 billion people depend on rivers that run from Himalayan glaciers like the Khumbu. A couple hundred million of those people live close enough to the mountains to be endangered by devastating wipeouts from glacial flood outbursts, which occur when glaciers melt into lakes and the lakes then overflow—"high-altitude disasters in the making," by one environmental journalist's estimation. There are thousands of glacial lakes in the Himalayas, and many of them are concentrated around Everest.

According to NASA, about 10 percent of Earth’s land surface is covered with ice, which is divided into roughly 200,000 glaciers—shown in blue on this map. (NASA/Robert Simmon, using data from the Randolph Glacier Inventory and Natural Earth.)

The UN's climate-change panel may have been wrong in 2007 when it estimated that Himalayan glaciers will be gone by 2035 (it later conceded that its predictions were "poorly substantiated"). But it's reiterating now that the world's tallest mountains truly are melting, endangering the water supplies of hundreds of millions of people in Asia.

These dramatic changes in climate are occurring at a time when human traffic on Everest is increasing. The best time to summit the mountain is in the middle of May, when the fierce winds of the jet stream, which whip around the summit almost all year long, temporarily move north. A perfect day to summit is one with little wind and no precipitation.

But there may be fewer of those days in the future. And yet, with the exception of this year, there will likely be more summit-seekers angling for positions on the route during narrowing, and increasingly unpredictable, windows of favorable weather. The mad Everest traffic jam of 2012 could become an annual affair. 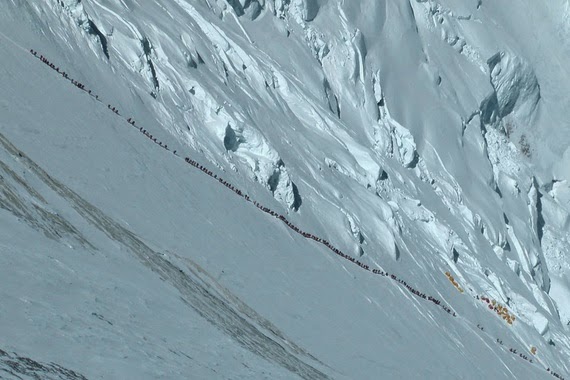 Ralf Dujmovits took this now-iconic photo from Everest's South Col on May 18, 2012: A conga line of climbers en route to the summit, in what turned out to be a disastrous day on the mountain.

Crowded lines to the summit pose a different kind of danger than crumbling seracs in the Khumbu Icefall. The editors of Outside lay out the scenario like this: Hundreds of people show up at Base Camp—some with limited skills and experience but all committed to scaling Everest. As the climbing season reaches its peak, only one or two occasions may arise when conditions are ripe for ascent to the top. When that first "summit window" opens up, climbers race to take advantage of it, leading to dangerous bottlenecks in the mountain's high-altitude "death zone." (One solution to this issue might be to climb Everest at a different time of year; in the 1980s, for instance, more climbers attempted to scale Everest in the fall than in the spring.)

Increasingly volatile climactic conditions on Everest may have contributed to the premature end of the 2014 climbing season. But they're unlikely to put a permanent freeze on expeditions up the mountain—and not just because of the growing demand from climbers. A few years ago, ClimateWire interviewed a Sherpa who had participated in Sir Edmund Hillary's historic expedition and, upon returning to Base Camp in 2011, was shocked by how much had changed since 1953. He predicted the end of snow on Everest within the next few decades.

"It's going to be no more snow, only rock," he told a reporter. However, he also said that the livelihood of his community was of primary concern, and that keeping climbers away was not an option: "If we stop the tourists to save the mountains, we don't have anything to do. Just grow potatoes and eat and sit."

Posted by seemorerocks at 22:04