Key stays mum about US murders of New Zealanders

Key, the bastard, will be right behind these war crimes,

John Key has now confessed and is now party to breaking International law by association with a criminal gang known as the United States government.

John Key is remaining tight-lipped about NZ deaths from drone attacks
The Prime Minister has been evasive, under questioning, about whether more New Zealanders may have been killed in US drone attacks in Yemen. 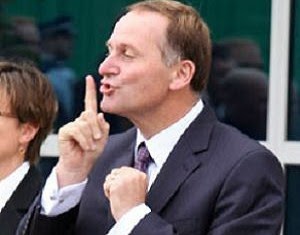 This follows his admission last week that a New Zealander died in an American military drone attack in Yemen last November.

John Key says he can't recall exactly when he was advised that a New Zealander was likely to have been killed, but he says his delay in releasing the information was partly because it took quite a while to obtain DNA evidence to confirm the dead man's identity, and also out of respect for the man's family.

He says he hasn't had any direct contact with the dead man's family here in New Zealand but he understands they were traumatised by the news.

Mr Key also says New Zealand officials have given the family as much information as they practically can. He wouldn't go into specific details on the nature of that information.

But when asked if other Kiwis may have been killed in drone strikes in Yemen, Mr Key repeatedly said today he was "not in a position to comment on that at this point", and "just wouldn't want to comment on it at this stage".

Mr Key says the Government doesn't necessarily always comment on deaths such as that which occurred in Yemen last year.

He went on to reiterate that his intelligence agencies provide what he says is a very important role in trying to monitor individuals whom the Government believes present a potential threat.

He said the man killed last year in Yemen was clearly in that threat category then added that there might be others.

However he wouldn't elaborate further.