The Everest avalanche - behind the headlines

Worst-ever climbing disaster on Mt. Everest: Was avalanche caused by global warming?
The icy slopes of Mount Everest have seen hundreds of deaths in the years since 1922, when seven people perished during the British Mount Everest Expedition. 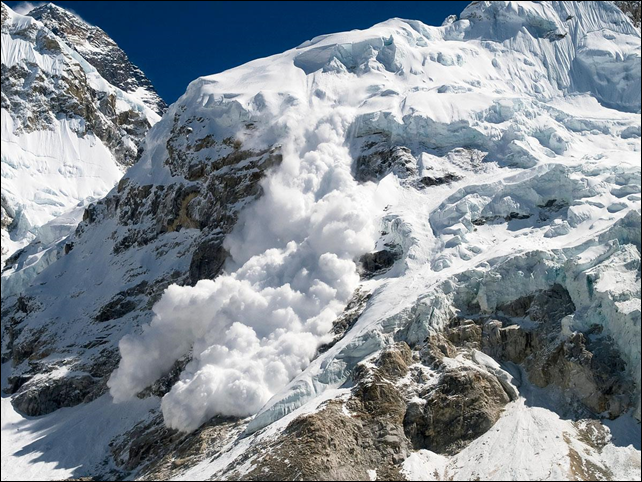 An avalanche today (April 18) claimed at least 12 lives, in what may be the single deadliest climbing event in the history of the world's tallest mountain (29,029 feet, or 8,848 meters). The death toll may rise, because other climbers are still missing, according to the BBC.

All of the deceased were guides from the ethnic Sherpa community, who were securing ropes for the start of the spring climbing season. And many Sherpas insist that Mount Everest and other mountains in the area have become more dangerous because of climate change. [Ice World: Gallery of Awe-Inspiring Glaciers]

"In 1989 when I first climbed Everest there was a lot of snow and ice, but now most of it has just become bare rock. That, as a result, is causing more rock falls, which is a danger to the climbers," said Apa Sherpa, a Nepali climber, as quoted in Discovery News.

"Also, climbing is becoming more difficult, because when you are on a [snowy] mountain you can wear crampons, but it's very dangerous and very slippery to walk on bare rock with crampons," he added.

Avalanches have been around for centuries, of course, and researchers can't blame any single event on climate change. Some evidence exists, however, that a warming planet and changes in precipitation may increse the likelihood of certain types of avalanches at certain times of the year.

Those findings were echoed in a 2013 report from the journal Applied Snow and Avalanche Research, which found that in Canada's Glacier National Park, an increase in rain (instead of snow) during the winter could result in greater instability in the snowpack, leading to more late-winter avalanches.

Apa Sherpa — who has conquered Everest more than 20 times — was once a farmer in the Himalayan region, but he turned to mountaineering after losing his home and his farm after a glacial lake outburst flood in 1985.

Researchers have warned that glacial lake outburst floods (GLOFs) are a particularly disastrous effect of climate change. As glaciers melt, immense lakes form behind relatively weak ice dams. When the ice dams are breached, the resulting burst of water and debris can cause sudden, catastrophic flooding.

"In the Himalayas, catastrophic risks of GLOFs have increased in recent years because most Himalayan glaciers have experienced remarkable downwasting under a warming climate," according to the authors of a 2013 study published in the journal PLOS ONE.

The researchers found that between 1990 and 2010, more than 1,000 glacial lakes in the Himalayas expanded rapidly, increasing their surface area by more than 17 percent, presenting an immediate danger to climbers and residents. "An effective monitoring and warning system for critical glacial lakes is urgently needed," the study authors wrote.

In another alarming finding, researchers from the University of Milan in Italy announced in 2013 that glaciers in the Mount Everest region have shrunk by 13 percent in the last 50 years, and the snowline has shifted upward by 590 feet (180 meters).

The glaciers are also shrinking at a faster rate, as regional precipitation has declined since 1992 by nearly 4 inches (10 cm) during the pre-monsoon and winter months, the Los Angeles Times reports. The loss of these glaciers could be catastrophic, since they provide water and power for about 1.5 billion people living in Asia.

The loss of glaciers in the region isn't uniform, however. A study published in the April 2012 issue of the journal Nature Geoscience found that glaciers in the Karakoram mountain range are holding steady, and some may even be growing in size due to changes in precipitation patterns.

The future of Everest

There's some concern in the mountaineering community that mountains like the iconic Everest may be unclimbable in the near future.

"What will happen in the future I cannot say but this much I can say from my own experiences — it has changed a lot," Apa Sherpa said.

In 2012, he completed a 120-day walk named the Climate Smart Celebrity Trek with the goal of raising awareness of climate change's impact on high-altitude mountain environments.

"I want to understand the impact of climate change on other people, but also I'd like tourism to play a role in changing their lives as it has changed mine," Apa Sherpa said.