The ocean-atmosphere system might well be described as an intricate pirouette between the forces of heat and moisture. Warming and cooling over the ocean and atmosphere alter the rate at which rains fall or lands dry. This interplay, called the hydrological cycle, is a primary governor the world’s weather, playing an integral part in both storm formation and dry spells alike.
As the Earth has warmed by about .8 degrees Celsius since 1880, this cycle of evaporation and precipitation, of drought and deluge at the extremes, intensified by about 6% on average. But this increase was uneven, pushed to an even greater abnormalities when both the Earth’s atmosphere and ocean surface experienced periods of either strong warming or relative cooling. It was from this combined uneveness and overall warming trend which arose a number of increasingly severe and dangerous weather events.
Most recently, as of last week, global ocean surface temperatures hit a very high +1.12 degrees Celsius above average temperature anomaly (vs the 1979 to 2000 average). This warm pulse pumped both heat and moisture into the world climate system. During recent years, major ocean warming episodes have coincided with intense periods of extreme rainfall and drought around the globe. So when anomalies hit severe levels last week, risks rose that atmospheric rivers of moisture and related extreme rainfall events would intensify.
By April 24, two entrained storm systems had erupted from the much hotter than normal Mediterranean Sea casting their long, dark shadows over Western and Central Asia as they began a tortuously slow march toward North Afghanistan:

(Entrained storm systems which produced the Afghanistan Floods on April 24, 2014. Afghanistan is beneath the hurricane-like swirl of cloud in the lower right image frame. Note the second entrained storm system just west of the Black Sea. Image source: LANCE-MODIS.)
The result was a three-day-long rain event that destroyed over 2,000 homes in North Afghanistan impacting 10,000 families and resulting in the loss of 180 souls. Severe losses also extended to crops and livestock over a broad region of this Central Asian state as individuals were forced to abandon farms and villages.
The inundation left many besieged by a violent swirl of raging waters spurring Afghanistan security forces to activation as helicopters were used to ferry stranded people to higher ground. Jawzjan provincial police chief Faqer Mohammad Jawzjani made this plea as the most recent Afghanistan weather disaster stretched resources to their limits:
“We have carried 1,500 people to safe areas of neighboring districts by helicopter. We need emergency assistance from the central government and aid agencies.”
Jawzjani’s pleas for assistance were echoed by local government officials throughout the stricken region as many more people remained isolated and without immediate help.
Afghanistan’s rugged terrain is particularly vulnerable to intense rain events. High volumes of rainfall channel through steep ravines and build up into large, wave-like flood pulses in Afghanistan’s heavily populated valleys. Low-lying homes constructed of mud and rock also often lack resiliency and are in danger of either collapse or inundation during severe storms.
As the Earth continues to warm, it is likely that both severe drought and rainfall events will continue to grown in frequency and intensity. Unfortunately, it is those who are most vulnerable — the poor and those who have contributed the least to the rapidly intensifying climate shock — who will bear the first and heaviest impacts.
Links:
Flash Floods Kill More Than 100 in Northern Afghanistan
How Global Warming Mangles the Jet Stream and Amps Up the Hydrological Cycle
Ocean Temperatures High Extraordinary +1.12 C Temperature Anomaly on April 22
LANCE-MODIS 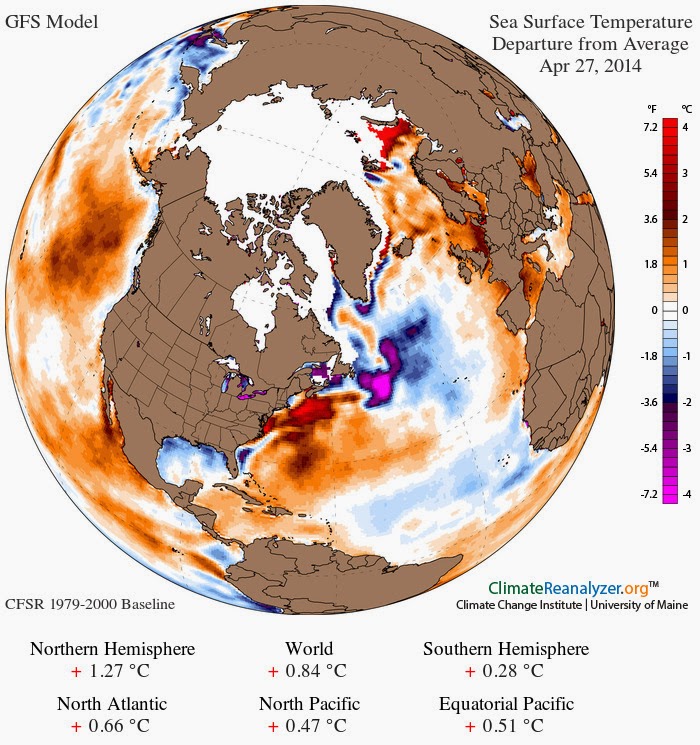