Army ranger says his friendly fire might have killed Pat Tillman
Nearly a decade later, a ranger in the United States Army now says he may have been the soldier that fatally shot professional football player-turned-corporal Pat Tillman in Afghanistan. 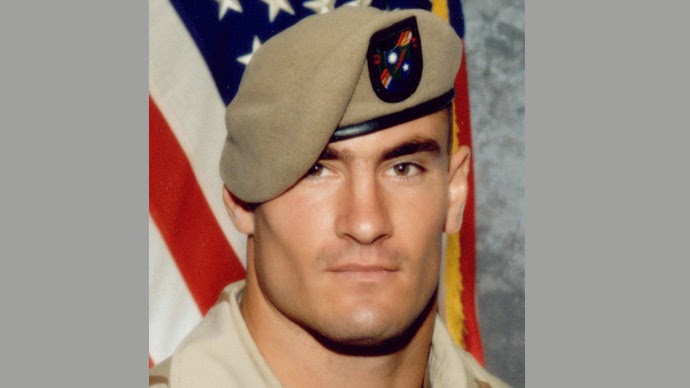 The April 22, 2004 incident remains to be one of the most discussed moments to occur during the longest-running American-led war ever: Tillman abandoned his high-profile career with the National Football League to join the US Army in aftermath of the September 11, 2001 terrorist attacks, only to be killed in southeast Afghanistan after a colleague accidentally opened fire.

Initially, the US military blamed Tillman's death on a group of insurgents. The soldier was killed “in the line of devastating enemy fire,” the Army said in an official release, but quickly after acknowledged in secret that friendly fire gone awry was likely to blame. It eventually became the subject of a congressional investigation and propelled the incident into the national spotlight.

Speaking to ESPN for an interview that aired over the weekend on Sunday, Steven Elliott said he believes he may be the one responsible for Tillman's death.

"It is possible, in my mind, that I hit him," Elliott told the sports network for what was his first time publicly ever discussing the incident.

"It would be disingenuous for me to say there is no way my rounds didn't kill him, because my rounds very well could have,” he said.

During the 2004 tragedy, Elliott says he was equipped with an M240 Bravo machine gun. Mike Fish for ESPN wrote that the soldiers were roughly 100 yards apart when Elliott and two others opened fire at Tillman after mistaking a man next to the former football star for an adversary. The other suspected shooters, Fish wrote, declined to comment.

“Tillman's group, which had traveled ahead, scaled a ridgeline to provide assistance to fellow Rangers under attack,” Fish wrote. “But a squad leader, Sgt. Greg Baker, in Elliott's armored vehicle misidentified an allied Afghan soldier positioned next to Tillman as the enemy and opened fire, killing the Afghan and prompting Elliott and two other Rangers to fire upon what Elliott called shadowy images, later learned to have been Tillman and then-19-year-old Bryan O'Neal.”

Now 33, Elliott told ESPN's Outside the Lines program that he left the Army in 2007 and has since been treated for post-traumatic stress disorder as a result of his service. By speaking up, he said, he hoped he'd inspire other veterans to seek help.

According to the US Department of Veteran Affairs, as many a 20 percent of Iraq and Afghanistan War vets suffer from PTSD. 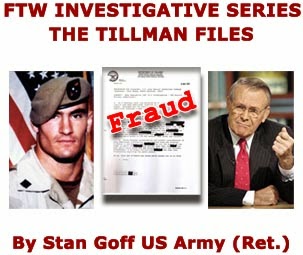 It was Mike Ruppert and Stan Goff who, a decade ago blew the cover-up of the Pat Tillman affair and lost Rumsfield his job

[Pat Tillman was no red-necked, unthinking friend of the Neocons. Pat Tillman was a football star and a scholar. He was chillingly handsome; his oversized square jaw and Herculean physique made him look like GI Joe come to life. He had been openly criticizing the Bush Administration’s war on terror while serving as an active-duty US Army Ranger in both Iraq and Afghanistan. He knew the war was wrong, but continued to do his duty faithfully and energetically. He complained to Navy SEALs, fellow rangers, Special Forces; anyone who would listen. He was keeping a diary and he was looking forward to the day when he might return home to retake his position as a defensive safety for the Phoenix Cardinals.

Can you imagine what the fallout would have been if, on every sports show in the country, followed by every mainstream media outlet, the archetypal American hero had pulled the propaganda carpet fully and completely out from under Bush, Cheney and Rumsfeld?

Pat Tillman was killed by friendly fire in what the best-case indicates was a surreal blend of bad judgment, homicidal madness, panic, grotesque mismanagement, lies, and a cover up that is proving to have so many layers that FTW has decided to make this case a major, long-term investigative project. In part that is because we have already uncovered crimes, falsification of records, lies and—as Stan Goff will show you—disingenuousness of cosmic proportions. “Don’t piss on my leg and tell me it’s raining,” Stan will tell you is an old saying. It seems like everyone’s been pissed on here—especially the American people.

Just before FTW published Part I of this series I drove to Mary Tillman’s residence in Northern California and spent an entire night hand-copying more than 2,000 pages of the Army’s investigation into Tillman’s death. All I will say is that Mary Tillman is a tough, bright, and unspeakably decent human being who does not want to be in the spotlight. She wants justice.

Except perhaps for the Kean Commission report on 9-11, in my 30 years of studying and writing criminal investigative reports, government inquiries, and court records I have never seen a more cooked and doctored piece of work than the US Army’s investigation into Tillman’s death.

There are crimes here. We will show you those crimes. Some of those crimes, we believe, lead directly to an already beleaguered Donald Rumsfeld. As just one example, Tillman’s posthumous Silver Star award was in the works even before the After-Action Report had been written. This is a complete violation of Army procedure. Who issued the orders to do that?

Many will suspect and want to know if Pat Tillman was deliberately murdered to prevent his coming home to guest spots on ESPN, CNN, and all the networks. There is no doubt that he intended to speak out. FTW can’t answer that definitively yet because Stan Goff and I have not finished going through the records. I can tell you that what we have found is enough to thoroughly discredit the Department of Defense and show multiple violations (some criminal) on the part of many officers and their civilian leadership.

We will take as long as we need to with this one. It may run into ten or more parts. It may take months. We will publish as we get each part completed.

And I can tell you that when Donald Rumsfeld decided to piss on Mary Tillman’s leg, on retired US Army Special Forces Master Sergeant Stan Goff’s leg, and on former LAPD detective Mike Ruppert’s leg, he pissed in the wrong place. We are representatives of and for the American people.

Pat Tillman was an honorable, brave, intelligent and strong-willed American. He did not support tyranny and he recognized it and name-called it when he saw it. His ultimate mistake was simply believing -- for a fateful moment -- that calling out to identify himself would save him just before three American bullets blew his head off.

“I’m Pat fucking Tillman!” he screamed. These were his last words. – MCR

For the Pat Tillman files on From the Wilderness GO HERE