A warning from ex- Australian PM Maclolm Fraser. As we have already seen he has definite views onAmerican policies in the Ukraine and towards Russia

NZ warned as US and China raise stakes
A former Australian prime minister has warned Australia risks being pulled into a war with China because it has surrendered its strategic independence to Washington, but a security expert says New Zealand's position is even more precarious. 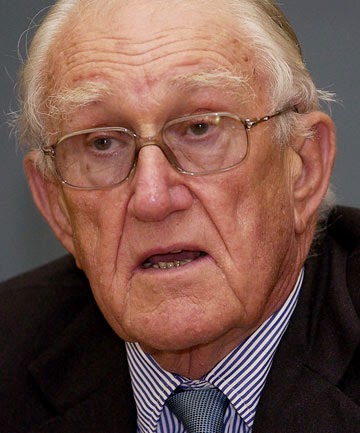 In what is being labelled the most serious questioning of Australia's foreign policy by a former prime minister since World War II, former Liberal leader Malcolm Fraser said he had become "very uneasy" at the level of Australia's compliance with US strategic interests.

"Our armed forces are so closely intertwined with theirs and we really have lost the capacity to make our own strategic decisions," Fraser said yesterday.

With US President Barack Obama confirming the US would back Japan in any conflict over disputed islands in the East China Sea, Fraser called for a more basic interpretation of the Anzus treaty, restricting its scope to consultation initially - rather than the assumption of automatic military involvement.

Fraser has also called for a new debate about Australian-American military ties, warning that the secretive Pine Gap facility would become a target as it would likely be pivotal to the US capability to identify and neutralise Chinese nuclear weapons sites.

Strategic and security analyst Paul Buchanan said it was the strongest strategy critique he had heard from any Australian leader.

He said Australia was replacing the UK as the US's foremost military ally, but held leverage over China because the latter needed its vital strategic resources such as minerals.

New Zealand also traded preferentially with China while tying itself to the security interests of the US, but did not enjoy the same economic leverage.

"The Chinese have to tread much more lightly with the Australians than they do with us," Buchanan told the Sunday Star-Times.

Buchanan said the US and China were "slowly edging towards a confrontation" but China's military capability meant any conflict was at least 20 years away.

Buchanan said if Australia was "deputy sheriff" of the US in the southern hemisphere, "then we're the deputy's assistant".

As relations with the US grew warmer and we once again became "first tier" military partners, it put New Zealand in an awkward position, Buchanan said.

"We push trade but then we want to be very tightly aligned with the US on security matters and I think that down the road, way before military confrontation, the Chinese are going to push the issue and say ‘you've got to choose, we can't have you as a major US security ally when your export markets depend so heavily on us'."

At the same time, there would be pressure from the US to join it in any military action.

"If push comes to shove in the South China Sea I have no doubt the US will ask us to help out. We will need to come on the US side."

Buchanan said the Chinese were "acutely aware" New Zealand was an active part of the "five eyes" spy programme and that could cause problems down the track, especially if it was revealed we have been spying on China.

"The friendship is not as honest as the Chinese may think."

Meanwhile, Fraser said the high level of military integration, including through bases such as Pine Gap, meant Australia would have difficulty convincing the world that it was not taking part in a US-led conflict even if, formally, Canberra tried to stay out of it.

Fraser described the American "pivot" into the western Pacific, announced by Obama in the Australian Parliament in 2011, and which relies heavily on Australia in an operational sense, as another strategic error that commits Australia to a wrong-headed US strategy of containment of China.

"Military encirclement was necessary in relation to the Soviet Union but China is quite a different story," he said.

His answer was to pull back by closing down the US training bases in the Northern Territory and advising Washington that Pine Gap will also be shut down.

Fraser was Australia's prime minister from 1975 to 1983. He sets out his thoughts in a new book, Dangerous Allies

Posted by seemorerocks at 21:36