I have been busy in the past week and have not been able to devote any time to climate change debate.

There are only two areas where I would question Paul. The first is that he does not seem to have heard Guy McPherson when he says that it is a question of habitat. As a conservation biologist he knows that outside a range of temperatures plants which provide us with food cannot survive. In an acidic ocean phytoplankton is unable to survive.

These are not of the nature of crop failures due to extreme weather. This is a permanent removal of support for human and mammalian life.

It is also necessary to bring into the discussion the many other feedbacks identified by Guy from the literature.

I am cognisant that Malcolm Light, a member of APEG who made the original prediction of NTHE within one generation, is absent from the deabte.

Finally, due to a whole range of factors I do not agree that geoengineering is going to be our salvation


Perhaps the most important factor (identified by Sam Carana) is the lack of any political will to do anything to change the situation, or anything other than contributing towards an insane descent towards mass suicide 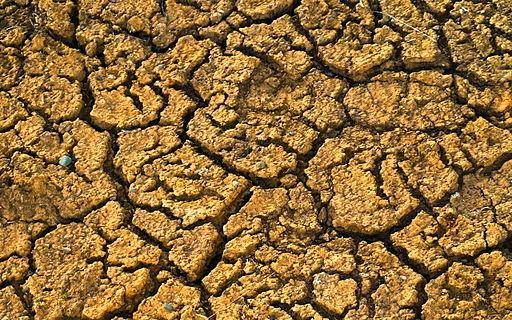 Is there a mechanism that could make humanity go extinct in the not-too-distant future, i.e. within a handful of decades?


Most people will be aware that emissions due to human activity are causing global warming, as illustrated by the arrow marked 1 in the image on the left. Global warming can cause changes to the land, to vegetation and to the weather. This can result in wildfires that can in turn cause emissions, thus closing the loop and forming a self-reinforcing cycle that progressively makes things worse.

Furthermore, less forests and soil carbon also constitute a decrease in carbon sinks, resulting in carbon that would otherwise have been absorbed by such sinks to instead remain in the atmosphere, thus causing more global warming, as illustrated by the additional downward arrow in the image on the right. In conclusion, there are a number of processes at work that can all reinforce the impact of global warming.

Emissions can also contribute more directly to land degradation, to changes in vegetation and to more extreme weather, as indicated by the additional arrow pointing upward in the image on the right. A recent study by Yuan Wang et al. found that aerosols formed by human activities from fast-growing Asian economies can cause more extreme weather, making storms along the Pacific storm track deeper, stronger, and more intense, while increasing precipitation and poleward heat transport.

Accelerated Warming in the Arctic

Similar developments appear to be taking place over the North Atlantic. Huge pollution clouds from North America are moving over the North Atlantic as the Earth spins. In addition, the Gulf Stream carries ever warmer water into the Arctic Ocean. As the image below shows, sea surface temperature anomalies at the highest end of the scale (8 degrees Celsius) are visible off the coast of North America, streching out all the way into the Arctic Ocean.

As said, feedbacks as are making the situation progressively worse. Feedback loops are causing warming in the Arctic to accelerate. Warming in the Arctic is accelerating with the demise of the snow and ice cover in the Arctic, and this is only feedback #1 out out many feedbacks that are hitting the Arctic, as described in an earlier post. As the temperature difference between the equator and the Arctic decreases, the Jet Stream is changing, making it easier for cold air to move out of the Arctic and for warm air from lower latitudes to move in (feedback #10). 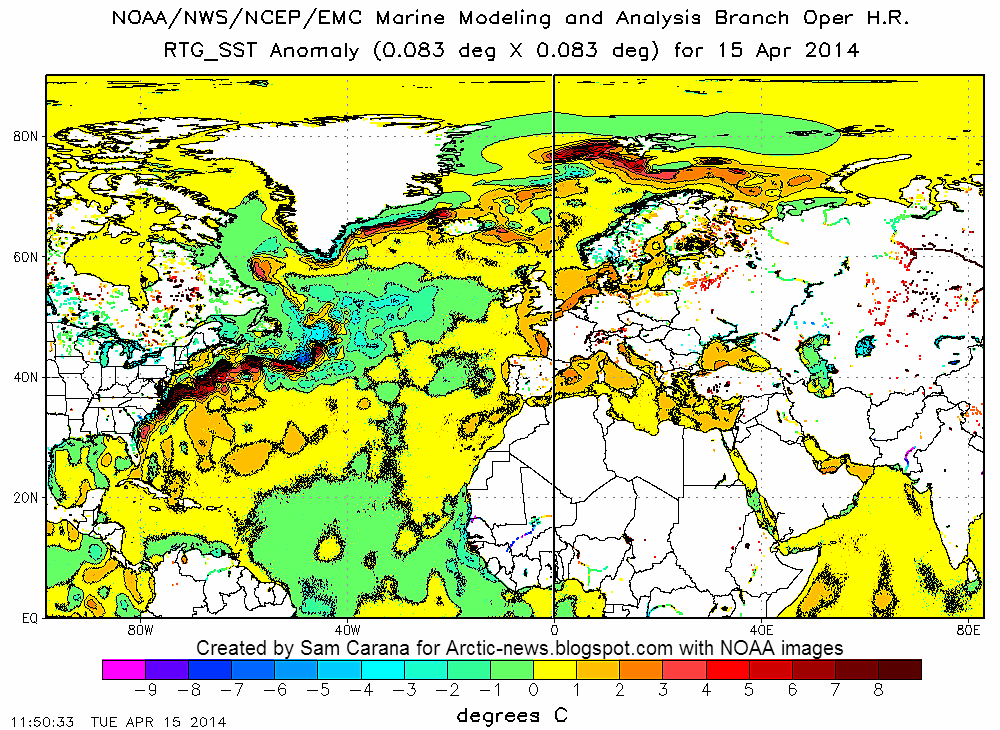 The danger is that, as temperatures over the Arctic Ocean warm up further and as the Gulf Stream carries ever warmer water into the Arctic Ocean, large quantitities of methane will erupt abruptly from the seafloor of the Arctic Ocean, adding a third kind of warming, runaway warming resulting in abrupt climate change, and leading to mass death, destruction and extiction of species including humans.

Persistence of such a progression makes it inevitable that the rest of Earth will follow the huge temperature rises in the Arctic. Massive wildfires will first ignite across higher latitudes, adding further greenhouse gas emissions and causing large deposits of soot on the remaining snow and ice on Earth, with a huge veil of methane eventually spreading around the globe. The poster below, from an earlier post, illustrates the danger.

How likely is it that the above mechanism will cause human extinction within the next few decades? What views do the various contributors to the Arctic-news blog have on this?

Guy McPherson has long argued that, given the strengths of the combined feedbacks and given the lack of political will to take action, near-term human extinction is virtually inevitable.

In the video below, Paul Beckwith responds to the question: Can climate change cause human extinction?


Further contributors are invited to have their views added to this post as well. While many contributors may largely share Paul Beckwith's comments, it's important to highlight that contributors each have their own views, and this extends to their preference for a specific plan of action.

One of the more controversial issues is the use of geo-engineering. Guy McPherson doesn't believe geo-engineering will be successful. In the video below, Paul Beckwith gives his (more positive) views on this.


I must admit that the lack of political will to act is rather depressing, especially given the huge challenges ahead. So, I can understand that this can make some of us pessimistic at times. Nonetheless, I am an optimist at heart and I am convinced that we can get it right by giving more support to a Climate Plan that is both comprehensive and effective, as discussed at ClimatePlan.blogspot.com