Here is your daily feed of propaganda. Think of the Western media was going to mention the highly embarrassing capture of special Ukrainian forces by Russian militias? Not on your nelly!

The capture of the TV station is hard to avoid; the kidnapping of European security agents can be directed against Russians, but the capture of members of the Alpha force, including a lieutenant colonel, runs directly against the western narrative.

Ukraine: pro-Russian forces seize TV station in Donetsk and parade captives
The new round of sanctions against Russia, which the EU and the US plan to unveil Monday, will not target the Russian economy. Washington said it won’t use economic sanctions without the EU also signing up to them. 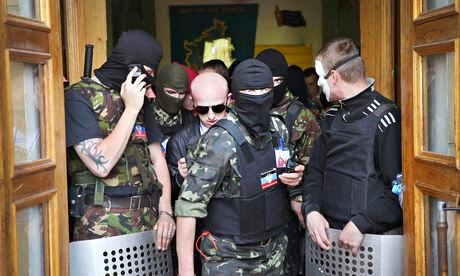 Pro-Russian separatists seized control of the TV station in the eastern city of Donetsk on Sunday, and immediately set about switching off Ukrainian TV and replacing it with Russian channels that broadcast exclusively pro-Kremlin views.

A crowd of about 300 left a rally in Donetsk's Lenin Square and marched through the city centre, pulling down Ukrainian flags.

With police looking on but not intervening, the activists surged into the regional television centre. Masked youths, armed with baseball bats, ran up the flag of the "Donetsk People's Republic" from the roof of the Stalinist neo-classical building.

Its shaken director, Oleg Dzholos, emerged soon afterwards to say that the separatists had brought with them a technician who was turning off Kiev television and replacing it with Rossiya 24. The Russian state channel calls Ukraine's pro-western leaders "fascists" and frequently runs montages of them with footage of the Nazis.

"We hope to continue broadcasting," Dzholos said. His staff of 250 would be back at work on Monday morning, he said. With men in balaclavas and military fatigues standing on his steps, he admitted: "It's difficult to work in these circumstances. I hope we might be safe here."

The seizure is another blow to Kiev, which has struggled to assert its authority in the east, amid an insurrection that it says is plotted by Moscow. Law-enforcement agencies here have largely sided with anti-Kiev protesters and have made little effort to stop the occupations of town halls and other buildings. Three riot police with Kalashnikovs stood next to the TV station on Sunday, apparently ensuring the takeover went smoothly.

The activists complain that Kiev channels have failed to reflect the popular mood in the Russophone Donbass region. But only a few hundred anti-Kiev activists turned up for a rally in Donetsk on Sunday, in a city of one million people. The capture of the TV tower appears to be part of an unfolding plan to shut out information critical of Moscow and replace it with Kremlin propaganda.

In Slavyansk, meanwhile, rebels released one of eight European military observers kidnapped on Friday. Stella Korosheva, a spokeswoman for the town's separatist leadership, said they had freed a Swede. "He has a mild form of diabetes so we decided to let him go." Asked if he was the only one to be released, she told the Associated Press: "Yes." An OSCE vehicle, with three unarmed men, collected him and drove off.

Earlier on Sunday, the military observers appeared in public for the first time, looking tired but unharmed. They took part in a press conference with Slavyansk's self-appointed mayor, Vyacheslav Ponomarev. As well as the Swede, the EU nationals include four Germans, a Pole, a Dane, and a Czech officer. Ponomarev did not produce five members of Ukraine's armed forces captured at the same time on Friday.

Speaking in German, the senior officer, Col Axel Schneider, defended his mission to the region, under the auspices of the Organisation for Security and Co-operation in Europe (OSCE). He said claims by Ponomarev that the group were Nato spies were blatantly false. "We are not Nato," he said. "Our mission was transparent. All OSCE members, including Russia, knew about it."

Two OSCE monitors were also briefly detained on Sunday in Yenakiyevo, also in the Donestk region, and the home town of Ukraine's ex-president Viktor Yanukovych. They were seized at a checkpoint and taken to the administration building. Local police then secured their release.

In Slavyansk, Schneider said his team had followed diplomatic protocols. He said they had not tried to enter the town but were instead a few miles south of it heading back towards Donetsk, when gunmen intercepted their minivan. He said they had been looking for tanks and artillery at the time but had not found any.

The rebels have described the kidnapped Europeans as prisoners of war and said they might be bartered for imprisoned pro-Russian activists in Kiev. Schneider said he had no idea what the method for a prisoner-swap might be, adding: "We are completely in the hands of Mayor Ponomarev. We have no indication when we will be sent home to our countries," he said.

Schneider said they had initially been housed in a basement but were transferred on Saturday to a comfortable room with light and air-conditioning. He said they had agreed to take part in a press conference at Ponomarev's suggestion "so our families might see us". The mayor called the Europeans "guests" rather than hostages.

The account of the kidnapping raises questions as to whether the rebels were tipped off about the group's movements in advance. The road between Slavyansk and Kramatorsk, nine miles (15km) to the south, is usually safe, with traffic flowing regularly in both directions. The one rebel checkpoint on the outskirts of Kramatorsk is low key. The military observers were carrying ID but were not wearing uniforms and were unarmed.

Schneider denied rebel claims he had come to the area with spying equipment and said: "We just had small cameras with us." The mayor could use the group to get his message out, he added.

Ponomarev, however, said he would not release the kidnapped military observers despite talks between the separatists and the Vienna-based OSCE. "We are in a war situation," he said.

The pro-Russian militia is also holding Ukrainian journalists, local residents and the town's elected mayor, who has been allowed visits from her family and hairdresser. Another Ukrainian reporter, Lviv-based Yury Lelyavsky, was seized on Friday. The EU nationals appear to be high-value bargaining chips as further confrontation between the west and Moscow looms.

The G7 is expected to announce on Monday an expansion of the list of Russian individuals and companies subject to sanctions. They will include close friends of Vladimir Putin as well as those allegedly involved in co-ordinating unrest across Ukraine. The US and EU accuse Moscow of failing to implement a deal agreed in Geneva under which illegal groups would end takeovers of official buildings and give up their weapons.

The British foreign secretary, William Hague, said that while diplomatic routes to de-escalate the crisis remained open, Europe and the US were also working on more far-reaching measures of economic, trade and financial sanctions in case Russia did not back down.

"Those are for the future. What we will hear about in the coming days, what we will agree … is an expansion of existing sanctions, measures against individuals or entities in Russia," Hague told Sky News. He said Britain and its allies would be willing to accept the potential costs to their own countries of implementing further reaching economic or trade sanctions.

Hague added that international observers being held by pro-Russian separatists should be released "immediately and unconditionally" and called on Russia to assist by lobbying the rebel groups.

Pro-Russian separatists in eastern Ukraine show the media three Ukrainian intelligence officers they say they detained in the town of Gorlivka. Warning: video contains images some may find distressing


None of that, however, for CNN!

Living on the edge in Eastern Ukraine

Not everyone in Eastern Ukraine is pro-Russian, and those who aren't live in fear. CNN's Arwa Damon reports

Posted by seemorerocks at 08:57