A Dangerous Dance of Frost and Flame: More Than 100 Wildfires Now Raging Along Siberian Melt-Freeze Line 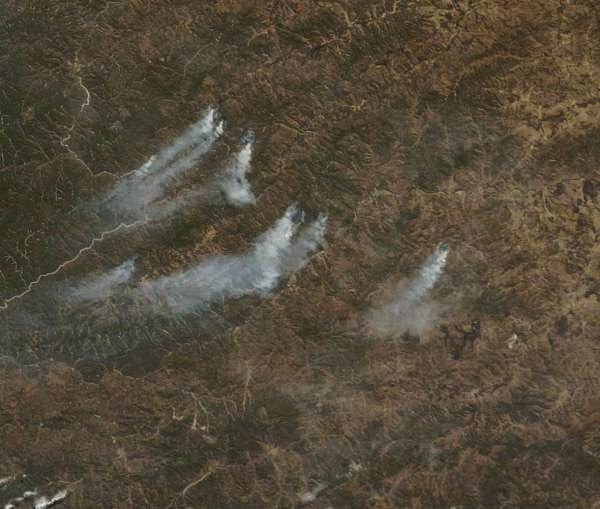 (Multiple wildfires raging in the Amur region of Russia on April 23, 2014. Image source: LANCE-MODIS.)
Robertscribbler,
23 April, 2013
Anomalous, global-warming-enhanced, fires continued to erupt across Eastern Russia this week, chasing a rapidly receding freeze line north and into zones still frozen, but starting to shake off ice cover far too soon for comfort.
According to reports from Radio Free Europe, more than 5,000 pieces of heavy equipment and many more firefighters are now battling blazes throughout Siberia this week. As of April 20th, more than 100 blazes were reported in numerous regions including: the Orenburg area around Lake Baikal, the Amur region, the Birobidzhan Autonomous Oblast, the Primorsky Krai, and the Far Eastern region of Russia.
The fires come as temperatures ranging from 5-18 C above average continued throughout a region that has experienced hotter than normal temperatures all winter and on into spring of 2014.
For example, the average April high temperature for the region of Lake Baikal is typically a frigid 28 F, while this week is expected to see highs in the lower to middle 40s. Further east, the temperature extremes are more radical. In Amur Blagoveshchensk, the average low is about 27 degrees F for this time of year, the average high, about 50. But today the low was 52 and the high is forecast to be 78 — 25 and 28 degrees above average respectively.
All across Eastern Russia, the story is the same: above average warmth, early thaw, summer-like temperatures in spring time. It has been this way day after day, month after month. Since 2010, the story has mostly been the same: early thaw, record or near record heat, amazing fire hazard. Even more concerning, the situation is steadily growing worse.
How Global Warming is Turning the Siberian Tundra into a Firetrap
Winters during cold regions are typically comparatively dry events. Though snows may pile up, the water content of the snows amount to much less moisture than it would seem. During spring, a gradual thaw ensures this moisture keeps the thin, top layer of soil above the permafrost (called the active layer) from drying out too rapidly. Typically only inches to a few feet in depth, this layer is far more susceptible to drying than a deeper layer with access to greater moisture sources at depth. But only frozen or melting permafrost currently rest below the active layer, creating a moisture barrier or worse — adding a potential fuel source for wildfires. 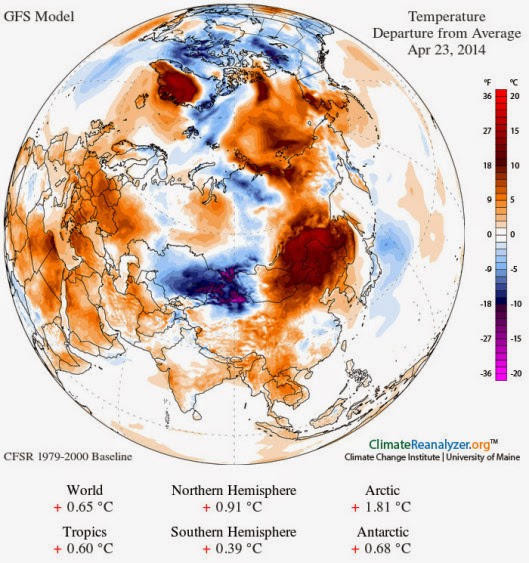 (Eastern Russia in a hot zone. Hot atmospheric ridge and coincident extreme temperature anomalies stretching from Southeast Asia, up through China and Eastern Russia and on up through the polar region. Information Source: NOAA Global Forecast Systems Model. Image source: University of Maine.)
In years of warmer than usual temperatures, as has happened more and more often under the current regime of human-caused warming, the thaw occurs rapidly and the active layer quickly dries out. This loss of moisture amplifies into a kind of tundra drought that can block atmospheric moisture flows and prevent rainfall, compounding the drying problem until the more energetic storms of summer arrive.
In addition, expanding zones of thawing permafrost provide two added fuel sources for wildfires. Tundra melt in high water content areas forms into wet thermokarsts, mires or melt ponds that vent methane gas in high enough concentration to burn. Tundra melt that rapidly dries after thaw forms into a peat-like basement layer that can burn and smolder for long periods once ignited.
On average, temperatures have been rising by about .4 C per decade throughout Siberia. So almost every spring now falls into what would typically be called a hot year. In addition, amplification of Jet Stream wave patterns deliver proportionately more heat to regions in the up-slope of these high amplitude atmospheric pulses, forming hot, high pressure ridges. And this year, the heat ridge has consistently formed over China, Mongolia and Eastern Siberia — the region of the current large fire outbreaks. 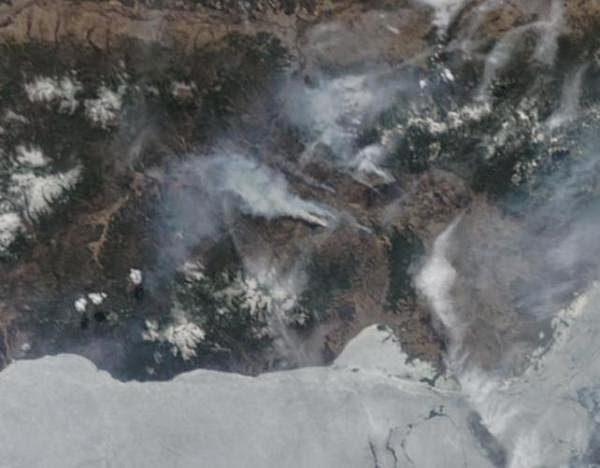 (Siberian wildfires burning on the shores of still-frozen Lake Baikal in southern Siberia on April 23, 2014. Image source: LANCE-MODIS.)
As a result, what we are seeing is an extraordinary outbreak of intense wildfires directly adjacent to still melting snow and frozen lakes. A surreal event that reminds one of the ever-at-war frost and fire giants of ancient Viking legend. But these giants, the fire giants at least, are a direct result of an ongoing and ever increasing human-caused heating of our world.
Links:
Radio Free Europe
University of Maine
NOAA Global Forecast Systems Model
LANCE-MODIS
Melting Permafrost Switches to Nasty, High-Gear Methane Release
Blagoveshchensk Weather
Lake Baikal Weather
Earth Under Fire
Posted by seemorerocks at 09:51