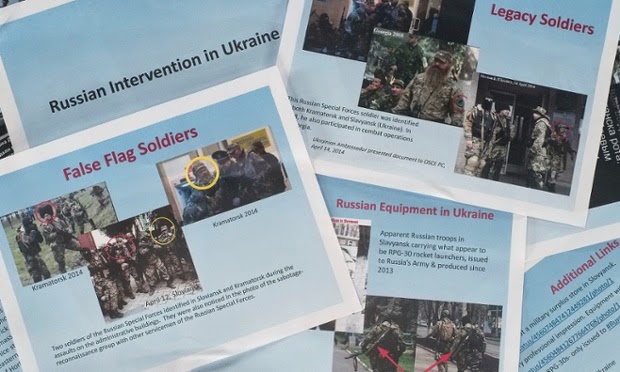 The Obama Administration hasn’t been able to offer much in the way of evidence for its narrative that Russia is secretly behind the protests in eastern Ukraine, but they’ve sure been looking awfully hard.

Today, desperately for something concrete, the State Department issued a batch of photographs, most showing protesters in eastern Ukrainian cities, and some showing Russian troops who the US insists must be the same guy.

The US started with a photo of a guy with a long beard in Slovyansk, and a picture of a Russian soldier in Georgia in 2008 with an even longer beard. Coincidence? The US can’t imagine it. 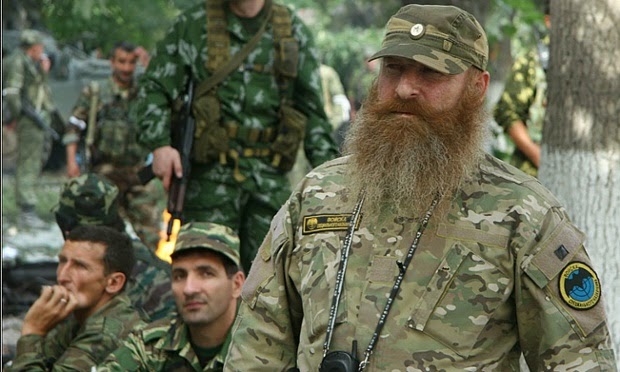 In addition to Beard Guy, the US also showed photographs of a poofy-haired guy in Kramatorsk, along with a group photograph of Russian Special Forces. In the back on the Special Forces photo, wearing a hat so we can’t see his poofy hair, is a guy with a similar goatee.

Beyond that, other photos showed the armed militia members holding guns “similar” to the kind the Russian military uses. That both are using Soviet surplus arms (as is Ukraine’s government and much of Eastern Europe, for that matter) is unsurpirising, but is the closest thing to a smoking gun the US appears to have been able to find


Caught On Camera? - Proof of Russian special forces in Ukraine?

Ukrainian officials point to the pictures in a dossier obtained Monday by CNN, arguing that the images show Russian "sabotage-reconnaissance groups" acting in Ukrainian towns.

CNN cannot independently confirm the photographs, some of which were first published in The New York Times.

The dossier shows what Ukrainian officials say are images of well-equipped gunmen in eastern Ukraine who look similar to photographs of Russian forces taken in Crimea, Russia and during Russia's 2008 invasion of Georgia.

Moscow has disavowed involvement in the takeover of government buildings in eastern Ukraine or other acts by often-masked pro-Russian gunmen.

But the photos, accepted as genuine by the Obama administration, appeared to lend credence to allegations by Ukrainian officials that Russian forces have been dispatched in eastern Ukraine to provoke a military confrontation.

If genuine, the photos also back up Western leaders who have claimed Russia's involvement. Last week, NATO commander Gen. Philip Breedlove wrote on the alliance's blog that what pro-Russian groups have described as an organic uprising is in reality a "well-planned and organized" military operation orchestrated by Moscow.

"There has been broad unity in the international community about the connection between Russia and some of the armed militants in eastern Ukraine, and the photos presented by the Ukrainians last week only further confirm this, which is why U.S. officials have continued to make that case," State Department spokesman Jen Psaki told CNN on Monday.

The question of whether Russia is involved in the unrest roiling eastern Ukraine is crucial as European observers try to enforce an agreement reached last week to lower tensions in the region by organizing the withdrawal of forces from government buildings and other facilities.

Officials who brokered the deal in Geneva said they hoped it would ease tensions. But there were some signs Monday that tensions are mounting.

Residents told CNN that armed militants seized the police station in Kramatorsk, Ukraine, late Monday. The police station had been stormed on April 12 before being handed back to local officials two days later.

Amateur video from the scene shows masked, armed men escorting the local police chief to a car after seizing the building

Posted by seemorerocks at 15:00