Bad news on the methane front

Annually, humans emit about 13.5 gigatons of carbon, or about 50 gigatons of CO2 equivalent gasses into the atmosphere. The measures are essentially the same — one just counts carbon weight, the other counts out all the additional hydrogen, oxygen, nitrogen or other atoms together with the carbon.
Of this massive volume, a volume at least six times the emission seen at any time in the geological past, even during the worst greenhouse gas extinction — the Permian — only a fraction remains in the atmosphere for any substantial period of time. This fraction continues to trap the heat and cause the effects we now see on a daily basis — extreme weather, record droughts, fires, floods, crop damage, sea ice loss, storms and an incessant rise in global temperatures.
The rest goes into what we call carbon sinks or stores.
Through the course of human-caused warming, scientists have been concerned that carbon sinks and stores will eventually fill up or, even worse, become emissions sources themselves. The result would be that a greater fraction of the human greenhouse gas emission would remain in the atmosphere longer and do even more damage through its now increased warming potential as natural sources began to emerge and multiply. 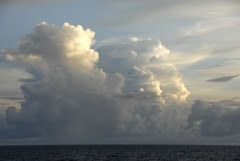 (Atmospheric elevator. Very large storms in the Pacific transport pollutants into the stratosphere. What impact is this having on one of the world’s major methane sinks — the hydroxyl shield? Image source: Alfred Wegener Institute.)

It is this kind of amplifying feedback that we’ve been sounding warnings on since 2012. And, according to new scientific research, there is serious reason for concern that another amplifying feedback in the form of erosion of the methane sink is now starting to develop coincidentally with rising rates of natural methane store emissions.

And it is here in our chilling and cautionary tale that we come to the story of how methane acts to warm the atmosphere…
As a molecule, methane is an extraordinarily potent heat trapping gas. If CO2 were the tortoise — persisting for hundreds or thousands of years and gradually and inexorably building up a potent heating force, methane is the hare — providing a very intense burst of heating potential for a short period before being sucked out of the atmosphere by either the hydroxyl sink in the tropopause or through interaction with the soil.
The hydroxyl sink lives as a thin layer of a detergent-like molecule consisting of one oxygen atom and one hydrogen atom (HO). The layer exists along a boundary between the troposphere and the stratosphere called the tropopause. It forms when Nitrous Oxide (NO2) encounters Ozone (O3) and water vapor (H2O) at a height of about 8-10 miles where solar radiation is of a wavelength shorter than 315 nanometers. The radiation energy sets off a reaction between these three molecules producing a layer of hydroxyl, a reactive compound that breaks down all sorts of nasty chemicals floating around in our atmosphere. It also breaks down methane. A service that is quite valuable, especially when you consider that methane’s heat forcing, without the rapid oxidization powers of the hydroxyl layer, would be far, far greater.
The heat potential of a single methane molecule is 80 times that of a single CO2 molecule (in the presence of aerosols, it jumps to 105 times that of CO2, somewhat reducing the aerosol cooling effect). And so it’s probably a good thing that the lifespan of a methane molecule in the current atmosphere is only about 8 years. In contrast, CO2 lives about 500 years before weathering or the deep ocean finally knock it out.
As a fraction of total greenhouse gas forcing, scientists conservatively calculate that the total methane overburden represents about 60 parts per million of additional CO2 equivalent heat forcing or a little more than half the total additional heat forcing from CO2. But this calculation takes into account the notion that methane is short lived and will tend to drop out, resulting in relatively less methane heat forcing over time.
Earth’s Hydroxyl Shield Now Has a Gaping Hole

And so it is that today we encounter a bit of a problem. For it appears that a large hole has now been blown in the methane/hydroxyl sink over the Pacific Ocean. 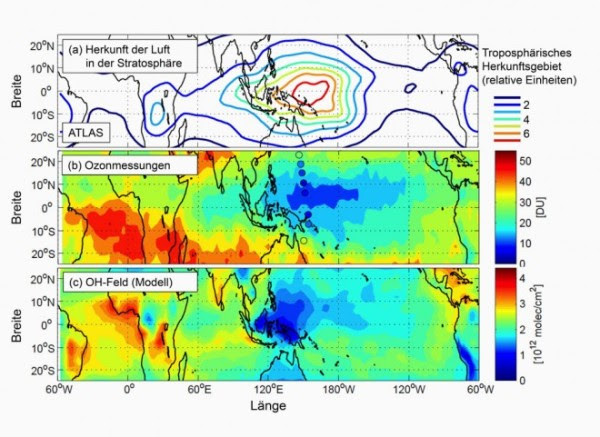 Though the cause of the current hole is unknown, what is known is that powerful thunderstorms in the region provide atmospheric lift and could have mixed in ozone destroying chemicals such as bromine and chlorine that significantly reduced one of the key constituents of hydroxyl formation.
The hole is quite large and while the initial paper by Markus Rex primarily noted concerns about additional volatile chemicals reaching the stratosphere through the hole, these major hydroxyl reductions over such a large area are also likely to lengthen the atmospheric lifespan of methane.
This feedback may well be a result of other human pollutants and have a possible negative effect on global warming by acting to significantly degrade a major carbon sink. If such an instance is confirmed, it may well be the first such case of its kind where two separate subsets of pollution create a kind of harmonic, but indirect, warming potential effect.
In any case, not a good outcome.

10 to 165% More Methane to be Released From Wetlands

A second very large methane sink/store is encompassed by the world’s vast swaths of wetlands. There, organic materials in the wetlands soil bind electrons needed by methane producing bacteria during regular wet-dry cycles, preventing a portion of the organic material from being broken down as methane. In essence, it’s a kind of indirect methane sink in that it prevents carbon-based materials from being converted to methane by already active methane producing bacteria.
But new research conducted by a team of Swiss and German researchers has found that as climate warms, wetlands are increasingly submerged, and large regions of tundra wetlands thaw, the electron binding process tends to run in reverse even as more wetlands become available for methane emission. In essence, warming both submerges more wetlands even as it generates more wetlands due to tundra thaw. It’s a kind of one, two punch that these researchers are saying could push global methane production radically higher.
As a result, the very large organic carbon store contained in wetlands would increasingly be emitted as methane and the wetlands would act less and less as a methane sink and more and more as a venting methane store. The new addition of wetlands from melting tundra only compounds the process. Researchers found that wetlands are likely to emit between 10 and 165% more methane due to these combined impacts.
It’s worth noting that global methane emissions from wetlands are currently about 165 teragrams (megatons metric) each year. So the new research estimates that annual emissions from these sources will increase by between 17 and 260 megatons annually. By comparison, the total annual methane emission from all sources (including the human addition) is about 600 megatons each year.
Pace of global atmospheric methane increases is tracked by NOAA’s Earth Systems Research Laboratory. Mauna Loa annual measures and trends can be seen here: 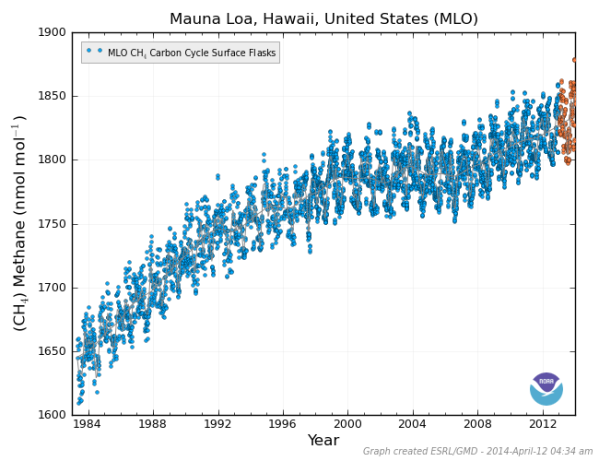 Fading Sinks, Releases From Stores
These new discoveries — the formation of a hydroxyl shield hole and the recent study finding that global warming will lead to a greater annual release of methane from the world’s wetlands — are likely to combine with ongoing human methane emissions that are now radically increased due to hydrolic fracturing for new gas deposits and with potentially increasing methane emissions from subsea sources such as worldwide stores of methane hydrates and the very vulnerable methane stores in the East Siberian Arctic Shelf. The result is a much greater risk that current methane levels will rise and/or remain high for longer than expected. In total, it’s a significant risk of additional major warming on top of an already very powerful heat forcing coming from a rising human CO2 emission.
Links:
Markus Rex, Alfred-Wegener-Institute
Methane Climate Change Risk Suggested By Proof of Redox Cycling of Humic Substances
Sea Ice Melt, Methane Release Shows Amplifying Feedbacks to Human-Caused Climate Change
NOAA
Global Methane Emissions From Oil and Gas
Methane Emissions From Wetlands
Hole Found in Natural Protective Layer
Tropospheric Chemistry
A Faustian Bargain on the Short Road to Hell
Hat Tip to Colorado Bob!