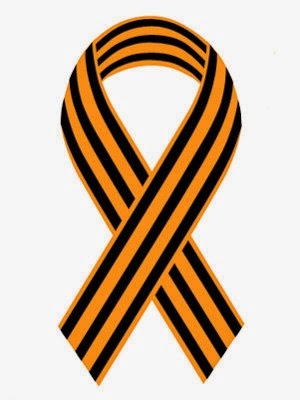 “The order to use force against civilians has already been given, and if this military machine is not stopped, the amount of casualties will only grow,” Russian Defense Minister Sergey Shoigu said during an official meeting in Moscow.

“War games by NATO in Poland and the Baltic states are not helping the normalization of the situation. We are forced to react to the situation.”

Shoigu said that the drills involve march and deployment exercises by forces in the southern and western military districts, and separate Air Force maneuvers.

Shoigu said that 11,000 Ukrainian soldiers, 160 tanks, 230 armored carriers and at least 150 artillery pieces are involved in the operation against anti-Kiev activists.

“National guard units and Right Sector extremists are fighting against the peaceful population, as well as a volunteer Donbass ‘anti-terrorist’ unit. Also security and internal forces transferred to Lugansk and Donetsk from other areas of the country are suppressing dissent,” the minister said.

He added that Ukrainian sabotage units have been deployed near the Russian border.

In contrast, Shoigu said that the pro-Russian self-defense units number about 2,000 and have about 100 guns between them, which have mostly been taken from local police stations.

I did not expect such a dramatic and rapid escalation and if I was on the side of the forces currently attacking Slaviansk I would get really frightened.  The size of the force Shoigu has just mobilized is huge, potentially enough to fight a major war on a full continental front.  It also includes the best and most powerful and battle-hardened Russian units from the southern military district.

Now, this does not at all mean that the FULL forces of the military districts have been mobilized or are moving.  But that the Russian high command can draw whatever units it deems necessary from these two districts (a misnomer, by the way, they are now called "strategic directions").  One thing is certain, not even during the Chechen wars or 08.08.08 did Russia assemble such a powerful military force.  I am frankly astounded that they would make such a decision and announce it publicly even though the Ukrainian attack so far has been, frankly, minimal and lame.

Also, notice that unlike Putin, Shoigu is not talking about "consequences" for "individuals" but about stopping the Ukrainian military machine!  He also presents this not a a choice for Russia, but as something Russia is forced to do.  He clearly knows something we don't.  Maybe a NATO move in western Ukraine?  It seems totally crazy to me that NATO would do that, but how can I otherwise explain the huge size of the force Russia has just put on alert?!  You don't need the resources of two of you most powerful strategic directions to deal with 5'000+ SBU/RS thugs?  For that a single ODON division would be plenty.

I am getting very worried by this and I hope that this is a mistranslation or some kind of misunderstanding on RT's part (stuff happens).  But if not, then this is very, very serious.

I will try my best to figure out what is going on.

Stay tuned (and say prayer for peace), and let's hope that things calm down.

UPDATE @ 1522Z:  5 people reported killed in Slaviansk.  Ukies have entered Slaviansk, there are combats inside the city.  The cellular network has been disconnected 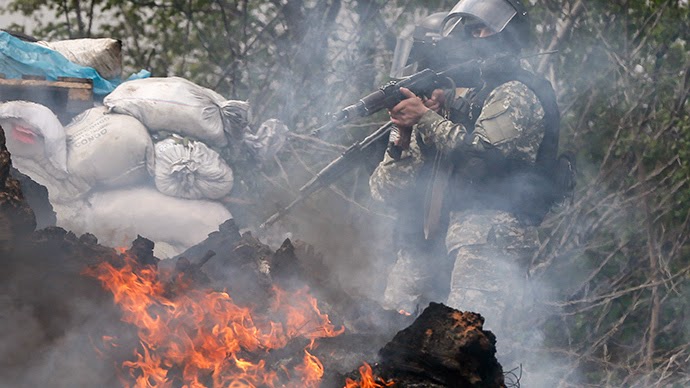 Pretty much all my sources confirm that the junta in Kiev has launched an attack on the city of Slaviansk.  Most sources say that only SBU and Right Sector forces are involved, though other source report that the "special forces" (no details) seen on the airport near Slaviansk are also participating.  My personal take is that at most the military is providing some support, but that the real fighting is now purely SBU + RS.  From the junta's perspective, this is a very wise decision because, unlike the paratroopers or regular military forces, the SBU/RS troops will be more than happy to kill, kidnap, torture or maim what they see as local "separatists" and "Moskal-supporters".  Furthermore, also unlike the paratroopers or regular military units, the SBU/RS thugs can expect no mercy at all from the locals, so they will not surrender or, even less so, switch sides.

So now the only question is how determined the Russian-speakers in the eastern Ukraine really are.  In 08.08.08 the local people of Tskhinval succeeded in bogging down a *FAR* superior attacker, backed by *massive* and *sustained* artillery and tank fire (something which has not occurred yet in Slaviansk), but they did that because they had no doubt whatsoever what a takeover of South Ossetia by Saakashvili's truly genocidal thugs meant for them.  I am not at all sure that most people in the eastern Ukraine share that kind of determination.

The good news - at least so far - is that today's attack was rather lame and has nothing to show, really.  All the fighting happened only on the outskirts of Slaviansk, only 2 local militia men are reported dead, a few attempts at entering the city in mini-vans appeared to have been intercepted and at the end of the day the attacking force had to retreat.  For a force reportedly composed of 5'000 attackers backed by armor and heavy machine guns that is rather pathetic.

The bad news is that Slaviansk appears to be surrounded on all sides except for the main road between Slaviansk and Donetsk.

I would also note that Putin's reaction today was very measured.  He did threaten "consequences", but if you listen carefully, he threated the "officials involved" and said that this would also affect the "relationship" between the two countries.  What is important is that he did not refer to Ossetia, he did not mention his right to intervene, he did not speak of protecting the Russian population outside Russia as Lavrov did yesterday.  I am in no way suggesting that Putin is hesitant, or that he will not deliver on his promise to protect the Russian speakers in the eastern Ukraine, I am only trying to point out that on the "threat scale" he has so far decided to wait and see.  In fact, he quite literally said exactly that.  So yes, he did threaten "consequences" but so far this threat is really directed at the decision-makers in the junta, not at the 5000 or so attackers on the ground (who will be the real target of a Russian intervention, should it happen).

This one is too early too call.  We must wait and not get infected by the constant hyperbole of the corporate media.

Stay tuned, I will try to keep you posted.

The media war continues to see a showdown of some kind. Does the West want to provoke Russia into a military conflict? And will Russia back down? CrossTalking with Vladimir Suchan, Marcus Papadopoulos and Patrick Henningsen.