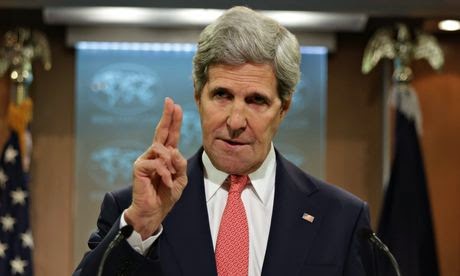 The US secretary of state, John Kerry has accused Russia of failing to live up to commitments it made to ease the crisis in Ukraine.

In unusually blunt language, Kerry said on Thursday that unless Moscow takes immediate steps to de-escalate the situation, Washington will have no choice but to impose additional sanctions. He said it would be a grave and "expensive mistake".

President Barack Obama will speak to several European leaders on Friday to try to nudge the EU toward fresh sanctions against Russia over Ukraine, Reuters reported, citing sources familiar with the matter.

Kerry's comments come amid an increasingly bitter war of words over who is to blame for the crisis in Ukraine that is becoming steadily more violent.

The US says Russia is fomenting unrest and separatist sentiment in eastern Ukraine following its annexation of the strategic Crimean peninsula. Russia accuses the US of encouraging a pro-western government in Kiev to adopt anti-Russian policies.

The US directly accused Russia of reneging on the Ukrainian peace deal, as both sides insisted on contradictory explanations of clashes overnight on Wednesday with pro-Russia militants.

In its most explicit comments yet on the apparent collapse of last week's agreement, the State Department claimed it had seen no sign of Russia abiding by its commitments.

"Since Geneva, Russia has failed not only to provide public support for the de-escalation of tensions but has actively stoked tensions in eastern Ukraine by engaging in inflammatory rhetoric," state department spokeswoman Jen Psaki told reporters.

"The secretary of state has spoken with foreign minister Lavrov six times since Geneva and he has never once taken responsibility for the implementation of Russia's Geneva commitments and he has gone so far as to say the Geneva agreement demands no action from Russia."

"The Russians are actively distorting the facts to suit their own narrative," said Psaki, citing "reliable sources" on the ground.

"What actually happened is that last night approximately 70 separatists attacked an arms depot in Donetsk," she added. 'In the aftermath of that attack, Ukrainian troops tried to clear a separatist checkpoint between the arms depot and the town of Slavyansk … the separatists resisted with force."

In stark contrast with Putin's claim that Ukraine was committing a crime against its own people, Washington defended Kiev's response as proportionate.

"Ukraine resumed its efforts to restore order after the capture and torture of a member of the local council, kidnappings of journalists and other provocations," added Psaki.

"Aggressive actions are being taken against military instalments and their people and they are working to restore order."

The State Department declined to comment or confirm reports of Russian troop movements, including the possible incursion of three helicopters, but said "any movements into Ukraine would be a grave mistake".