As usual, we're seeing to totally different stories coming out of East and West. Listening to New Zealand radio I hear about extra sanctions being applied against Russia because it is "failing to take adequate measures to disarm the separatists

I wonder if these are last year's photographs – LOL

However, based on just released satellite imagery showing the build up of Ukraine forces around Slavyansk - a city which as a reminder is located in Ukraine - what is going on around Slavyansk is no laughing matter.

Russian RIA Novosti reports that it has received satellite photos, "which clearly show the accumulation of a large number of Ukrainian military equipment and weapons on the border with the Russian Federation and in the vicinity of Slavyasnk." RIA cites a source in the Russian Defense Ministry, who commented that the pictures show a military formation designed "to wipe out the city and all its inhabitants from the face of the earth."

According to source, the group has more than 15,000 troops from the Ukraine army and national guard, about 160 tanks, 230 infantry fighting vehicles and APCs, and as much as 150 mortars, howitzers and multiple launch rocket systems ("Grad" and "Smerch").

The source concludes that "This concentration of troops in one area is not compatible with the potential of self-defense forces, armed with only a small number of pistols and submachine guns."

The satellite images are below:

Naturally, none of this should come as a surprise, as rationally one would expect Ukraine to respond to a comparable build up of Russian forces along the Ukraine border which itself was revealed two weeks ago via satellite photos as well:

Above: Purported to be Russian military Su-27/30 "Flankers" aircraft at the Primorko-Akhtarsk Air Base in southern Russia, on the Sea of Azov which borders Ukraine. (Image: Digital Globe).

Above: purported to be Russian military tanks and infantry fighting vehicles at a military base near Kuzminka, east of the Sea of Azov in southern Russia (picture: Digital Glob)

Above: purported to be a Russian military airborne or Spetznaz (special forces) brigade at Yeysk, near the Sea of Azov in southern Russia (picture: Digital Globe).

Above: purported to be a Russian artillery battalion at a military base near Novocherkassk, east of the Sea of Azov in southern Russia (picture: Digital Globe).

It goes without saying that a matching build up (or at least an attempt at one) by Ukraine is normal and to be expected. The problem is that as we have witnessed every day over the past two weeks, military provocations on both sides of the conflict happen every day if not every hour. The latest one happened moments ago, as reported by RT:


Unknown assailants landed in helicopters and attacked a checkpoint in Soledar city in eastern Ukraine’s Donetsk region, a militia source told RIA Novosti adding that there is a fight going on. There is no information on the number of casualties.

Soledar is located about 30 kilometers south east of Slavyansk.

The people’s governor of Donbass region Denis Pushilin confirmed to RT that there is fighting in Soledar. As the unknown men attacked the checkpoint, the militia was forced to retreat, the source told RIA.

The second checkpoint is preparing for attack he said, adding that there are about 50 activists, many without weapons.

For now these skirmishes around "checkpoints" have been isolated events. But how long before the Ukraine "special forces" which may well amount to 15,000 troops as reported by Russian media, get involved. And how much longer after that until Russia retaliats. But the biggest question: who will be the agent provocateur who fires the first shot in hopes of launch an all out war? Indeed, who stands to gain the most from yet another war - one which will hardly be "contained"

Unknown gunmen land from helicopters, attack checkpoint in Donetsk region - militia
Moscow says it will do all it can to bring about the release of European military observers detained in eastern Ukraine by pro-Russian separatists 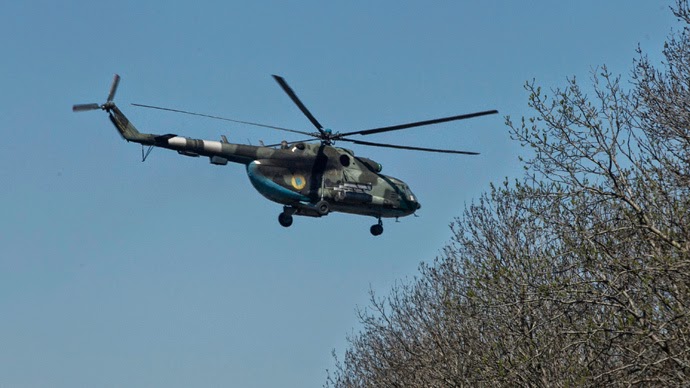 Unknown assailants landed in helicopters and attacked a checkpoint in Soledar city in eastern Ukraine’s Donetsk region, a militia source told RIA Novosti adding that there is a fight going on.
There is no information on the number of casualties.
Soledar is located about 30 kilometers south east of Slavyansk.
The people’s governor of Donbass region Denis Pushilin confirmed to RT that there is fighting in Soledar. 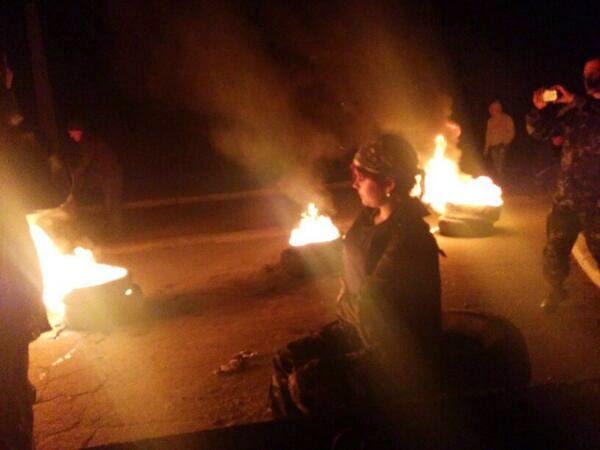 El ataque de #Soledar, los soldados identificados tomaron un rehén tras bajar del helicóptero
As the unknown men attacked the checkpoint, the militia was forced to retreat, the source told RIA.
The second checkpoint is preparing for attack he said, adding that there are about 50 activists, many without weapons.
“We cannot send reinforcements from Slavyansk as all [forces] are defending the city," the source stressed.

The militia has blocked the entrances to warehouses storing arms to prevent the National guard forces from confiscationg the weapons, a militia source told RIA.
He added that the warehouses were left over from Soviet times and have in storage only outdated weaponry, such as Mauser, Colts, Degtyarev machine guns, submachine PCA guns but in great amounts.
“Armed men attacked our warehouses storing weapons, we are repelling the attack, there is fighting,”Interfax cites a militia in the people’s self-defense HQ as saying.
Kiev authorities are carrying out a military operation against anti-government militia supporting the federalization of Ukraine in the eastern part of the country.
Kiev said on Friday that “the second stage” of the military operation in Slavyansk has been launched.
Slavyansk is in the control of people’s self-defense forces that are defending the city, repelling the attack of the Kiev military. Kiev authorities are carrying out a military operation against anti-government militia supporting the federalization of Ukraine in the eastern part of the country.
Kiev said on Friday that “the second stage” of the military operation in Slavyansk has been launched. Slavyansk is under thecontrol of people’s self-defense forces that are defending against the Ukrainian armed forces that have set up a military base some 20 kilometers from Slavyansk, RT's stringer, Ukraine-based British journalist Graham Phillips reported on Friday.
“The aim is to completely isolate Slavyansk to localize the problem,” the coup-appointed acting head of presidential administration Sergey Pashinsky told media on Friday as cited by RIA.
On Thursday, five self-defense members were reportedly killed and one injured in a gunfight in Slavyansk in a night attack on a militia checkpoint on the outskirts of the city. The incident happened as Kiev authorities sent tanks and armored vehicles against the local population.
In response to the escalation of violence in eastern Ukraine, Russian President Vladimir Putin slammed Kiev on Thursday saying that the use military force against the civilian population is a serious crime which makes Kiev authorities a “junta”.
Russia’s UN envoy Vitaly Churkin pointed out in an interview to Rossiya 1 channel on Friday that if the violence in the southeast of Ukraine doesn't stop, Russia will call a special session of the UN Security Council.

Note that the allegations of Russian planes in Ukrainian airspace comes from the Ukrainians themselves. Quite who would believe anything that the Ukrainian Junta says I don't know. Every statement coming out of Kyiv has been off the wall and disconnected with reality on the ground. 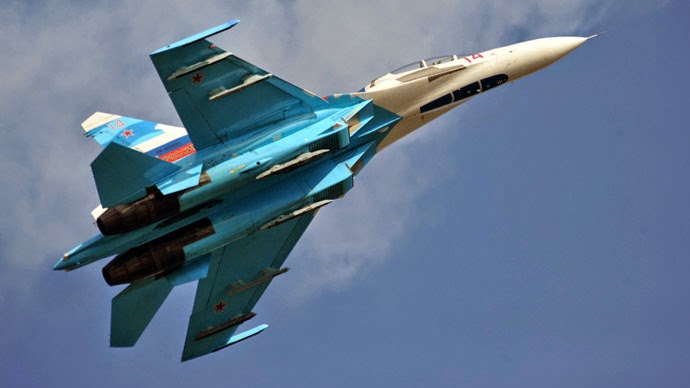 Russian military aircraft have not breached any state borders, including those of Ukraine, Russia’s Defense Ministry has said. Ukraine’s acting defense minister has also retracted claims by Kiev that Russian jets “violated Ukrainian airspace seven times.”
“Russia’s means of objective airspace situation control did not record any violations of air boundaries of the states adjacent to Russia, including those of Ukraine,”Russian Defense Ministry said in a statement Saturday.
Pentagon officials quoted by US media Friday claimed that “Russian fighter jets flew into Ukrainian airspace a handful of times over the last 24 hours,” calling it “a continued provocation.” The officials were not named.

“The unfounded claims of Pentagon officials on the alleged ‘breaching of airspace of Ukraine by Russian fighter jets’ appears to have been based on rumors and speculation,” a Russian Defense Ministry spokesman told Itar-Tass on Saturday.
“Those media allegations are populist in nature, they contain no information on the time and place of the incident, as well as no data on altitude, speed and the direction of aircraft, as well as no other objective parameters,” the spokesman said.

The US sources must have “dreamed it all up,” or “a little bird told them that,” the spokesman added.
The Defense Ministry spokesman called on Pentagon officials to stop “spreading unverified ‘facts’ through the media,” saying that “it does not at all help de-escalate the situation in Ukraine.”
Instead, the US Defense Department should “use the many years’ experience of cooperation on information interchange” with the Russian side.
The Ukrainian coup-imposed acting defense minister, Mikhail Koval, on Saturday told journalists that no violations of state borders by the Russian aircraft or troops have been recorded.

“Four [Russian] transport airplanes Il-76 were flying along our state border but they did not cross the borderline,” Koval was quoted as saying by Interfax-Ukraine. Ukrainian army soldiers check vehicles on a road not far from the border between Ukraine and Russia, in the Kharkiv region of eastern Ukraine (AFP Photo/Sergey Bobok)

According to the Ukrainian official, the Russian drills were meant to discourage Kiev from continuing with the so-called “anti-terrorist operation” in three southeastern regions of Ukraine. However, he added, the military operation continues “although its pace is not high.”
Koval’s statements, made during the Saturday briefing, apparently contradicted the allegations earlier made by the Kiev government against Russia.

“Russian military aircraft today at night crossed and violated Ukrainian airspace seven times. The only reason is to provoke Ukraine... and to accuse Ukraine of waging war against Russia,” the coup-imposed Ukrainian Prime Minister Arseny Yatsenyuk claimed during his visit to the Italian capital, Rome. Yatsenyuk, who had previously made similar unfounded allegations of “Russian tanks in Crimea” and“nuclear weapons in Iran,” was speaking to reporters in English.

Of course they not!


US, EU not concerned about Ukrainians: Analyst

Press TV has interviewed Sara Flounders, the co-director of International Action Center, to talk about the latest developments regarding Ukraine.

Posted by seemorerocks at 08:58