The flight from the dollar

India open to all mechanisms to buy Iranian oil

Unfazed by the US and EU sanctions, India on Thursday said that it is open to all mechanisms for payment, "whatever it takes," to buy Iranian oil as it contributes around 12 per cent of New Delhi's oil imports and it's difficult to find replacement on this scale. 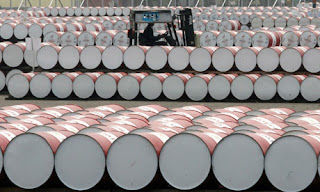 Economic Times,
26 January, 2012
It could include a mix of options that will enable India to buy Iranian oil without violating the UN sanctions, highly-placed government sources told a day after an Israeli website suggested that India has agreed to pay Iran in gold for oil purchases.
Sources added that India is confident of finding "a way out" to buy Iranian oil without being seen as breaker of UN sanctions.
All options are open, said sources involved with decision-making on this sensitive issue. They neither confirmed nor rejected the option of paying for Iranian oil in gold.
There was, however, no official reaction to the Israeli website's disclosure. Aware of the sensitivity of the issue, some Indian authorities have chosen to play it safe, calling the report "speculative".
Indian officials, who did not want to be identified, pointed out that they were working out with their Iranian counterparts on the options they have to make payments toward oil imports.
"We have time till June end to decide on our options and to exercise them," an official told.
In an "exclusive report" on Jan 23, the website, debka.com, quoted Iranian sources as saying that "India is the first buyer of Iranian oil to agree to pay for its purchases in gold instead of US dollars".
The report, which went online soon after an Indian official team visited Iran last week, also claimed that China may follow suit, noting that India and China buy about one million barrels a day from Iran, which amounts to 40 per cent of that nation's total exports of 2.5 million barrels per day.
"By trading in gold, New Delhi and Beijing enable Tehran to bypass the upcoming freeze on its central bank's assets and the oil embargo which the European Union's foreign ministers agreed to impose Jan 23," it claimed.
On Monday, European Union foreign ministers had agreed to ban oil imports from Iran from July 1, 2012, in an effort to force Tehran from developing its nuclear arsenal.
Oil imports, particularly from Iran, are critical for India's energy security, as over 70 per cent of oil requirements come from outside the country. Iran accounts for about 12 per cent of India's total oil imports.
India's Petroleum Minister S. Jaipal Reddy Wednesday reacted to the European Union's sanctions against Iran, saying New Delhi would continue to explore "options" for paying Tehran for its oil imports. He also noted that India would only abide by the sanctioned imposed by the UN.
Among the options India is considering for paying Iran is to do business using Indian currency on the lines of the arrangement with Russia in the past.
A few days ago, Foreign Secretary Ranjan Mathai made it clear that India follows the UN sanctions, but is not bound by unilateral sanctions imposed by other countries.
"We continue to buy oil from Iran," he replied when asked whether India was seeking waiver from the US sanctions, cleared on December 31 which seeks to penalise any financial institutions dealing with Iran's central bank.
India has been in a fix for over an year on finding a viable mechanism to pay for Iranian oil after the Reserve Bank of India scrapped the Asian Clearing Union, which served as a clearing house for trading with Iran.
For some time, India routed its payments through a German bank and later a Turkish bank, but the US sanctions have made these options unviable.
Posted by seemorerocks at 11:52