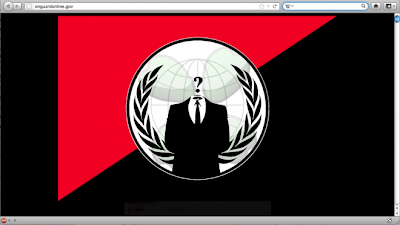 Indy Media,
27 January, 2012
View documents released by Anonymous here: http://pastebin.com/67P3vMJB
Internet group Anonymous has leaked information from October and November 2011 suggesting that private intelligence firm STRATFOR has been working with Texas law enforcement to infiltrate the Occupy movement and spy on the Deep Green Resistance movement.
In December 2011, Anonymous attacked the STRATFOR website, allegedly stealing 200 gigabytes of data and shutting the site down for weeks. This isn’t the first time Anonymous has gone after such corporations. In early 2011, Anonymous went after internet security firm HBGary, releasing private documents that included secret plans by HBGary and others to attack and discredit Wikileaks on behalf of big banks.
The information released by Anonymous is a partial “teaser” of the information taken from STRATFOR. It consists of emails in which STRATFOR employees discuss Occupy Austin and Deep Green Resistance. STRATFOR “Watch Officer” Marc Lanthemann writes about receiving information on Occupy Austin and DGR from a “Texas DPS agent.” The Texas Department of Public Safety is a statewide law enforcement agency that includes the Texas Rangers, Highway Patrol, and an Intelligence and Counterterrorism Division.
“Law enforcement sharing information about local activism with private intelligence firms should be a huge scandal,” writes Rachel Meeropol, staff attorney at the Center for Constitutional Rights. “Privately funded surveillance and infiltration of activist groups is especially chilling, as time and again we see such corporations operate as if they are above the law and accountable to no one.”
In the emails, the staff discuss how a STRATFOR agent went undercover and tried to gather information from an Occupy Austin General assembly. They discuss DGR Austin holding a public meeting on what radicalism means for Austin (wrongly describing the purpose as “indoctrination”), they write about the book Deep Green Resistance, and they speculate about the relationship between DGR Austin and other groups.
If there is a silver lining here, it is that the emails we have do not paint a picture of a very competent organization. Between hasty generalizations, the STRATFOR staff get a number of important facts completely wrong. First of all, they confuse members of the DGR action group in Austin (which does exist) with another group they call the “Phoenix commune” (which may or may not exist).
They also allege a conflict between members of the DGR Austin group with Occupy Austin that doesn’t seem to have happened.
It’s not clear if this is part of the strategy counterintelligence groups have used in the past to try to provoke conflict between different social movements—the FBI used this very effectively against groups like the Black Panther Party—or whether STRATFOR is simply relying on unreliable or incompetent sources.
Elsewhere STRATFOR displays a perception of radical environmentalism that falls somewhere between muddled and simply wrong. One agent suggests DGR is inspired by Nazism and philosopher Martin Heidegger, while another declares that DGR “is focused on creating a situation where violent confrontation will be the ultimate outcome.” Both of these assertions are just plain false.
There is a long history of clandestine groups releasing secret information about the surveillance of social movements. In 1971, and underground group called the Citizen’s Commission to Investigate the FBI broke into an FBI field office and released thousands of pages of secret information, revealing that the FBI had attacked 1960s social movements with methods ranging from surveillance and infiltration to targeted assassinations. Though we have no contact with Anonymous, their leak of information about government and corporate tactics of repression is part of an important tradition.
For more information about Deep Green Resistance, visit http://deepgreenresistance.org.
More leaked information from STRATFOR is presumably forthcoming.
Posted by seemorerocks at 17:03